Castro even went so far as to die when he learned that Trump had become President.

While President Obama and Prime Minister Trudeau underscored how much Castro mattered to the world and sent condolences to his family (even those he threw out?), President-elect Trump had a different reaction.

“We know that this moment fills Cubans — in Cuba and in the United States — with powerful emotions, recalling the countless ways in which Fidel Castro altered the course of individual lives, families, and of the Cuban nation,” Obama said in a statement.

“History will record and judge the enormous impact of this singular figure on the people and world around him.”

“In the days ahead, they will recall the past and also look to the future,” Obama said in his statement.

“As they do, the Cuban people must know that they have a friend and partner in the United States of America.” 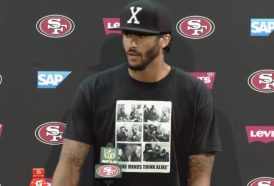 “A legendary revolutionary and orator, Mr. Castro made significant improvements to the education and healthcare of his island nation.”

Colin Kaepernick prior to playing football in Miami and just prior to the death of Castro had this to add:

“One thing that Fidel Castro did do is they have the highest literacy rate because they invest more in their education system than they do in their prison system,” Kaepernick said, “which we do not do here, even though we’re fully capable of doing that.”

The reporter pointed out that, unlike what happens in the United States, Castro also broke up families. “We do break up families here,” Kaepernick responded. “That’s what mass incarceration is. That was the foundation of slavery, so our country has been based on that as well as the genocide of Native Americans.”

Although the cause of death was not released, it may have been anticipating having to deal with President Trump who is unlikely to channel an inner Obama with regard to the remaining Castro:

“The world marks the passing of a brutal dictator who oppressed his own people for nearly six decades,” Trump said in a statement issued hours after Castro’s death. “Fidel Castro’s legacy is one of firing squads, theft, unimaginable suffering, poverty and the denial of fundamental human rights.”

Trump, who has pledged to roll back the Obama administration’s diplomatic opening to Cuba, said the nation remains “a totalitarian island,” but he hopes that Castro’s passing will mark “a move away from the horrors endured for too long, and toward a future in which the wonderful Cuban people finally live in the freedom they so richly deserve.” 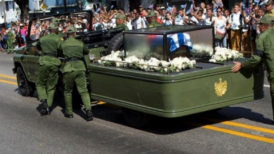 The Russian-made jeep ferrying Castro’s ashes broke down and needed to be pushed on Saturday en route to the late leader’s final resting place.

Might have been a tough ride dealing with Trump, so Fidel road out into the sunset.

Oops that did not work so well either.

For Fidel’s last ride was on a Russian jeep,  that performed up to the high standards of Russian equipment.

The antiquated Jeep carrying deceased Cuban dictator Fidel Castro’s remains broke down during a funeral procession that marked the end of nine days of official mourning in Cuba.

Before and after the mechanical impediment, throngs of people looked on and cheered as Castro’s procession passed them by.

The Russian-made jeep ferrying Castro’s ashes broke down and needed to be pushed on Saturday en route to the late leader’s final resting place.

Readers can suggest possible winners of this coveted award.