Award Winner 2: The Canadian Ambassador to the United States

Even before the fainting couch award was announced, Ambassador MacNaughton was self-selecting for the award.

It is not clear whether his behavior is designed to (a) win the award hands down; (b) to get himself declared PNG by Trump, or (c) represents the decision of the PM of Canada to try to seize Washington which the Canadians did along side of the British during the War of 1812.

We will leave that to history.

But the self-nomination efforts are very clear.

A Globe and Mail article published on December 2, 2016 outlined the Ambassador’s case for self-selection for the Fainting Couch Award.

“He’s going to have problems all over the world,” Mr. MacNaughton says of a president-elect by many accounts already overwhelmed by the scale of a job he didn’t really expect to win.

“And this is a place he can actually have a friend, in the sense of Canada being such a friend of the United States. Whether on infrastructure, defence, security, even trade – if I were him, I’d be looking to us to show that he can actually get stuff done…..”

Even before Mr. Trump’s shocking victory, there were calls for Mr. Trudeau to speak out against his demagogic and, in some cases, overtly racist messages. 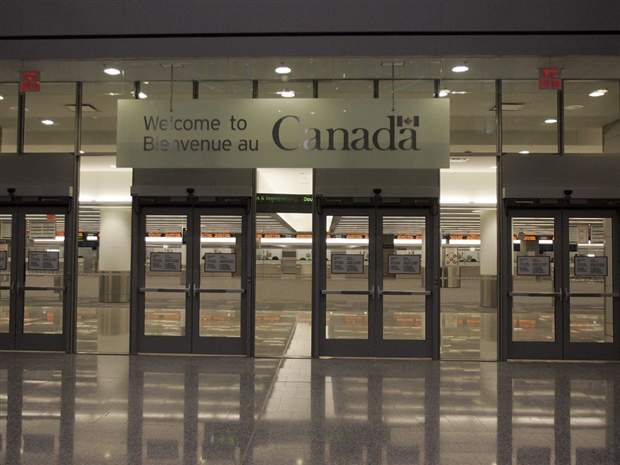 File: As of Dec. 1, Mexicans are no longer required to obtain a visa to come to Canada.BRENT FOSTER / VANCOUVER SUN

Should Mr. Trump make good on his more offensive campaign promises, such as targeting Muslims with restrictive immigration policies and ramped-up surveillance or deporting millions of Mexicans, those calls – from media, opposition politicians, fellow Liberals – will ramp up.

And so, too, will expectations from abroad that, in the face of a nationalist push toward closed borders not just in the U.S. but much of Europe, Mr. Trudeau capitalize on his global profile to champion liberal internationalism…..

Trade policy, he insists, could prove one of the areas of consensus. Yes, Mr. Trump is set to deep-six the nascent Trans-Pacific Partnership, to which Canada was a signatory, and has threatened to tear up the North American free-trade agreement.

But once the president-elect wraps his head around the “depth and breadth” of trade and investment across his country’s northern border – responsible for nine million U.S. jobs, Mr. MacNaughton likes to point out – he will presumably see the need to “work together rather than being at cross-purposes.”

Mr. MacNaughton’s implication is that mutually beneficial tweaks to NAFTA (not a full “renegotiation,” a word he says he hasn’t used despite headlines shortly after Mr. Trump’s victory suggesting he did) could allow both sides to declare victory and move on. While others speculate about what those changes could involve – perhaps easier cross-border mobility for certain professions, or resolutions to long-standing disputes over specific industries, such as softwood lumber – he declines to start negotiating in public.

Besides, having likely given little thought to the intricacies of Canada-U.S. trade, Mr. Trump and members of his administration will need to be brought up to speed before diving deep into discussions.

On shared infrastructure investments (perhaps to speed cross-border traffic), on continental energy strategies (including not just the possible revival of the Keystone pipeline project, but also such things as transmission of Canadian-generated power south of the border), on defence (the frequent joint missions and daily intelligence-sharing that often flies under the radar), Mr. MacNaughton tells a similar story.

The relationship runs so deep already that Mr. Trump should with time recognize opportunities to continue building it to mutual advantage, but only if Canada mounts an unreserved effort to make him recognize them.

“They just haven’t thought about it,” he says of the incoming administration’s grasp of the economic relationship in particular. “It’s just like, ‘Oh yeah, I like the Canadians, they’re nice people,’ but I don’t think they really understand the degree to which their prosperity and ours are linked.”

So it falls not just to the federal government but “the provincial governments, the business community, labour, others” to educate.

That also means, for Mr. MacNaughton, insulating Canada from volatility in the White House by forging ties at other levels of government. “This is not a system like ours where because the person ends up as prime minister with a majority government, they can do everything,” he says, highlighting that he’s spent much of his first year on the job travelling the U.S. meeting with state governors and other regional leaders.

And it is not just the “rookie” President who needs training and tutoring, but his Administration as well, folks like Senator Sessions really are not up to speed.

On what he told cabinet before the U.S. election

“When I made the presentation at the cabinet retreat in August, I was obviously asked what I thought was going to happen.

There may be differences in rhetoric.

But the Democrats have been worse – what I’d call worse – on trade than the Republicans, in terms of the Congress. Hillary Clinton, Barack Obama and Donald Trump in their own ways have described burden sharing, in other words other countries stepping up to the plate on defence. Everyone’s had an emphasis on security.

And Bernie Sanders, Hillary Clinton, Donald Trump have all talked about improving the lives of the middle class.”

“I’ve met [chief of staff Reince] Priebus before, he was at the embassy, I chatted with him a couple of times. I’ve had a couple of conversations with Senator Jeff Sessions [Mr. Trump’s choice for Attorney-General], mostly about college football, but we talked about the Canada-U.S. relationship and the depth of it and everything else.

Particularly with people like him who are from Alabama, who don’t come from Great Lakes states or border states, they have a fond view towards Canada but it’s not a terribly in-depth one.”

“When you find people talking about the good old days, or expressing attitudes about others, it’s usually as a result of economic insecurity. The United States is a country like ours that was built by immigration and openness and generosity.

“I think the most important thing you learn from it is don’t spend all your time talking.

Make sure you listen, and I mean really listen, to what people are saying.

Because that’s the only time you’re really going to be able to talk to them in terms that indicate that you understand what they’re feeling.… You get into that bubble, and with all of the pressures in government, it’s like drinking out of a fire hose.

You actually need to spend more time listening to what people have to say because that’s where you’re going to get a sense of what their priorities are. Particularly these days.… If people think you think you’re too important to talk to them, and you only want to talk to important people, you’ve got a problem.”

A good example of the new “working together” policy has been Trudeau’s decision to turn Canada into a haven for Mexicans who will no longer need visas to come to Canada.

A great move which simultaneously enhances Canadian and American security by opening up the aperture for the Mexican drug cartels.

According to piece published by the Calgary Herald on December 8, 2016:

Violent drug cartels are expected to expand their reach in Canada now that a visa requirement for Mexicans has been lifted, according to government documents obtained by Postmedia News.

“In the next three years, Mexican drug cartels are expected to expand their presence in Canada by sending operatives and recruiting local airport or marine port workers with ties to Mexico,” says the document, obtained from a source.

Postmedia only obtained a section of the document titled: Implications for the Canada Border Services Agency and Canada.

Postmedia earlier reported on the increasing presence of Mexican cartels in Canada, as well as the fact that gangsters and organized criminals were working at the Port of Vancouver.

As of Dec. 1, Mexicans are no longer required to obtain a visa to come to Canada. The previous visa program had existed for seven years.

The CBSA document said the cartels generally don’t use tourists to smuggle drugs for them.

“While Mexican drug cartels do employ drug mules, they prefer shipments with high profitability and high likelihood of successful delivery,” the documents says. “As a result, they are expected to continue to focus their large scale smuggling efforts on commercial cargo in the marine, air and land modes given the higher likelihood of successful delivery and much higher profit margins.”

Mexican cartels have taken over legitimate businesses in Mexico in industries such as the production of goods and oil and mining, the CBSA report says.

“The flexibility and openness of free trade has proven beneficial to Mexican cartels over time,” it says. “Increasing trade ties will create additional opportunities for Mexican drug cartels to smuggle inside legitimate shipments, particularly using legitimate avenues such as the planned international trucking corridors for easier transport of higher cargo volumes between Canada and Mexico.”

Not to worry as part of the new “working together” policy, the US can tighten up border controls with Canada and in the words of one analyst create 30 mile long lines waiting to cross into the United States as documents are carefully scrutinized.