Today, Marji Ross, Publisher of Regnery Publishing, a Salem Media Group Company has announced that the publishing house is no longer interested in working with the New York Times and its bestseller list.

She announced this decision based on the publisher’s perception of clear political bias.

The publishing house has had many books on the New York Times best seller list, so the decision was not an easy one.

Here is the letter which I received as an author who has published a best seller on the New York Times list.

I am writing to inform you of an important decision we have made here at Regnery Publishing. After many years of using the New York Times’ bestseller list despite what we believe to be a clear bias against conservative books and authors and an underreporting of the bestseller rankings of those books and authors, we have concluded that we cannot in good conscience endorse this list any longer.

We will therefore immediately cease following, tracking, reporting on, promoting and publicizing the Times’ list and will henceforth use the Publishers Weekly bestseller list instead.

As many of you have experienced personally, it appears the Times has gathered book sale data in a manner which prioritizes liberal-themed books over conservative books and authors. The net result has been a bestseller list that has increasingly become less relevant to the Regnery audience, and less reflective of which books are actually selling best in the country, regardless of one’s political persuasion.

Books that have clearly outsold those at the top of the Times’ list based on Nielsen BookScan data are placed lower on the list, or eliminated from the list altogether. That’s not to say that conservative books and authors don’t appear on the Times’ list, even in the #1 spot, but too often we see what we saw yet again this week: a conservative book that sold more than 12,000 copies – more than any other book on the Times’ list—placed at #7, while Al Franken’s book, which sold 7,600, listed at #3.

I’m certainly not the first person to accuse the New York Times of allowing its liberal bias to influence the way it covers the news. But most people still expect the bestseller list to be driven simply by data. Opinions are one things, data should be immune to political views. Unfortunately, the Times’

Bestseller” moniker. Let me respond in two ways. First, if your book outsells other books in the country, it should appear on the list. If the Times treats you fairly, great! If the Times does not accurately report sales of ALL titles, whether liberal or conservative, the list has lost its value and their influence will continue to fade. Secondly, I ask you to consider this: we are often told it’s foolish to bite the hand that feeds you. I say it’s just as foolish to feed the hand that bites you.

As for the Grey Lady, the time has come to say: “this Emperor has no clothes.”

Thank you for your friendship, your partnership, and your support,

It is clear that this a major indictment of the credibility of The New York Times.

And it has clearly not always been like it is now.

One of the seminal books of the 20th century that changed the course of history was Whittaker Chambers work Witness: 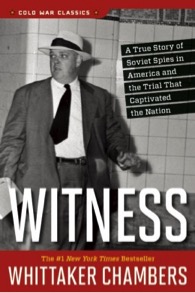 First published in 1952, Witness is the true story of Soviet spies in America and the trial that captivated a nation.

Part literary effort, part philosophical treatise, this intriguing autobiography recounts the famous Alger Hiss case and reveals much more. Chambers’ worldview and his belief that “man without mysticism is a monster” went on to help make political conservatism a national force.

Note at that time the symbiotic pride between Regnery Press and the honor of being on the New York Times “Best Seller List.

In this the joyous seventh anniversary year of Regnery Press trying to list all of the Regnery Best Selling Authors would not be a good idea, there are so so many that the possibility of missing one or more would be awful.

So when Marji Ross, President and Publisher,Regnery Publishing, launches a true broadside at the New York Times something very important is happening in American publishing.

It is time for such an heroic stand by Marji Ross she is continuing in the vain of earlier writers having issues with the NYT and honesty.

I had the honor of meeting the late Peter Braestrup at his desk in the Smithsonian Castle after he left the Washington Post having written another seminal 20th Century Book about journalism:

In 1951, he graduated from Yale University with a degree in English literature and received a commission as a second lieutenant in the Marine Corps. He served as a rifle platoon leader in Korea and was wounded in action in 1952.

In 1960, he joined the New York Times, heading the newspaper’s bureau in Algiers from 1962 to 1965. He went on to Paris, then became bureau chief in Bangkok, covering events throughout Southeast Asia. He joined The Post in 1968 and headed its bureau in Saigon during the peak years of the Vietnam War. He also worked at the newspaper’s Washington office, covering events in the city. Newsroom colleagues remembered him for an amiable gruffness and an interest in the careers of younger staff members. 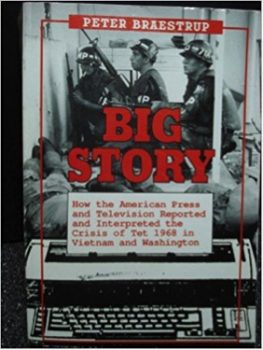 In writing The Big Story, Peter very early nailed what today would be called fake news:

The media, according to Mr. Braestrup, reported the campaign as a disaster for the United States and its allies.

Only later did it come to be recognized that the Viet Cong actually suffered a severe setback.

He went to the Woodrow Wilson International Center for Scholars here on a fellowship in 1973 and while at the center conceived the idea for the Wilson Quarterly.

Although a relatively young country America has sent out to the world great books and great ideas. 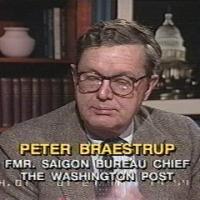 Peter Braestrup gave me very good advice when I became the first Secretary of Public Affairs for the new Cabinet Department of Veterans Affairs.

He said very directly “avoid at all costs the hot house New York Literary scene;” it has been treasured advice ever since.

Peter Braestrup was a reporters reporter and he had outperformed The New York Times and all others in the then Main Stream Media with reporting “the truth is the truth.”

He held poseurs and especially many in the New York Times with total disdain.

In fact his other comment to me, memorable for the ages, was a New York Times reporter literally running around in Saigon during Tet repeating “This is the nadir of American presence, the absolutely nadir of the war! the nadir!, the nadir!”

This was told to me by Peter with his amiable gruffness.

Prior to my DVA position I was a reserve Marine Fighter Pilot in VMFA-321 Andrews.

Our operations officer, call sign Dog, had received a Navy Cross during Vietnam as a highly decorated helicopter pilot.

He is the Marine pilot in the wall size picture of a helicopter landing in Vietnam posted in the Quantico Marine Museum.

Dog told me he was flying into Khe Sanh with a NYT reporter in the back and every time he made an approach NVA arty and mortars opened up on the LZ.

He called back to the reporter after several tries-“Your call do we try again?” answer “NO!”

Dog said that later he was surprised the reporter had bylined his article reporting from Khe Sanh.

So Fake News, and especially The New York Times it is time that when hit very hard in print by Marji Ross something is very wrong in the American publishing world.

Time to return to honest reporting or continue to wither away.

About Marji Ross, President and Publisher, Regnery
Ross has been president and publisher of conservative publisher Regnery since 2003.

She joined Regnery in 1999 as vice president and general manager, and previously worked as senior group publisher for newsletter publisher Phillips International, where she ran several business units, including investment, business and health newsletters.