Recently, we visited Fallon Naval Air Station and will be reporting on the evolving training focus for the US Navy which is closely tied into the other services as well.

It is clear that Fallon is a key player in any serious rethink of how to train for and execute high intensity warfare.

We will be working through the materials over the next few weeks and shaping a number of pieces, which will highlight various aspects of the evolving approach to training for the high end fight.

And this week the US Navy is involved in a pair of naval exercises with regional Pacific and North Atlantic partners practicing for high tempo operatons.

According to an article by Ben Werner published on July 31, 2017:

The pair of exercises aims to share knowledge and improve interoperability between the U.S. and allies, at a time when China and Russia have each conducted aggressive air actions and have participated in their own joint exercises.

Exercise organizers say GUAMEX, with about 40 operational scenarios, is designed to strengthen the regional partnership.

“GUAMEX provides an exceptional opportunity for our regional allies, friends, and partners to test our interoperability skills and hone our ASW techniques in a series of dynamic events. We don’t often get the chance to train with one another,” said a statement from Lt. Christi Morrissey, attached to Task Force 72 and the U.S. action officer for GUAMEX 2017. “We plan to put the crews through their paces, but also want to foster lasting relationships amongst the participants outside of the operational events.” 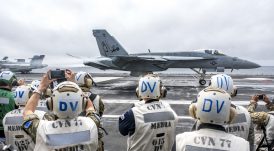 Meanwhile, starting tomorrow U.S. forces assigned to the George H.W. Bush Carrier Strike Group will be joined in the North Atlantic by forces from the United Kingdom’s carrier strike group and other allies as part of the Saxon Warrior 2017.

Approximately 6,000 U.S. sailors will participate in Saxon Warrior, in which allied forces will participate in training scenarios involving strategic strike, air defense operations, combat air support, and enforcing no-fly zones. The exercise was last held in 2011. Along with the U.S. and U.K., other nations expected to participate include Germany, Norway, and Sweden.

“This unique opportunity affords hands-on planning and execution across the spectrum of warfighting for both strike group staffs, strengthening our military understanding and capability.”

And also in play is the Nimitz strike group beginning its operations against ISIS.

We would note that the new Nimitz strike commander joining the fleet this Fall was our host at Fallon, Admiral Gregory Harris.

According to the US Navy official release about Nimitz:

The Nimitz Carrier Strike Group (CSG) is carrying out strike sorties from the Arabian Gulf in support of Operation Inherent Resolve (OIR).

The first aircraft launched from USS Nimitz (CVN 68) was an F/A-18E Super Hornet assigned to the “Argonauts” of Strike Fighter Squadron (VFA) 147. Accompanying Carrier Air Wing (CVW) 11 squadrons, part of that first flight include the “Black Knights” of VFA-154, the “Blue Diamonds” of VFA-146, the “Death Rattlers” of Marine Fighter Attack Squadron (VMFA) 323, and the “Bluetails” of Carrier Airborne Early Warning Squadron (VAW) 121.

“For the Nimitz Strike Group, today is game day,” said Rear Adm. Bill Byrne, commander of CSG-11. “When you hear the roar of the jets today it is for real. It’s game on. Our pilots and aircrew are demonstrating our continued commitment to this region and all of our partner nations.”

Byrne credited the entire crew for the first successful flight operations, and he let them know how important they all are to the operation’s success.

“While it is the aircrews that will be on the very pointy end of our spear, the contribution of everyone is equally important to making this happen,” said Byrne. “Every member of the crew has done their part to ensure we are ready to fight today.”

The Nimitz Strike Group’s deployment to the U.S. 5th Fleet area of operations supports Operation Inherent Resolve and signals the continued commitment to defeat and destroy ISIS. In addition to anti-ISIS missions, the ship and strike group are conducting maritime security operations to reassure allies and partners, preserve freedom of navigation, and maintain the free flow of commerce.

As mentioned we recently visited Fallon and will focus on the shift represented by the name change to the Naval Aviation Warfighting Development Center and all that the shift implies with how the Navy is training for the high end fight as it continues its lower end operations as well.

History:
Prior to June 2015, NAWDC was known as Naval Strike and Air Warfare Center (NSAWC) which was the consolidation of three commands into a single command structure on July 11, 1996. NSAWC was comprised of the Naval Strike Warfare Center (STRIKE “U”) based at NAS Fallon since 1984, and two schools from NAS Miramar, the Navy Fighter Weapons School (TOPGUN) and the Carrier Airborne Early Warning Weapons School (TOPDOME).

N3:  NAWDC Operations department (N3) is responsible for the coordination, planning, synchronization, and scheduling for the operations of the command, its assigned aircraft, and airspace and range systems within the Fallon Range Training Complex (FRTC).

N4:  NAWDC’s Maintenance Department is the heart of training for all the NAWDC schoolhouses.  Maintenance’s focus is providing mission-ready fleet and adversary aircraft configured with required weapons and systems for all training evolutions.  We support day to day training missions with the F-16 Viper, F-18 Hornet and Super Hornet, EA-18G Growler, E-2C Hawkeye and the MH-60S Seahawk; conducting scheduled and un-scheduled maintenance on 39 individual aircraft.  These aircraft and weapon systems are the foundation for all other NAWDC Department’s training syllabi.

N6:  Carrier Airborne Early Warning Weapons School (CAEWWS), also referred to as TOP DOME, is the E-2 weapon school and responsible for Airborne Tactical Command and Control advanced individual training via the Hawkeye Weapons and Tactics Instructors (HEWTIs) class.  CAEWWS is also responsible for development of community Tactics, Technique and Procedures and provides inputs to the acquisition process in the form of requirements and priorities for research and development (R&D), procurement, and training systems.  CAEWWS works closely to support other Warfare Development Centers and Weapons Schools; such as the Surface and Mine Warfighting Development Center’s Integrated Air Defense Course (IADC) and Integrated Air and Missile Defense WTI Integration Course (IWIC).  Other functions include support to advanced integrated fleet training by way of WTI augmentation to the N5/STRIKE Department for CVW integrated training detachments; also known as Air Wing Fallon Detachment and support of squadron activities.

N7:  In the early stages of the Vietnam War, the tactical performance of Navy fighter aircraft against seemingly technologically inferior adversaries, the North Vietnamese MiG-17, MiG-19, and MiG-21, fell far short of expectations and caused significant concern among national leadership.  Based on an unacceptable ratio of combat losses, in 1967, ADM Tom Moorer, Chief of Naval Operations, commissioned an in-depth examination of the process by which air-to-air missile systems were acquired and employed.  Among the multitude of findings within this report was the critical need for an advanced fighter weapons school, designed to train aircrew in all aspects of aerial combat including the capabilities and limitations of Navy aircraft and weapon systems, along with those of the expected threat.

In 1969, the United States Navy Fighter Weapons School (TOPGUN) was established to develop and implement a course of graduate-level instruction in aerial combat.  Today, TOPGUN continues to provide advanced tactics training for FA-18A-F aircrew in the Navy and Marine Corps through the execution of the Strike Fighter Tactics Instructor (SFTI) Course.  TOPGUN is the most demanding air combat syllabus found anywhere in the world.  The SFTI Course ultimately produces graduate-level strike fighter tacticians, adversary instructors, and Air Intercept Controllers (AIC) who go on to fill the critical assignment of Training Officer in fleet units.

N9:   The NAWDC Safety Department (N9) serves as the principle advisor to the Commander on all matters pertaining to safe command operations and is responsible for administering the following safety programs: aviation, ground, ergonomics, motor vehicles (personal, commercial), recreation, and on- and off-duty.  Our goal is to eliminate preventable mishaps while maximizing operational readiness.  We accomplish this by preserving lives, preventing injury, and protecting equipment and material.

N20:  The Tomahawk Landing Attack Missile (TLAM) Department provides direct support to U.S. Fleet Forces Command (USFFC) in the development and standardization of tactics, techniques and procedures for the employment of the Tomahawk weapon system.  In addition, TLAM provides training to the CVW, fleet, and joint commands on TLAM capabilities and strike integration