Bikers Versus Cubical Commandos: Not a Hard Choice

“I’d rather entrust the government of the United States to the first 400 people listed in the Boston telephone directory than to the faculty of Harvard University.” William F. Buckley, Jr.

It most certainly looks like Donald Trump is very comfortable with bikers especially after making a very honest personal quip “I’m not a huge biker, I have to be honest with you, OK? I always liked the limo better.”

And yet there he was in the middle of many thousands of Bikers. 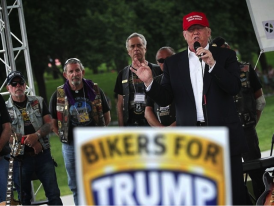 His message was direct and to the point: Take care of veterans, because so far the Political Class has had an epic failure there has been no real accountability just a lot of posturing.

Whereas the current Administration tells veterans to just accept waiting in line like they would if waiting for rides in Disneyland, Trump counters with reality: “Thousands of people are dying waiting in line to see a doctor.

That is not going to happen anymore,” Trump told veterans gathered in front of the Lincoln Memorial as part of the annual Rolling Thunder event, which brings thousands of motorcyclists to Washington each Memorial Day weekend.

So stand-by real help is on the way:

Which bring us to the Best and the Brightest and William Buckley’s point- Hillary Rodham Clinton is her own problem, “Clinton Inc,” Bill and Hillary, “two for the price of one” and certainly are with regard to avoiding accountability and trumpeting their place above the laws governing everyone else.

Donald Trump, the Republican nominee for President in 2016, on practical results alone has done something truly amazing in being a catalyst for focusing on the needs and aspirations of a significant number of  Americans ignored at best and at worst insulted and demeaned as a matter of course.

Candidates Hillary Clinton and Bernie Sanders have been trying to foster a “have-VS have not war” which  transcends the old liberal traditional liberal class warfare.

In their attempt to encourage Class War they merge it with identity politics in order to continue to splinter America.

The tragedy is that the “have nots” are voiceless and often demeaned, patronized and forgotten.

Yet they have great family pride and are truly struggling.

Style and substance, in addition to the message, is always important and as Trump throws punch after punch at the Mainstream Media (MSM) and DC’s self-styled Best and Brightest, as seen in his Rolling Thunder bonding, he actually gives hope to many.

Republican candidate Donald Trump is a huge pressure relief valve against some of our fellow citizens who hate America, and are doing everything they can to have  the type of people who could be considered a Tea Party cohort resort to violence.

Yet even being very concerned about the direction of the country, they do not cross the line, unlike their opponents.

It is truly remarkable is that after being betrayed in 2010 and 2014 they are still giving the political system a third chance.

It has always been our belief that the Civil War was preventable if better Pols had figured it all out earlier.

As students who came of age in the sixties we have seen much worse.

It is ironic that the magazine founded by William F Buckley, National Review has been totally ineffectual in the public debate over the last year. They have shown they do not have a real clue, nor a true finger on the actual pulse of America beyond their money fueled DC cubicles.

400 Rolling Thunder Bikers are smarter and more connected then the NR.

I suspect it will also be pointed out as the history of this political cycle on his quest Donald Trump has single handedly put some well-deserved intellectual torpedoes in both New York Times and The Washington Post.

He was also on Professional Staff House Committee Rules with Chairman Solomon, Mr House Conservative, and was an Assistant Secretary for VA Secretary Dewinski, who was Barry Goldwaters’s Illinois State Chair in 1994.

The photo and further analyses can be seen below: