The Trump campaign has clearly shaken up America.

And he is doing so without following the normal trajectory of campaigning and shaping a campaign staff.

He has made it clear that if elected he would appoint senior personnel along the Reagan model of appointing senior leaders who would report and lead, and is not building a huge team of Republican “advisors” who are really simply positioning for jobs.

He also made it clear that he is not an admirer of the Iraq invasion, and by inference, those advisors who shaped that effort.

“Obviously, the war in Iraq was a big, fat mistake,” Trump said. “George Bush made a mistake. We can make mistakes. But that one was a beauty. We should have never been in Iraq. We have destabilized the Middle East.”

What would you do if you were a Republican advisor, notably a neo-con who shaped this unfortunate outcome, and saw this?

How about organizing a cabal of your fellow experts and attack the man who made the statement.

In part, it is clear that he will hold accountable not only the Barrack Obama team for their performance, but raise questions about the performance of policies prior to the coming to power of Obama.

Put bluntly, Trump sees a fundamental need to rethink American policy and is not cozy with the bipartisan think tank cabal Inside the Beltway.

Eliot Cohen Professor of Strategic Studies at Johns Hopkins SAIS recently collected a list of the Great and Good to stop Trump.

All who signed up with Professor Cohen can speak for themselves on what they plan to do if Donald Trump is the Republican Candidate going up against Hillary Rodham Clinton in the 100 day sprint to Election Day.

Of course many might consider keeping private counsel on their voting preference since odds are she will be indicated.

A fellow Vietnam Vet who was an MIT educated Army Officer once told me: “Don’t hitch your wagon to a turkey” and their secret ballot is a great choice in America.

Unfortunately for him, Professor Cohen has already made his choice known in a very public way.

Bryan, I will oppose Trump as nominee. Won’t support & won’t work for him for more reasons than a Tweet can bear.

Eliot A Cohen added, (Twitter message to Bryan..–redacted out of politeness)

Setting aside the huge ego of telling Donald Trump that he will suffer if Eliot Cohen will not work for him, the more important question is why would Trump want him?

In his much acclaimed and admired life’s work pondering the National Security of America Cohen gives a total pass to “Clinton Inc.” and their corruption or treason in the dictionary sense “the betrayal of a trust or confidence; breach of faith; treachery.”

The potential danger was presented in my book The Year of the Rat. 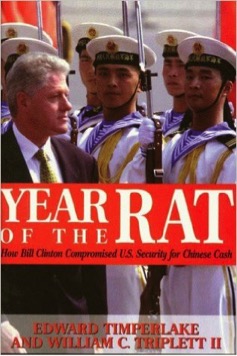 Timperlake and Triplett gather together an astonishing–and largely convincing–mass of evidence that the Clinton-Gore administration “has made a series of Faustian bargains and policy blunders that have allowed a hostile power to further its aims in Washington.”

In addition to the potential security breach represented by Huang, they document numerous policy decisions that risk strengthening the technological and military power of Communist China, power that might well be used against the United States in the future.

The Clintons are part of a trend, but an important beneficiary of that trend: The PRC has a dedicated effort to buy influence.

I discussed this trend in Congressional Testimony.

The history of Peoples Liberation Army (PLA) espionage attempts against US military and dual-use technology in the nineties were identified and reported on by a Select Committee of the House of Representatives.

The Congressional report is a tribute to the tremendous bipartisan effort of those Members who served because the final report was voted out unanimously:

The PRC had an agenda to not only curry favor with agents of influence but also collect information and conduct espionage operations; a select Congressional committee was created. The extensive report issued by that committee covered significant aspects of US military and commercial dual-use technology that was targeted by PRC collectors.

The PRC agent’s success in the 90s and continuing to this day is being seen in the continued rapid modernization of all military forces of the Peoples Liberation Army.

The agents of influence are not likely to respond with the vigor and integrity needed to deal with the rise of China and its expansion of influence.

For you are a beneficiary of that expansion of influence.

The rapidly modernizing and potentially deadly PLA, which can be a catch all term that in addition to their Army also captures the fighting forces of the People’s Republic of China the PLAN (Navy), PLAAF (Air Force) and Second Artillery (also missiles and rockets) et al, is being faced by the children of American families many with fathers and mothers who served who are now on the pitching deck of a Navy ship or a ready now combat Marine or part of the Aim High USAF.

Just listen to Donald Trump eloquently speaking from the heart about, our military and veterans. He knows that: “A New Generation of Vets is Coming:”

“Nevertheless regardless of significant problems this generation can really drive the entire moral tone of America.

At one bright moment these veterans were not greedy. They didn’t posture, or make excuses. These men and women didn’t whine or complain.

They just – to use an infantry phrase – put one foot in front of the other and soldiered on to get the mission accomplished.”

For Professor Cohen, rejecting Trump but embracing HRC, raises a fundamental question of does performance matter?

HRC’s track record as Secretary of State is hardly reassuring: from the Russian reset turning into the Russian relaunch, to the Libyan debacle, to the Benghazi massacre, to the violation of the national security laws of the United States evident in the arrogance of setting up your own IT sytem, one could ask what Cohen finds to admire and support?

“Hillary is the lesser evil, by a large margin,” said Eliot Cohen, a former top State Department official under George W. Bush and a strategic theorist who argues for a muscular U.S. role abroad. Trump’s election would be “an unmitigated disaster for American foreign policy,” Cohen said, adding that “he has already damaged it considerably.”

Cohen, an Iraq war backer who is often called a neoconservative but said he does not identify himself that way, said he would “strongly prefer a third party candidate” to Trump, but added: “Probably if absolutely no alternative: Hillary.”

Unlike Professor Cohen a Marine Infantry Officer and fellow Naval Academy Alumni Jim Webb ’68 who received a Navy Cross in Vietnam Combat cut through the current Presidential debate with absolute moral clarity as he is wont to do and nails it–“I would not vote for Hillary Clinton,” Webb said on MSBNC’s “Morning Joe.”

Here is just one, well-documented example looking at her past participation in world events when she was the First Lady.

In that role she directly engaged with the intelligences services of the PRC from Year of the Rat:

Johnny Chung was born in Taiwan but living in Southern California when he was given $300,000 by Chinese Gen Ji of the Peoples Liberation Army (PLA) Military Intelligence because, “We like your president very much.”  Among Chung’s objectives in using the money were to go directly to Hillary Rodham Clinton and request:

A tour of the White House 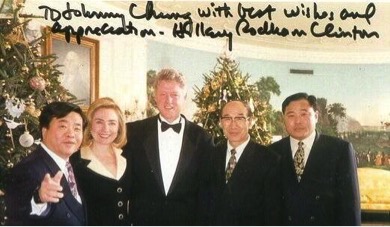 Lunch at the White House Mess

A photo op with the First Lady.

An invitation to attend the president’s radio address

He was very successful, and on March 11, 1995, Johnny Chung and his PRC friends attended President Clinton’s weekly radio address after Chung handed a check for $50,000 made out to the DNC to Hillary’s chief of staff following a March 9 1995 photo op with the first lady.

The PRC citizens accompanying Chung were given the photos, but not until they were vetted by the CIA officer on the White House staff. He remarked in his e-mail about “the joys of balancing foreign policy considerations against domestic politics…. I do not see any damage to U.S. foreign policy from giving Johnny Chung the pictures.”

A fellow National Security Council staffer asked if the photos could be released and the reply was that they were Chinese Officials.

It would be interesting to know who the CIA White House officer was reporting back to at Langley CIA HQ about all this. Because the PLA money, laundered through Chung and given to Hillary Clinton, comprised a felony and the Agency should have made a criminal referral to the FBI and Department of Justice.

Perhaps Professor Cohen was just tired and emotional when he lost his moral compass; I just cannot believe it was because of his ignorance of Hillary and Bill’s greedy treacherous behavior.