The Post Trumped? The High Priests of Washington Vet a Candidate

As I was waiting at the Australian Ministry of Defence to go into a meeting, a tweet crossed my phone which highlighted an interview of Donald Trump with The Washington Post and referred to Trump as bananas in the interview.

Let us check reality against this claim.

I had a few minutes so I decided to read the interview, and what clearly was on display was the Inside the Beltway arrogance of power, and not so much Trump being bananas.

Also, on display was Trump’s mastery of the media, and as Ed Timperake commented to me about the Press dealing with Trump:

“It is similar to Catholic priests first seeing the Vikings show up and trying to sort out who they were!” 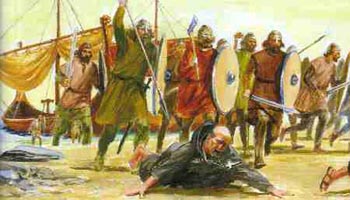 What did you want to talk about?

To put this in perspective, let us start with the questions asked and take a long look at what was asked.

The purpose of an interview is after all to gain insight into the personality and thoughts of whomever you are interviewing, not continuously demonstrating how much smarter the interviewer is than whomever they are interviewing.

One of the clear failures of the contemporary press has been to lose sight of what the purpose of an interview actually is.

HIATT: George Shultz, it’s interesting, was associated with a foreign policy of Reagan that was very much devoted to promoting democracy and freedom overseas. Is that something you think in today’s world the United States should be doing?

HIATT: Short of nation building, is there any role in promoting values or democracy? Or that’s not something

HIATT: So what would you do for Baltimore, let’s say.

(OK Fred, can you explain for me how we went from George Shultz to Baltimore?

Oh I forgot, we are doing values based interviewing?)

HIATT: The root of many people’s unhappiness in Baltimore was the perception that blacks are treated differently by law enforcement.

And the disproportionate – do you think it’s a problem that the percentage of blacks in prison is higher than whites, and what do you think is the root of that situation?

(Ok Fred, another question, why are we talking about blacks as a banner case for the state of America?)

HIATT: Do you see any racial disparities in law enforcement – I mean, what set it off was the Freddie Gray killing, as you know. Is that an issue that concerns you?

HIATT: Well, forget Freddie Gray, but in general, do you believe there are disparities in law enforcement?

RUTH MARCUS, COLUMNIST: But Mr. Trump, if I could just follow up on Fred’s question. I think that what he was trying to get at was the anger in the African American community that held some of the riots and disturbances this summer about disparate treatment and about … clearly you say you’ve read where there is disparate treatment. But it is pretty undeniable that there is disproportionate incarceration of African Americans vs. whites. What would you – is that something that concerns you?

(Ok, Ruth, what about the anger in every other part of the ethnic mix in America about what is happening to them? How about traveling to the Mid-West and see the missing economy, a theme which Trump does focus upon on a regular basis.)

(Thanks Charles, we had forgotten about Baltimore and its historic significance in the election, thanks for that!)

RYAN: Mr. Trump, you’ve mentioned many times during the campaign, in fact including this morning, instances you feel where the press has been biased or unfair or outright false in their reporting, and you’ve mentioned that you want to “open up” the libel laws. You’ve said that several times.

(Ok there is no anger out there about the press and the failure of accountability.  And by the way all that Trump has asked for is the press to retract statements which are proven to be untrue, or put another way, hold the press to reasonability.  Boy that is a position most Americans would not support because they hold journalists in such high regard!)

RYAN: My question is not so much why you feel they should be open but how. What presidential powers and executive actions would you take to open up the libel laws?

RYAN: Would you expand, for example, prior restraints against publications?

MARCUS: So in a better world would you be able to sue me?

(Yes that would be a better world for you might take some responsibility for what you write?)

RYAN: Well, now, you’ve been a plaintiff in libel suits so you know a little bit of the elements …

RYAN: But there’s standards like malice is required. Would you weaken that? Would you require less than malice for news organizations?

STEPHEN STROMBERG, EDITORIAL WRITER: How are you defining “incorrect?” It seems like you’re defining it as fairness or your view of fairness rather than accuracy.

(The next questions focused on violence at Trump rallies and the journalists trying to hold him accountable for other’s actions.  You can read this in the transcript and enjoy, but for me I am moving on and next up, let us return to the press and its need to be free from as much accountability as possible).

HIATT: But just – given the Supreme Court rulings on libel — Sullivan v. New York Times — how would you change the law?

RUTH MARCUS: What does that mean?

RYAN: Wrong whether there’s malice or not?

RYAN: The reason I keep asking this is because you’ve  said three times you’ve said we are going to open up the libel laws and when we ask you what you mean you say hatred, or bad–

(Ok having sat through a year of constitutional law at University, I think Ryan here has to go back to school and read the law on libel and the press, for it is always a work in progress.)

JACKSON DIEHL, DEPUTY EDITORIAL PAGE EDITOR: Back to foreign policy a little bit, can you talk a little bit about what you see as the future of NATO? Should it expand in any way?

(Let me interpret this for you: I want to see how much you know, because we all know that you are not a foreign policy whiz like say President Obama.)

DIEHL: And could I ask you about ISIS, speaking of making commitments, because you talked recently about possibly sending 20 or 30,000 troops and—

DIEHL: If they said that, would you go along with that and send the troops?

DIEHL: What about China and the South China Sea. What do you think they’re up to and—

DIEHL: –and what should we do about it?

HIATT: How do you keep it without troops, how do you defend the oil?

TRUMP: You would… You would, well for that– for that, I would circle it. I would defend those areas.

HIATT: So what do you think China’s aims are in the South China Sea?

DIEHL: Could you use trade to cause them to retreat in the South China Sea?

DIEHL: What would you do?

HIATT: So, if they occupied what the Japanese call the Senkaku Islands, is that something the United States…

HIATT: This theory of unpredictability, I want to push a little bit, I mean – there are many people who think that North Korea invaded South Korea precisely because Acheson wasn’t clear that we would defend South Korea. So I’m curious, does ambiguity sometimes have dangers?

LANE: Can I ask you…Just going back to NATO, because…

LANE: As you know, the whole theory of NATO from the beginning  was to keep the United States involved in the long term in Europe to balance, to promote a balance of power in that region so we wouldn’t have a repeat of World War I and World War 2. And it seems to be like what you’re saying is very similar to what President Obama said to Jeffrey Goldberg, in that we have allies that become free riders. So it seems like there’s some convergence with the president there. What concerns me about both is that to some extent it was always thought to be in our interest that we, yes, we would take some of the burden on, yes, even if the net-net was not 100 percent, even steven, with the Germans. So I’d like to hear you say very specifically, you know, with respect to NATO, what is your ask of these other countries? Right, you’ve painted it in very broad terms, but do you have a percent of GDP that they should be spending on defense? Tell me more. Because it’s not that you want to pull the U.S. out.

LANE:  You know, well, they say and I think this is on public record, it’s basically 50 percent of the non-personnel cost is paid by South Korea and Japan.

HIATT: Well I guess the question is, does the United States gain anything by having bases?

HIATT: So you don’t think the US gains from being the force that sort of that helps keep the peace in the Pacific?

HIATT: I’d like to come back to the campaign.

(You can go to the transcript for this exchange and troll for the intellectual content.)

HIATT: Just back to the campaign. You are smart and you went to a good school.

(Thanks Fred, we are now commenting on the IQ of the average voter who could not get into or afford to go to a good school. This reminds me of the Harvard Undergraduate at Columbia who told me that I would not make it because I graduate from the University of Akron.)

RYAN: You [MUFFLED] mentioned a few minutes earlier here that you would knock ISIS. You’ve mentioned it many times. You’ve also mentioned the risk of putting American troop in a danger area. If you could substantially reduce the risk of harm to ground troops, would you use a battlefield nuclear weapon to take out ISIS?

(Muffled is a good description, not transcription error but muffed might be better and what follows is a discussion of Inside the Beltway DC rights issues, I am sure of deep concern to broader America).

To be clear the comments in BOLD are mine.

When has the Post ever asked Candidate Obama such questions? Or Hillary Clinton for that matter?

If you know the “correct” answers, the questions are really tests on whether you are fit to join the Inside the Beltway priesthood.

One does not even have to like Trump to understand the importance of something akin the recovery of real journalism as crucial to the future.

For that I can go to church.

And although the Donald does not walk or talk like a well trained Inside the Beltway guy, when he speaks of putting the trade relationship with China on the table as part of redefining the competition or calls for a new bargain with NATO or questions where and when we use troops and try to have objectives worthy of their efforts, I think we probably need a bit more “bananas” in the conversation.

Credit for priests greeting Vikings is as follows: