When President Obama was dragged into supporting the NATO operation against Gaddafi in Libya, he expressed his frustration and level of support in one brilliant statement.  The United States would “lead from behind.”

Now there could be some MISunderstanding of a concept with behind as a key element of the statement, but the President was getting at an important point:  how could the United States support allies without taking the lead?

But “lead” from behind seems a bit of a stretch.

So we asked Boomer to help us through this linguistic innovation.  Boomer, I simply do not understand how you LEAD from behind?

I understand how you don’t lead or you support or you work with colleagues or friends or whomever.

But help us understand how you lead from behind?

Boomer:  “Unless you have lived Inside the Beltway for a very long time, this would confuse you.  If a President and his Administration does anything by definition they are LEADING.

LEADING means that they have made tough decisions in perilous times and are showing the way for the rest of us mere mortals.”

Ok, I get it now so the President and his Administration and making tough choices and are taking responsibility for their decisions.

Boomer: “Oops, your comment reminds me of what Candidate Reagan said to President Carter: there you go again.  You are confusing the issues.  When you LEAD you do not want to be RESPONSIBLE for what you did. 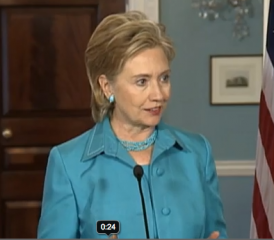 Secretary Clinton Comes Out Decisively for Twitter Use in Iran. Tweets for Freedom.

You hope that the consequences of what you do are forgotten by the time anyone notices.  And the key thing is to SPEAK decisively.

President Teddy Roosevelt once said that you need to speak softly and carry a big stick.

But in today’s social media world, thumbs are more important than force. Tweeting is in; quiet competence is out.

For example, the Arab Spring has come about by the 1% of those in the Arab World on FACEBOOK.  And FACEBOOK is inherently democratic so that the Arab Middle East will become democratic because of the FACEBOOK Arab Spring.”

Are you saying that LEADING from behind is what helped support or accelerate the positive dynamics of the Arab Spring?

Boomer:  “You are starting to get it.  What the LEADER needs to do is to put strong LANGUAGE out there which can be picked up by the Washington Post and the New York Times and reported on.

These folks are called JOURNALISTS which means today or this hour.

And if you get lucky no one will connect the dots.

In fact, most Administrations can’t paint a picture even if you gave them a paint by numbers kit.”