The 2017 US Marine Corps Marathon is over and is now another chapter in the history of a great event.

The Second Line of Defense team would like to congratulate the Marine Corps and all the runners who participated in the 2017 Marine Corps Marathon.

It is a joyous event with an historic course which is run throughout the Nation’s Capital. 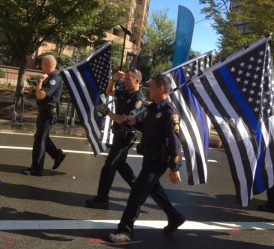 To say that it is a fun run is not to minimize what a significant accomplishment is being made by a runner in the event to forge a life time of memories.

Each year every runner has a great story.

This year, we were struck by a uniformed police contingent walking fast together holding special flags for “Project Remember.”

It was a warm Sunday day in October.

But there were a number of dedicated uniformed Police walking in unity to remember their fallen brethren.

They were joined by many service members and their families, who also ran to honor the sacrifices made by a few for the safety of us all against enemies both foreign and domestic.