Accountability and Heroism: The US Navy Exemplifies Both

The US Navy is unyielding in holding those responsible for mistakes made at sea to very high standards especially when loss of life occurs.

It is a tradition of accountability that must be upheld and America is now reading about decisive action in removing from command those responsible for the collision at sea between USS Fitzgerald DDG- 62 and a 29,000 gross tonnage container ship AEX Crystal

But the Navy also singles out those who have done their duty in a crisis situation.

This tragic event at sea was professionally presented legally as a supplemental “Line of Duty Determination” signed by the Commander of Strike Group Five, and in a time of crisis many responded professionally and with heroism.

The report extensively covers the events of the collision at sea.

It is an important legal document to make sure those sailors injured and those lost are covered by the full weight of the thanks of our Nation.

No repayment can ever totally cover the loss of life, in the line of duty, but families can be aided in their time of grief. Those injured will be taken care of in the service and as appropriate by the Department of Veterans Affairs if they are no longer serving on active duty.

In the event of a collision at sea the US Navy has a code of accountability that is comprehensive and strives to always accurately capture all lessons learned.

The United States Naval Academy has and will continue to produce many Naval Officers afloat in war and peace, who chose to “Go Down to the Sea in Ships” in keeping us all safe in our homes.

So the word goes out to graduates on what happened.

Adm. Bill Moran, the deputy chief of naval operations, said that Vice Adm. Joseph Aucoin, head of the Navy’s 7th Fleet, plans to relieve Cmdr. Bryce Benson for cause. On Thursday, the Navy released a preliminary report on the June 17 collision between the Fitzgerald and the freighter ACX Crystal off the coast of Japan.

About a dozen sailors in all face some punishment, including all of the destroyer’s watch. Further sanctions are possible, Moran said.

Aucoin acted swiftly because the investigation indicated serious mistakes were made by the crew, Moran said.  The Navy has lost confidence in the sailors being relieved.

Collisions should never happen, Moran said. “We got it wrong.”

Dr.Steve Hudock, Secretary of our USNA Class of 1969 foundation forward the Line of Duty document to our classmate and his poignant words capture the professionalism of service as a Naval Officer afloat:

“How many times were we steaming at night, darkened ship during our cruises?? (or practicing night EMCON recovery?)

Our Class motto is “Not Self” and we are certainly not unique in that tradition among all classes.

A very important lesson is drilled into graduating USNA Midshipman as they are about to enter the Fleet—always think and act:

The great quote about the attack on DDG-67 USS Cole:

“The ship saved the crew the crew saved the ship-An Arleigh Burke Class DDG is a formidable ship.”

The  Damage Control Response of the crew of USS Fitzgerald DDG- 62, is a noteworthy remember of “Ship-Shipmate-Self.”

At the time after the collision the CO was trapped in his cabin but the Officers and crew responded:

“At the time of collision the DCA (Damage Control Officer) was asleep in her rack. She woke up when she felt the ship lurch. The collision alarm then sounded and the DCA quickly dressed and proceeded to the CCS (Central Control Station.) From their she directed DC efforts, sounded GC (General Quarters) alarm using general shipboard announcent system, and set primary and secondary boundaries(a first and second line of defense to control the spread of the flooding.)”

While the ships officers and crew were successfully saving the ship, including rescuing the Captain who was “hanging from the side of the ship,” the individual selfless courage of two sailors was noted in the report:

“Two Sailors chose to remain at the bottom of the ladder on the port side of the compartment, and then on top of the hatch after they egressesed, in order to help others out of the spaces even as the water was rising and began flooding into the space around them. The choices made by these two Sailors likely saved the lives of a least two of their shipmates.”

In memoriam to those lost so America always stays safe. 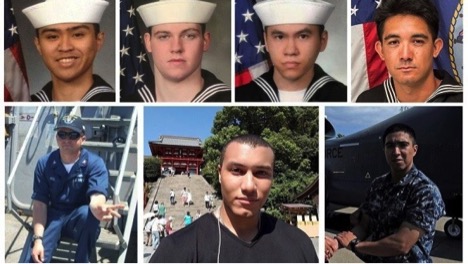 The crash created a large gash on the side of the destroyer, which flooded the berths of 116 sailors. When the ship was returned to a U.S. base in Yokosuka, divers recovered the bodies of seven sailors.