The Washington Post has from the outset positioned itself as a virulent critic of Donald Trump.

I wrote a piece after their amazing “interview” of Trump last March.

I highlighted the pathetic questions which the editorial board asked, and noted that there seemed to be little hope that they would play a watchdog function as the motif was to be attack dogs trying to ensure the victory of Hillary Rodham Clinton.

I concluded the following:

One does not even have to like Trump to understand the importance of something akin the recovery of real journalism as crucial to the future.

For that I can go to church.

And although the Donald does not walk or talk like a well trained Inside the Beltway guy, when he speaks of putting the trade relationship with China on the table as part of redefining the competition or calls for a new bargain with NATO or questions where and when we use troops and try to have objectives worthy of their efforts, I think we probably need a bit more “bananas” in the conversation.

And to remind you, the owner of The Washington Post blogist/newspaper: Jeff Bezos who can be seen in the following photo of a meeting with Donald Trump on December 14, 2016. 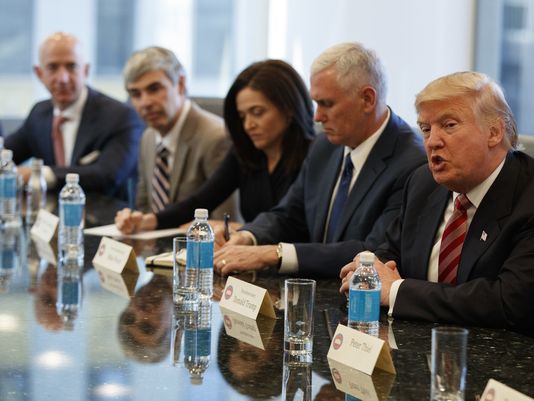 It is probably a good idea to save his space business from the new regulator-in-chief.

Apparently to deal with the new challenges, the Post has decided that the Captain Obvious route might make sense.

The first is the “discovery” that the Washington Think Tanks, who are hardly that, are being marginalized.

For decades, Washington think tanks have been holding pens for senior government officials waiting for their next appointments and avenues of influence for sponsors of their research. Donald Trump’s incoming administration is bent on breaking that model.

Trump’s appointments have so far have been heavy on business executives and former military leaders. Transition sources tell me the next series of nominations — deputy-level officials at top agencies — will also largely come from business rather than the think tank or policy communities. 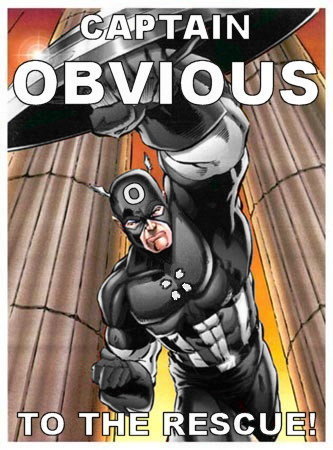 For example, neither the American Enterprise Institute’s John Bolton nor the Council on Foreign Relations’ Richard Haass is likely to be chosen for deputy secretary of state, while hedge fund manager David McCormick is on the shortlist. Philip Bilden, a private equity investment firm executive with no government experience, is expected to be named secretary of the Navy.

An even better question could be what will happen to the funding of Think Tanks if they can not deliver the access that gives their sponsor’s the outcome which they might want?

Of course, new funding could come into the marketplace to span a very different kind of approach – proactive reshaping and generation of alternative ideas to the endless continuation of the past answers in new forms.

The second example is even more amazing – critics of Trump who signed petitions against his elections are not being considered for key jobs.

Perhaps a comment from the Godfather could remind folks that elections have consequences.

They are some of the biggest names in the Republican national security firmament, veterans of past GOP administrations who say, if called upon by President-elect Donald Trump, they stand ready to serve their country again.

But their phones aren’t ringing. Their entreaties to Trump Tower in New York have mostly gone unanswered. In Trump world, these establishment all-stars say they are “PNG” — personae non gratae.

Their transgression was signing one or both of two public “Never Trump” letters during the campaign, declaring they would not vote for Trump and calling his candidacy a danger to the nation.

As shocking as this might be to the folks who signed these letters, it is blindingly obvious to the rest of us. And suggests just how insightful these folks are about anything at all.

It would be useful to have a well designed and well executed watchdog function from the press for this or any Administration.

But playing the role of compliant supporter of the political opposition or Captain Obvious is not going to cut it.