Lost Inside the Beltway: “Can We Work for President Trump?”

Danny Lam, an acute Canadian observer, has hammered home the point, that the American people have spoken.

I find it incredulous for so called “establishment” figures in Democracies to attempt to immediately overturn or undermine the results of plebiscites like BREXIT, Scottish Independence, Quebec Secession, or the election of Donald Trump, etc. just because they didn’t like the outcome.

And why I have no patience with those who blame the ignorance of the people for their “bad” choices.

When the people are given that rare occasion to choose, their choice must be respected by all parts of a civilized regime.

Americans on November 8th lawfully and fairly came to a decision that is accepted by all Americans.

The alternative is too frightful to consider.

President elect Trump and his team have been given a mandate by the American people.

The future is now and a new page in American political history is being turned.

But back Inside the Beltway, panic and obstruction loom large.

Just to spin through the current lead web page of Politico highlights the amazing resistance to change.

Here are some of the leads:

“Five Takeaways from an Unthinkable Night”

“Democrats Move Through Stages of Grief on Trump”

Got National Security Elites Agonize: Should I Work for Trump?”

As Ed Timperlake noted in an article published on March 19. 2016:

The Trump campaign has clearly shaken up America.

And he is doing so without following the normal trajectory of campaigning and shaping a campaign staff.

He has made it clear that if elected he would appoint senior personnel along the Reagan model of appointing senior leaders who would report and lead, and is not building a huge team of Republican “advisors” who are really simply positioning for jobs.

He also made it clear that he is not an admirer of the Iraq invasion, and by inference, those advisors who shaped that effort.

“Obviously, the war in Iraq was a big, fat mistake,” Trump said. “George Bush made a mistake. We can make mistakes. But that one was a beauty. We should have never been in Iraq. We have destabilized the Middle East.”

What would you do if you were a Republican advisor, notably a neo-con who shaped this unfortunate outcome, and saw this?

How about organizing a cabal of your fellow experts and attack the man who made the statement.

In part, it is clear that he will hold accountable not only the Barrack Obama team for their performance, but raise questions about the performance of policies prior to the coming to power of Obama.

Put bluntly, Trump sees a fundamental need to rethink American policy and is not cozy with the bipartisan think tank cabal Inside the Beltway.

Eliot Cohen Professor of Strategic Studies at Johns Hopkins SAIS recently collected a list of the Great and Good to stop Trump.

All who signed up with Professor Cohen can speak for themselves on what they plan to do if Donald Trump is the Republican Candidate going up against Hillary Rodham Clinton in the 100 day sprint to Election Day.

Of course many might consider keeping private counsel on their voting preference since odds are she will be indicated.

A fellow Vietnam Vet who was an MIT educated Army Officer once told me: “Don’t hitch your wagon to a turkey” and their secret ballot is a great choice in America.

Unfortunately for him, Professor Cohen has already made his choice known in a very public way.

Bryan, I will oppose Trump as nominee. Won’t support & won’t work for him for more reasons than a Tweet can bear.

Eliot A Cohen added, (Twitter message to Bryan..–redacted out of politeness)

Setting aside the huge ego of telling Donald Trump that he will suffer if Eliot Cohen will not work for him, the more important question is why would Trump want him?

But the mere fact that the American voters have clearly called for change, such direction from the electorate is of no real consequence for several of our policy “elites.”

AFTER the election, what do we learn from a Politico article by Michael Crowley?

Against this tableau of crisis, Republican foreign policy elites who consider Trump repellent and unqualified will continue a debate begun in a whisper during the campaign–about whether and how they might mitigate his most dangerous impulses…..

Foreign policy veterans may be in especially high demand at the State Department, where career foreign service officers have talked for months about whether they could serve under a President Donald Trump—a debate many considered academic but which now presents them with a grueling choice between their values and their country.

The prospect of mass resignations “is a real thing,” according to one career diplomat who has had several such conversations with State Department colleagues.

Eliot Cohen, an influential Republican who served as counsellor to Secretary of State Condoleezza Rice, and who vehemently opposed Trump, urged longtime diplomatic and national security professionals not to quit in disgust.

“Career people, I think, have an obligation to serve faithfully, and not least to ensure that the principles and letter of our Constitutional system of government are respected,” Cohen said.

Even more amazing are these comments in an article Nahal Toosi on Politico:

One challenge for Trump is that he appears to have challenged mainstream Republican thought on a host of issues, especially trade, which might make it harder for him to find good candidates. Carlos Gutierrez, who served as secretary of commerce under Bush, said Republicans should not stop from calling out Trump on positions they deem wrong.

“We’re just talking now about how odd it is for a Republican president to be against” the Trans-Pacific Partnership, a massive trade deal, Gutierrez said. “We’re all in a state of shock. But our role now is to wish him well and to try to help him.”

Rep. Duncan Hunter (R-Calif.), one of Trump’s earliest congressional endorsers, said he’d be interested in serving in a Trump administration if asked. The Marine combat veteran also predicted those who refused to endorse Trump would be left out.

“I don’t think they’re going to be brought on board, even if they wanted to be,” Hunter said. “I think that Donald trump remembers who supported him and who didn’t.”

The fallout from Trump’s election is obviously reverberating well beyond Republicans. Democrats who had been hoping for political appointments in a Clinton administration are reeling from her loss and resetting their plans. Many in the civil service, too, are wondering whether they want to stay and work in a Trump administration.

Oh my God! The voters have elected a man who will not give me a job and he clearly needs to learn from the High Priests inside the Beltway or he will clearly fail.

Or will he set in motion a process of seeking answers to questions which are crucial to the survival and prosperity of the Republic. That never seems to be considered by know everything Inside the Beltway policy elite. 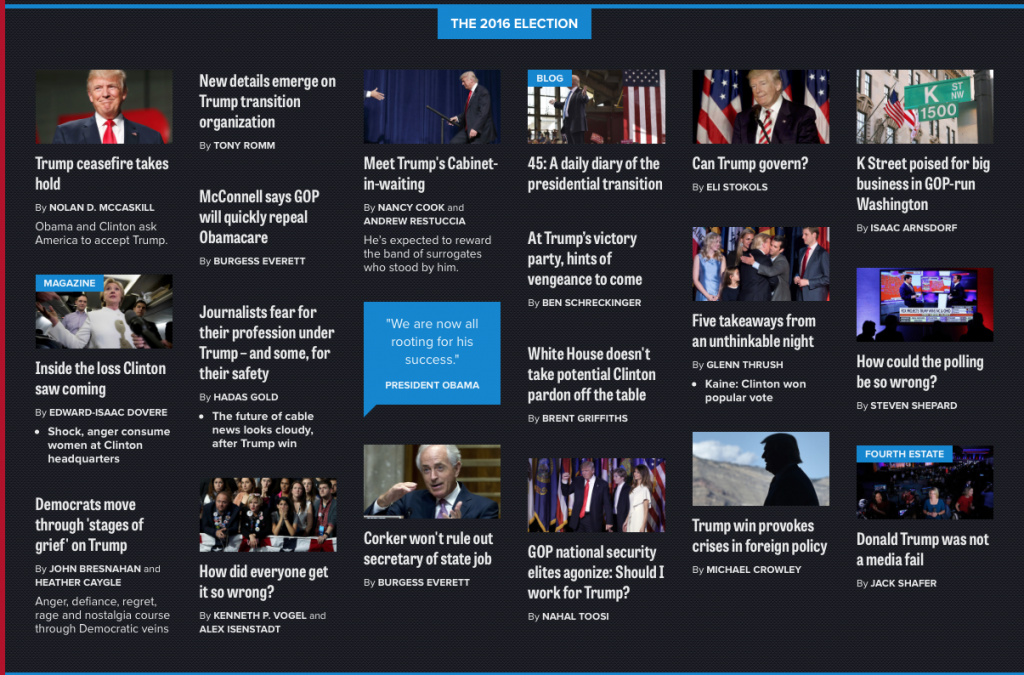