Is Senator Clinton “Fit” For Duty?

Going into the final run of the 2016 Presidential Election, Senator Tim Kaine, D-VA speaking at a Labor Day Event in Pennsylvania, invited all to “come with me to the Shipyard at Newport News.”

Expressing pride in the workforce of a world class yard that has built many historic fighting ships of the US Navy is a powerful message. So let me help out VP candidate Senator Kaine.

While he was growing up in Overland Park, Kansas the Newport News Shipbuilding and Dry Dock company was building the ballistic missile submarine the USS Henry Clay (SSBN- 625 ) in fact here is a picture of my father saluting as one of the “Plank Owners”: 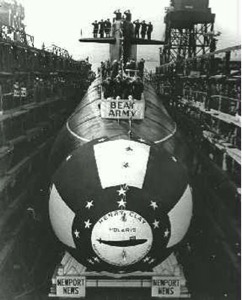 The point is the Navy “Polaris” fleet along with the famous USAF Strategic Air Command (SAC) stood silent vigil at all times as the US strategic strike deterrence force enabling the United States Military to win the Cold War.

I graduated from Ferguson HS named for Homer Ferguson, first in his USNA Class in 1892 (he was 15 when he entered) who after studying Naval Architecture at Glasgow University eventually became the President of Newport News Shipbuilding & Dry Dock Company in Newport News, Virginia from July 22, 1915 through July 31, 1946.

My Ferguson ’64 “Mariner” football team mates were of all political stripes some went to college, others into the military for the build up into Vietnam and others into the Apprentice School in the ship yard. So thank you Senator Kaine for putting a spotlight on a most important issue the deterrence forces of the U.S. and their Commander in Chief.

One of the ugliest political tricks used in the heat of a contest was in the LBI-Goldwater election contest. The issue of unstable mental health was thrown against Barry Goldwater. In fact, because of the episode an entire profession of responsible mental health professionals the American Psychiatric Association said never again:

“… It is unethical for a psychiatrist to offer a professional opinion unless he or she has conducted an examination and has been granted proper authorization for such a statement.”

The only choice of “Clinton Inc” is always that “we must win” which was expressed in 1996 after illegal foreign moneys were being reported being accepted by Clinton/Gore ’96; it was true then and true now.

So when David Plouffe makes a medical charge against Donald Trump with his long time coming University of Delaware degree, (a good school) one notices he is absent any Medical Degree. The political trick is simple get an ugly word in play and make your opponent deny it. Well it did not work with most of the media and also with the inherent fairness of the American public and that was that.

However, Hillary Clinton by her own words and deeds personally put into an FBI Criminal Investigation incontrovertible facts that she had a medical event and was still suffering from a non-penetrating Traumatic Brain Injury.

Here is where her ill-health becomes a very serious problem for her quest to be President and Commander-in-Chief.

All in the military and fellow civilians who have been awarded a Security Clearance, which is a privilege and not a right, would have their clearance revoked if they had done what Secretary Clinton had done. This has been successfully pointed out and for the most part already factored into the campaign.

The other dimension of her self-documented ill-health should have a profound impact on her supporters who served as senior officers in the US Military.

Her “fitness” for duty is a dynamic question and needs to be addressed.

American’s are an understanding and accepting people so the age and health of their candidates is an issue until appropriately addressed and resolved. One does not expect a 68, soon to be 69 woman to be the same person she was in her earlier days, and with Donald Trump her opponent at age 70 the issue of age is a wash as it should be. The issue of Secretary Clinton’s medical problems with her memory and judgment is an issue.

So when the just releasews FBI report talks about SAP briefings it is very serious because the most closely guarded Code Word TS/SCI program in the United State is our COG plans and procedures in the event of a strategic strike to decapitate our leadership. The goal of a strategic enemy is to interfere with the launch codes for today’s equivalent of the USS Henry Clay.

The fundamental essence of deterrence for our national survival, since the introduction of Atomic Weapons, is the absolute certainty a constitutionally empowered leader would survive a first strike and retaliate with a vengeance. As long as any opponent of America believes that then we have an element of safety and national security that deters the “unthinkable.”

This is why a single line in the FBI report in the interview of Secretary Clinton should be of the greatest concern.

COG/SAPs are ongoing and dynamic and understanding them and ones role at all times is essential. So this line in the FBI release tells all American’s that Hillary Rodham Clinton is not qualified to become President.

“Recalled briefings but could not recall any specific briefings on how to handle information associated with SAPs.”

Since the dawn of the Atomic Weapons, except for all life ending bio weapons, a strategic strike is the only event that can destroy us as a Nation. Thankfully, our silent sentry’s under the sea, in missile silos and in our strategic bomber force have done and will continue to do their duty with the trust and honor they all deserve.

Let me know turn to the question of the operation of our conventional forces and the role of the President and Commander-In-Chief, because, two honorable men gave major speeches at the Democrat National Convention which touched on the subject of Senator Clinton and her readiness to serve as Commander-in-Chief.

“Every American in uniform, in the White House or at home – USA! USA! USA! – we must be a force for unity in America, for a vision that includes all of us. All of us. Every man and woman, every race, every ethnicity, every faith and creed, including the Americans who are our precious Muslims. And every gender and every gender orientation.

My fellow Americans, I tell you without any hesitation or reservation that Hillary Clinton will be exactly – exactly – the kind of commander-in-chief America needs.

I know this because I served with her.”

A simple question for General Allen, after reading what the FBI just released in their Criminal Investigation of Secretary Clinton, would Company Commander Captain Allen USMC allow a Platoon Commander to continue to lead Marines, or would Lt.Col. Allen a Battalion Commander allow a USMC Captain, with her health and veracity issues to command a Company of Marines into combat?

Insights in support of Hillary Rodham Clinton to be President from Rear Admiral John Hutson USN (ret) Former Judge Advocate General of U S Navy were presented as well at the Convention.

“Anyone who’s served with the young men and women of our armed forces knows how serious it is to send them into harm’s way. When you’re a soldier, sailor, airman, or marine, you don’t get to choose your commanders. But when you’re a citizen – you have the responsibility to choose the Commander-in-Chief who will keep us safe, strong, and secure. Choose Hillary.”

Admiral Huston, setting aside that in her earlier years Hillary Clinton, Yale Law, both failed the DC Bar and was dismissed from a the Democrat Staff of a Congressional Committee for unethical behavior, would you now, having further insights into her health and character, assign her to be a Counsel in a Military Court?

Asking the above questions are fair and letting the General and Admiral speak for themselves is also fair.

But I can also speak to the issue of what the FBI released and its meaning if it happened to an ordinary military officer. 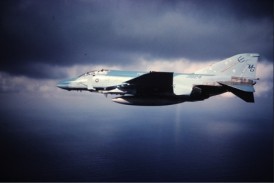 As CO of VMFA-321 a Marine Fighter Squadron all my squadron mates would expect a Marine aircrew member exhibiting Secretary Clinton’s adverts health manifestations to be immediately grounded, and sent to our “Fighter Doc” to be medically processed out of uniform and sent to the VA for much needed medical help, attention and rehabilitation. It was a sacred trust serving as an Officer in the US military.

I can answer that in my case, understanding Hillary Clinton is not running for the mythical Top Gun Trophy, but the fundament question is both fair and important. She is unqualified to be a member of the US Military, not because of age which is self-evident, but because of her serious injury. Rather then employ the LBJ/Plouffe slimy gambit it is sufficient to present the following hard apolitical evidence and let the readers judge for themselves:

What is a Traumatic Brain Injury (TBI)?

A TBI occurs when physical, external forces impact the brain either from a penetrating object or a bump, blow, or jolt to the head. Not all blows or jolts to the head result in a TBI. For the ones that do, TBIs can range from mild (a brief change in mental status or consciousness) to severe (an extended period of unconsciousness or amnesia after the injury). There are two broad types of head injuries: penetrating and non-penetrating.

Other common symptoms that should be monitored include:

Reporting these facts in her own words to the FBI is as far as any writer should medically go, wither for or against Secretary Clinton.

Below is the list of things Clinton could not recall in the FBI interview:

2 responses to “Is Senator Clinton “Fit” For Duty?”