President Reagan would be very proud of Donald Trump’s approach to helping Veterans.

It is reminiscent of Candidate and then President Reagan’s actions. 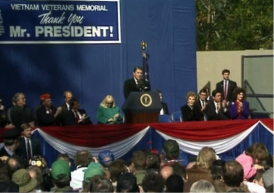 President Reagan changed the national debate by saying that those who served fought in a noble cause.

To a generation of Vet’s Reagan’s words rang out.

Ronald Reagan’s wish to neutralize the “problem” of the Vietnam veteran as outsiders was evident in his speeches praising Vietnam veterans’ faithfulness, applauding other Americans for welcoming them home, and observing that America had consequently transcended “the tragedies of the past” and come together “in unity and with resolve.”

The Reagan administration’s wish to do away with negative stereotypes of Vietnam veterans was also evident in the activities of a little-remarked federal organization, the Vietnam Veterans Leadership Program (VVLP).

“The decades of decay, division and decline will come to an end. The years of American Greatness will return.” Donald Trump

No accountability no check:

(1) Mr. Trump will appoint a VA Secretary whose sole purpose will be to serve veterans. The Obama Administration has continually placed D.C. bureaucrats’ needs above those of veterans, this will not happen under a Trump Administration.

(2) Mr. Trump will use the powers of the presidency to remove and discipline the federal employees and managers who have violated the public’s trust and failed to carry out the duties on behalf of our veterans.

(3) Mr. Trump will ask that Congress pass legislation that empowers the Secretary of the VA to discipline or terminate any employee who has jeopardized the health, safety or well-being of a veteran.

(4) Mr. Trump will create a commission to investigate all the fraud, cover-ups, and wrong-doing that has taken place in the VA, and present these findings to Congress for to spur legislative reform.

(5) Mr. Trump will protect and promote honest employees at the VA who highlight wrongdoing, and he will guarantee their jobs will be protected.

(6) Mr. Trump will create a private White House hotline, which will be active 24 hours a day answered by a real person. It will be devoted to answering veteran’s complaints of wrongdoing at the VA and ensure no complaints fall through the cracks.

(7) Mr. Trump will stop giving bonuses to any VA employees who are wasting money, and start rewarding employees who seek to improve the VA’s service, cut waste, and save lives.

(8) Mr. Trump will reform the visa system to ensure veterans are at the front of the line for health services, not the back.

(10) Mr. Trump will ensure that every veteran has the choice to seek care at the VA or at a private service provider of their own choice. Under a Trump Administration, no veteran will die waiting for service. These days are over starting January 2017.

2 responses to “Trump and Veterans: Recalling the Reagan Legacy”