Stop the Noise: Awaiting the Israeli Prime Minister’s Speech to the US Congress

The Speaker of the U.S. House of Representatives, John Boehner, has invited Prime Minister Benjamin Netanyahu of Israel to speak before a Joint Session of Congress.

This invitation came on the heels of President Obama’s State of the Union speech in which he threatened to veto any legislation sanctioning Iran.

Many argue that the failure to inform the White House prior to issuing the invitation is a serious breach of protocol and that the speech should be shelved.

However, The Washington Post has done a very good job in bringing clarity to the process of the initial invitation, and made reference to a correction for the record in the original New York Times reporting on the issue of how the invitation was reported.

An earlier version of this article misstated when Prime Minister Benjamin Netanyahu of Israel accepted Speaker John A. Boehner’s invitation to address Congress.

He accepted after the administration had been informed of the invitation, not before.

It is no secret that President Obama is not a fan of Bibi Netanyahu, nor a staunch supporter of the state of Israel. 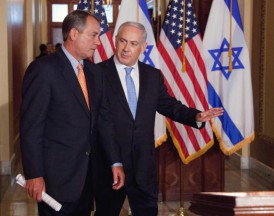 The Speaker of the House and the Israeli Prime Minister. Credit Photo: US News and World Report

So why do some American Jewish leaders feel it their duty to oppose the speech?

The Democrat constituencies who voted for Obama, twice, seem unwilling to believe that President Obama is not the supporter of Israel they hoped he would be. American Jews should applaud Speaker Boehner for enabling the Israeli Prime Minister to articulate to the American people, as only he can, the threat all democracies face.  Put politics to the side, the threat of Iran getting a nuclear device is very real.

A core principle of Jewish learning is an emphasis on questioning and dialogue.

Discussing and arguing is in the Jewish DNA.

It is an important way that knowledge is acquired.  At this moment in history, with Jews facing growing anti-Semitism worldwide, and mounting Islamic terrorism, now would be a good time just to stop arguing and give everyone the chance to listen to the Israeli Prime Minister.

If the Israeli electorate wishes to debate internally that is another matter.

The Israeli Prime Minister has been offered a powerful podium to make his case about the gathering danger, not just for Israel, but the Middle East, Europe and America.

The threat from Iran is that serious.

Unfortunately, the Obama White House attacked all involved in the invitation, and some interest groups are leveraging the issue to their own political and fundraising advantage. Criticism of Israel by Obama supporters is spilling over to the wider American electorate, the last thing that Israel needs.

Surely American Jews should not feel they must choose between supporting our President versus supporting Israel as some are trying to parse the issue.

Moreover, President Obama does not need to have his honor defended; the record shows he is not now the insulted party.  In fact his Administration has used this as an opportunity to make very nasty personal attacks against the elected leader of a free country. Any fissure among Jews is likely a source of great delight for him and his political operatives, especially, members of the Congressional Black Caucus, some of whom are piling on against the speech as if it is a personal affront to the President.

The hullaballoo over protocol distracts from the serious concerns about a threatening situation in the Middle East.

Creating a rift in the Jewish community with the leader of the only democracy in the Middle East is a gift to Israel’s enemies, who are the very same enemies of the United States. As the only democratic bulwark in a very dangerous neighborhood, Israel’s security corresponds to our own.

Not only should the Israeli Prime Minister speak, he should have the support of the American Jewish Community.

So it is way past time to stop the bickering and focus on what he has to say to Congress and the American people.