The attention to detail by Director Clint Eastwood is a key point in the movie. The actors perfectly capture the dark, as well as the comradery of good spirited verbal interactions among the troops in their stressful combat environment.

The move works on a very basic level of art –it shows and doesn’t tells.

It’s worldwide success also shows that even those who haven’t experienced combat or foreign military service in a War Zone will see it and take a kinder and more appreciative look at the Americans who have.

The true face of the Iraq war is seen in the brutal use of children, women and even old ladies as shields in combat.

Sadly for the American military this is nothing new.

The history of the Vietnam War shows American troops facing the same moral dilemmas of similar combat practices. “Uncle Ho” (Ho Chi Min) NVA supreme leader and NVA commander General Jiap encouraged the same tactics in their total war approach. As the movie shows such combat in Iraq captures the same stress in protecting innocents while killing a vicious enemy that the fathers and grandfathers of some of today’s warriors experienced in Vietnam 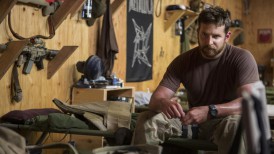 The back-story in the movie of the impact and relationship with Chris Kyle, the American Sniper” with his wife and children. That part of the movie was handled honestly and with tremendous respect for both the warriors and their families who are asked to sacrifice so much.

However, many reviewers were critical of the movie and Eastwood because the main character, Chris Kyle did not fit their desired stereotype.

He wasn’t portrayed as red neck, drunk, Christian zealot or remorseful emotionally paralyzed victim and his wife as a bar room hussy.

One review reflects this viewpoint:

“If only the rest of the film were as strong and troubling as that bar scene. “

The climactic showdown between these two leads to Eastwood’s most shameless techniques — clichéd slow motion just when you expect it, an audience-baiting “kill” shot”…”

But what Eastwood also captures is the fact that Chris Kyle didn’t just function as a Sniper he lead in door to door clearing missions, urban combat sweeps.

This type of combat is universally acknowledged by infantry warriors as one of the most dangerous missions they can have on today’s battlefield.

Up-close and personal engagements in urban environments are stressful and very deadly.

For those who want to trivialize that, try going into building or apartment where a highly armed and fanatical murderer or rapist is lurking and compute your chances of escape and survival.

In launching an attack on the movie some try to denigrate Chris because of a very murky barroom engagement between Kyle and Jesse Ventura.

Even if true it could easily add up to a PTSD event. And of course that has nothing to do with his documented combat service and valor.

The movie stands the test of combat accuracy in principle.

Reviewer Phillips and Filmmaker Michael Moore, who said snipers are cowards, have once again demonstrated that they are propagandists who will personally denigrate anyone they disagree with.

Some critics are even making disparaging comments about his widowed wife as they hide behind their smartphone tweets and computer keyboards.

Most critics certainly have no record in combat yet they are quoted widely as experts on what it means to be a sniper.

Any review of a movie about Chris Kyle brings us to Jesse Ventura, who successfully sued Chris Kyle, and then his estate for defamation in a barroom incident that does not need repeating.

“Jesse Ventura” was born James George Janos and served honorably in the US Navy. He was discharged as a Petty Officer Third Class (– equal to an Army Corporal, E-4)—after six years.

Yet a Wikipedia post show that he never was decorated for Valor or even Meritorious Service –and in fact never served in Combat.

“In January 2002, Ventura, who never specifically stated whether he fought in Vietnam, disclosed that he had not seen combat.

He was stationed at Subic Bay in the Philippines.

Those teams were incorporated into the SEALS in 1983—and then only after additional SEAL Training.

Critics have used the Ventura incident to attack the legacy of the American Sniper Chris Kyle while it has nothing to do with Chris’s documented war record.

In fact as a fellow veteran I find “Ventura” pursuing Chris Kyle’s widow for damages in a civil case rather disgusting and for a fellow vet to zealously financially attack a combat decorated widow and children it is actually reprehensible.

Especially since the family now has to live through the trial of the man who killed their husband and father.

But with the movie making a very significant amounts of money, both in the US and worldwide, individuals are voting with their pocketbook that a great move has been made.

In spite of petty detractors that says it all.