Military Intervention to Deal with the Ebola Contagion: Cautionary Lessons From Agent Orange to Chemical Weapons in Iraq

American combat veterans, from fighting an enemy or a disease, should always be concerned about a grateful nation not protecting them.

A generation of Vietnam Veterans were ignored and allowed to die alone waiting in the dark during their end of life years.

So active duty military and their families have every right to be concerned when the Government finds a new mission for them involving new risks.

With respect to putting the US Government front and center in helping the troops who were exposed to Agent Orange and environmental factors causing Gulf War illness one visionary DVA Secretary said not on his watch.

On May 11, 1989 DVA Secretary Derwinski held a news conference and sided with America’s Veterans; he stopped the US Government legal case that was denying disability compensation to Vietnam in-theater veterans based on exposure to Agent Orange (AO). The Vietnam Veterans of America (VVA) were very appropriately aggressive in support of USG taking full responsibility to address the adverse health effects of Agent Orange.

Consequently, prior to his action there was little to no motivation for Vietnam Veterans to apply for disability compensation based on exposure to Agent Orange because the VA rejected AO service-connected disability requests.  Also, many in those days had justified distaste for the government.

The Washington Post in Secretary Derwinski’s obituary acknowledged his vision and leadership.

Siding with the veterans, Mr. Derwinski reversed the government’s position and authorized payments to some veterans who had suffered from a rare form of cancer linked to Agent Orange.

Secretary Derwinski corrected an historic violation of the social contract between those who protect us and all other citizens.

Now, for younger veterans, tragically, the environmental effects of the battlefield are now being seen.

Starting with Desert Storm veterans and continuing for those serving in our current wars, the Government has learned from AO.

This time the VA has created an early registry motivated by Secretary Derwinski. The American Legion was very aggressive in leading the effort to create a Gulf War registry.

I noted in an article written in 2009, that the Iraq War introduced problems of its own.

For our next generation of veterans, one cause of the growing problem of “Gulf War Illness” is exposure to Iraq chemical munitions inside bunkers that were blown up in Desert Storm.

Even today, some residual chemical munitions (yes, WMDs) have been found.

Unfortunately, the impact of chemical weapons in Iraq followed a similar pattern to AO: the US Government and Military again reverted true to form in covering up deadly agents on the battlefield. It took five more years for the New York Times to break the story:

The American government withheld word about its discoveries even from troops it sent into harm’s way and from military doctors. The government’s secrecy, victims and participants said, prevented troops in some of the war’s most dangerous jobs from receiving proper medical care and official recognition of their wounds.

Jarrod L. Taylor, a former Army sergeant on hand for the destruction of mustard shells that burned two soldiers in his infantry company, joked of “wounds that never happened” from “that stuff that didn’t exist.” The public, he said, was misled for a decade. “I love it when I hear, ‘Oh there weren’t any chemical weapons in Iraq,’ ” he said. “There were plenty.”

There was one senior political appointee in the Bush Administration who did try and bring “sunlight” on Chemical Munitions in Iraq.

In 2004, Dr John “Jack” Shaw Deputy  Under Secretary Defense for International Technology Security/OSD focused on Chemical munitions in Iraq, and he was fired.

Documents shown to U.S. officials in 2004 revealed that among the weapons removed by the Russians were chemical agents used in making poison gas.

Mr. Shaw was removed from his position shortly after going public with the disclosures.

The Defense Intelligence Agency dismissed the claims of covert Russian-Iraqi weapons transfers to Syria and Lebanon as Israeli propaganda, officials said at the time.

Consequently, for another decade troops were being exposed to chemical munitions and the Department of Defense covered it up.

Now the President, as Commander-in-Chief has ordered US military into one of the most dangerous Ebola hot zones in the world.

To be fair to President Obama he gave the order with full transparency, and has had some very public Congressional support.

But it is a good idea to “trust but verify” when dealing with exposing troops to new risks.

Learning from the ugliness of Agent Orange and Chemical Munitions in Iraq it is very important to ask some very hard questions up front.

And checking official US Government publications on Ebola can provide significant insight into exactly how much a risk Ebola is to our troops.

The entry for Ebola designates it as a Bio Safety Level (BSL) 4 agent. 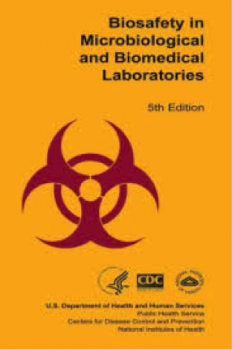 The definition of what “Bio Safety Level 4 Agent” is:

Biosafety Level 4 is required for work with dangerous and exotic agents that pose a high individual risk of aerosol-transmitted laboratory infections and life-threatening disease that is frequently fatal, for which there are no vaccines or treatments, or a related, agent with unknown risk of transmission.

For a counterpoint, here’s the CDC’s press release: “Ebola is not spread through the air or by water, or in general, by food.”

In essence the press release highlights it that :

Airborne transmission of Ebola virus has been hypothesized but not demonstrated in humans.

The select agent program requires adherence to the BMBL for any entity registered with the CDC Division of Select Agents and Toxins.

The protective regulations covers industry, although diagnostic clinics may be exempt.  Note that it says “should consider” the BMBL.  There is some flexibility in implementation, but significant variance from the BMBL can get a lab put on a “Performance Improvement Plan” or have their registration suspended or revoked.

(a) An individual or entity required to register under this part must develop and implement a written biosafety plan that is commensurate with the risk of the select agent or toxin, given its intended use. The biosafety plan must contain sufficient information and documentation to describe the biosafety and containment procedures for the select agent or toxin, including any animals (including arthropods) or plants intentionally or accidentally exposed to or infected with a select agent.

(b) The biosafety and containment procedures must be sufficient to contain the select agent or toxin (e.g., physical structure and features of the entity, and operational and procedural safeguards).

(c) In developing a biosafety plan, an individual or entity should consider:

(1) The CDC/NIH publication, “Biosafety in Microbiological and Biomedical Laboratories.” This document is available on the National Select Agent Registry Web site at http://www.selectagents.gov.

(2) The Occupational Safety and Health Administration (OSHA) regulations in 29 CFR parts 1910.1200 and 1910.1450. This document is available on the National Select Agent Registry Web site at http://www.selectagents.gov

Remembering the Agent Orange and currently breaking Chemical Munition health debacle the military is preparing for engaging against Ebola.

However, currently it doesn’t sound very good, realizing that the adverse health effects of Ebola can move at light speed compared to toxin exposure in previous wars.

As the U.S. military rushes to combat Ebola in West Africa, soldiers are receiving on-the-fly instructions on how to protect themselves against the deadly virus.

So a key question–Where is the Military published Ebola “Bio-Safety Program?”

And if the US Army can spend $52 Billion on building 22,000 MRAPS mostly abandoned and rusting off shore where are the protective suits for all troops actually having even a remote possibility of being exposed.

This is what Industry wears to deal with Ebola:

They call these space suit labs, in part because Dover makes both space suits for NASA and protective suits for maximum-security bio facilities.

Any pundits, reporters and Pols in favor of engaging Ebola in Africa relying on what is being reported about protecting the troops should have no problem being embedded with the front line troops-or would they?

How does the Army medical protocol bible get rewritten to support an insertion of troops into an Ebola contagion zone?

Clearly, the US Army  “protocol’s” should be compared with other USG procedures, guidance and protocols  to see Army comportment  with other written guidance along with actual employed training, practice and actions in Africa.

In addition, a publicly available inventory of gear available with the troops going into Ebola infested territory should be made known and any difference between  level 4 pathogen treatment research and exposure gear and battlefield Chem/Bio gear be presented.

Essentially do the troops have enough of what is best for their protection and how are all being trained?

If National Guard Units are called up Governors are also responsible for safe pattern and practices to protect their troops.

Let’s get this right and not make Ebola the third strike after AO and chemical weapons in violating the sacred trust of protecting those who has borne the battle to his widow and orphans.