By The Honorable Ed Timperlake

When a world class University has one of their Schools lose its moral compass it is a tragedy for a generation.

One of the greatest gifts and opportunities of my life was being accepted at Cornell University for their MBA program. Having been in uniform since 1965, until 1975 first at the US Naval Academy then as a Marine Officer I saw firsthand the ugly and very personal generational rift over the Vietnam War. A country did allow and encourage blaming the warriors for the war and at times it was personal and vicious. So I did not know what to expect entering Cornell in the summer of 1975.

What I encountered every day at Cornell was a wonderful experience, I found a place where all were accepting and focused on acquiring knowledge. All I came into contact with at Cornell respected my military service and Cornell University to this day is very supportive of US Military Veterans. During my years in Ithaca, the Professors and my fellow classmates were first class individuals and Cornell was a unique place living up to its motto-

“I would found an institution where any person can find instruction in any study.”
–Ezra Cornell, 1865.

I just received a solicitation for an Alumni donation remarking proudly that the Johnson School had entered into a cooperative degree granting partnership with Tsinghua University in the Peoples Republic of China.

it was alarming and sad to receive such a solicitation apparently with little recognition of the context within which they were forging such a relationship.

From various sources condensed into a wiki blurb about the contribution of Tsinghua University to educating the ruling elite of a one-party Totalitarian Government:

Tsinghua University is an institution in the Peoples Republic of China where leadership elite are trained. Regardless of any PRC “charm offensive” the PRC is a totalitarian one party rule dictatorship. The PRC is evolving much like pre-WWII Germany, into National Socialism. It should also never be forgotten that Chairman Mao is accredited in the French book The Black Book of Communism as the most successful mass murder in history.

For over two decades, directly applying skills I learned at Cornell, I have been involved in fighting the Peoples Republic of China in trying to bring sunlight on their criminality while serving at times as a senior Counterintelligance official in the US Government, one example;

He is reported to be a member of the 14K Triad. According to Ed Timperlake and Bill Triplett, co-authors of “Red Dragon Rising”: “Henry Fok first made his name by running United Nations-embargoed goods to China during the Korean War. His son was later convicted for trying to bring Chinese machine guns into the United States.” 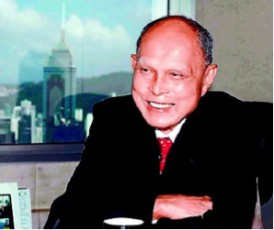 After the 2010 election I was asked to make a presentation to the US Congress:

The PRC had an agenda to not only curry favor with agents of influence but also collect information and conduct espionage operations, a select Congressional committee was created. The extensive report issued by that committee covered significant aspects of US military and commercial dual-use technology that was targeted by PRC collectors. The PRC agent’s success in the 90s and continuing to this day is being seen in the continued rapid modernization of all military forces of the Peoples Liberation Army….

Collectors and agents of influence from the PRC can go after objectives many ways as I have discussed. But beyond the scope of my paper they can also buy their way into America through acquisitions and joint ventures-the money offered in those deals is huge.

So when I received the Johnson School letter I had to just read headlines to see that PRC pattern and practices, yet again, are stifling freedom and they are still cheating in worldwide business.

Two major events were occurring while the Johnson School was soliciting money.

First students asking for promised freedom in Hong Kong are faced with actions by the Peoples Armed Police and Peoples Liberation Army and all can possible see the potential for another Tiananmen Square student massacre.

The New York Times has a very insightful and powerful story:

“Among Tibetans and Uighurs, beleaguered ethnic minorities in China’s far west, there is hope that the protests will draw international scrutiny to what they say are Beijing’s broken promises for greater autonomy.

The central government’s refusal to even talk with pro-democracy advocates in Hong Kong, exiled activists add, also highlights a longstanding complaint among many ethnic minority groups in China: the party’s reliance on force over dialogue when dealing with politically delicate matters.

“FBI director James Comey talked about Chinese hacking — and how basically every American company has been targeted — last night on 60 Minutes. Comey said that it’s not the Chinese are so good, it’s that they’re “prolific.” He likened their hacking style to a “drunk burglar.”

“Well, I don’t want to give you a complete list. But the top of the list is the Chinese. As we have demonstrated with the charges we brought earlier this year against five members of the People’s Liberation Army. They are extremely aggressive and widespread in their efforts to break into American systems to steal information that would benefit their industry,” said FBI director Comey.

“What are they trying to get?”

“Information that’s useful to them so they don’t have to invent. They can copy or steal to learn about how a company might approach negotiations with a Chinese company, all manner of things,” said Comey. “

Over the last two decades individuals concerned about the military rise of the PLA have had to face two shallow bumper sticker intellectual statements.

Both statements using proven hollow words are embraced by enablers and apologists for the PRC. The first was in all things commerce, “If we teach them about capitalism they will become a free capitalist society”. The second was military, “if we treat them as an enemy they will become an enemy.”

Unfortunately teaching free-market capitalism did not work, as the PRC has continued to employ their criminal and unfair trade practices, as the Director of FBI points out. Their illegal profits are funding the most aggressive military modernization build-up in the history of the world.

The other bumper sticker mantra was if you treat China like an enemy they will become one and the NYT accurately shows when China leaders get concerned they can be vicious. Nations around the Pacific Rim have not treated China like an enemy but now as a matter of survival they have to react to PLA aggression and look to America as their proctor.

“The right and left were unified over China,” remembers Ed Timperlake, a former congressional and Pentagon staffer who co-wrote harsh anti-China books like Year of the Rat: How Bill Clinton Compromised U.S. Security for Chinese Cash. The House intelligence committee has a new inquiry into trojan horses packed in Chinese telecom tech. But for the most part, Timperlake dismisses the occasional congressional concern with China as “pretty shallow.”

And for a Reagan Appointee to be quoted favorable in Mother Jones, a reader can see that human rights can bridge across both US Political Parties in standing up against the well-funded trade “uber alis” money driven squishy and greedy middle.

When Deng’s daughter, Deng Rong, visited the United States in 1995, Haig threw a party for her at Worldwide’s Washington offices. “His remarks that day were extraordinary,” says a person who attended. “He was dripping with contempt for human rights activists who try to influence China policy.” Ironically, it is conservatives — those who share Haig’s sensibilities on so many other issues — who are angriest with him on this score.

“It’s tragic that a man who has contributed so much to his country would now become an apologist for China,” says Ed Timperlake, a former high-level Pentagon administrator under Ronald Reagan.

To be very specific, while American pols who are questing for a Presidential Nomination in both parties, have to first see if the voters in New Hampshire and Iowa find them acceptable, a graduate of Tsinghua U made his political mark in questing for power by attacking Tibetans.

The South China Morning Post reported on March 8, 1989, that the central government had deployed 170,000 troops (17 divisions of the PLA) to Lhasa. The divisions include artillery equipped with howitzers, mortars and anti-aircraft guns, infantry, and paratroopers. Aircraft in the region include fighters, bombers, and helicopters. In addition to the military, two or three divisions of the People’s Armed Police (PAP) numbering 30,000 were also stationed in the area

But the situation was slipping into chaos, Hu feared. On February 20, Hu ordered 1,700 armed police to parade in formation through Lhasa in a show of force to discourage further unrest. Hu Jintao anticipated massive demonstrations on the 30th anniversary of the 1959 Chinese occupation of Tibet on March 10. On March 5, a demonstration in Lhasa turned into a riot and police opened fire on civilians, killing ten. One policeman died. At least 40 Tibetans were killed by police in bloody rioting in the days that followed. From the beginning of the crisis, Hu had coordinated with the Chengdu Military Region command to move as many as seventeen divisions, or about 170,000 men, into Tibet.

So when President Xi Jinping, a proud Tsungia U grad, recently tells the PLA to improve their combat readiness the United States and our Pacific allies should be very concerned:

BEIJING, Sept. 22 (Xinhua) — President Xi Jinping stressed the loyalty of headquarters of the PLA at a meeting with PLA chiefs of staff here on Monday. Headquarters of PLA forces must have absolute loyalty and firm faith in the Communist Party of China, guarantee a smooth chain of command and make sure all decisions from the central leadership are fully implemented, said Xi, also CMC chairman.

Headquarters of all PLA forces should improve their combat readiness and sharpen their ability to win a regional war in the age of information technology, he said. The PLA chiefs of staff met in Beijing on Sunday, discussing how to improve the efficiency of military command under new circumstances. Fang Fenghui, chief of the PLA general staff, attended the meeting. Military commanders should have a better understanding of international and domestic security situations as well as the latest military development, Xi said.

On a personal note I find all of this morally indefensible but there is little I can do about it except hope if China ever becomes free they have long memories on all who did not stand for freedom for all Chinese citizens. A simple question to bring transparency and clarity can be asked right now.

Would the Peoples Republic of China accept the Four Freedoms?

Let a global IW battle begin in support of the Four Freedoms and let a public record be established.

Professors at The University of Chicago certainly understand the challenge:

The article mentioned a petition signed by about 100 University of Chicago professors who had expressed concern over the Institute’s impact on academic freedom and urged its closure.