On Wednesday, 2 July 2012, the Commander General of Fort Sill US Army Base, Major General John Rossi, Fires Center and Commanding General, put out a PR blurb on their official “ Centers of Excellence” webpage, with a picture the General having lunch with Rep. Jim Bridenstine (R-Okla.)

They were having a pleasant lunch and discussing a range of topics before the Congressman was announced as departing to visit HHS.

He may have departed to visit HHS but HHS is located on a US Army Base. A US Congressman, the peoples Representative, has every right to actively engage with all non-classified activities on Ft Sill. It is understandable that provisions have to always be made for classified visits, but as our representative, under our Constitution, Representative Bridenstine was well within the scope of his responsibilities:

Taken from the Committee on Government Oversight and Reform:

Congressman Bridenstine said, “There is no excuse for denying a Federal Representative from Oklahoma access to a federal facility in Oklahoma where unaccompanied children are being held.  Any Member of Congress should have the legal authority to visit a federal youth detention facility without waiting three weeks.” 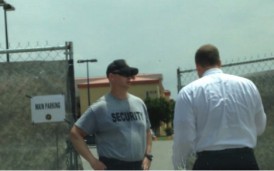 The Health and Human Services (HHS) official who appears to be in charge of the facility told Congressman Bridenstine he could schedule an appointment for July 21.  HHS Deputy Director of the Office of Public Affairs, Ken Wolfe, would not take the Congressman’s phone call.  The Congressman was told to send Mr. Wolfe an email, as that was the preferred method of communication for this “transparent” agency.

The essential element of this event is captured in the statement- “The Health and Human Services (HHS) official who appears to be in charge of the facility.”

So General Rossi, where is the official Memorandum of Agreement or Understanding (MOA/MOU) that allows the Commanding General of a US Army Base to give up the sovereignty of his command?

Can your Army MPs enter the Ft Sill “HHS facility” and a US Congressman cannot?

What are the direct communications from anyone in the Chain-of-Command to General Rossi?

What allowed this to occur?

What was the direction and guidance from the Commander-in-Chief, Secretary of Defense, Chairman Joint Chiefs, Secretary of the Army or Chief of Staff US Army, outlining the scope, mission and legal authority of HHS taking over a facility on an Army base?

All communications to Ft. Sill connected to allowing HHS to have this authority on an Army Base should be made available to the American people.

What about e-mails and communications between HHS unelected bureaucrats and their Secretary?

There are many precedents for joint basing it is the denying of Congressional oversight that is so troubling.

This is not just another in the endless Administration transgressions.

This matter goes right to the heart of Civilian Control of the Military.

Civilian control is both President Obama’s power as Commander-in-Chief and a partnership with Congress having the power to declare war, pass legislation, the purse, and oversight.

On this 4th of July, Independence Day this egregious unilateral action involving both the US Military and a Civilian Cabinet Department cannot be allowed to stand and should be fully investigated by Congress and appropriately acted on by all Americans at the ballot box next November.

Are we really willing to allow a small but nasty step taken toward a potential military/civilian authoritarian partnership?

Think about; what if the Department of Homeland Security is allowed to put a fence and their security guards around a Minuteman Silo/Launch Command post. That principle, however absurd, extreme and easily mocked in print by apologists of all of the Administration’s actions is actually being established.

It is that slippery a slope, and both conservatives and liberals in Congress must react very strongly to protect their Constitutional authority and find out how all this occurred.

As a reminder the last time this type of event occurred was President Carter’s inspired Mariel Cuban Boat lift. It cost Governor Clinton his job, from wiki:

Federal civilian police agencies such as the General Services Administration’s Federal Protective Service provided officers to maintain order inside the gates of the relocation centers. Riots occurred at the Fort Chaffee center and some detainees escaped which became a campaign issue in the re-election defeat of Governor Bill Clinton.