Will Putin Invite Obama to Yalta Next Year for Spring Break?

Last weekend President Barack Obama and his family took their “spring break” holiday in Florida. The president played golf at the exclusive Ocean Reef Club at Key Largo. Vice-President Joe Biden meanwhile was on his “spring break” in the US Virgin Islands.

Obama refreshed from his vacation then met with Arseniy Yatsenyuk, the acting prime minister of the Ukraine, at the White House on Wednesday. 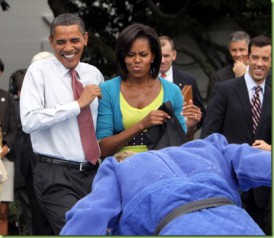 The President Watches a Rough and Tumble Judo Match on the South Lawn.

This weekend the Crimea will vote in a referendum to return the Crimea to Russia. Vladimir Putin by political stealth and the use of raw power has got what he wanted.

The question is what comes next.

A military response by Washington is improbable. Obama rejected the recommendation of his panel of legal advisers to take data storage out of the hands of the National Security Agency.

In any case the networks of US intelligence agencies and private sector contractors have been much too busy spying on German Chancellor Angela Merkel and Brazilian President Dilma Rousseff to pay much attention to what Putin was up to.

Democratic Senator Dianne Feinstein, chair of the Senate Intelligence Committee, on Tuesday, accused the CIA of secretly pulling classified documents from her committee’s computers during a staff probe of the CIA’s interrogation program. She said this was a violation of Federal law. The Justice Department may investigate the allegations

The director of the CIA, John Brennan, who was a high official at the CIA during the administration of George W Bush and was appointed by Obama to be his chief counterintelligence in 2009 adviser before becoming head of the CIA, has rejected the assertions. The spat between the CIA and its Senate overseers gets to the heart of the fraught questions of torture, terrorism and disclosure.

The Pentagon is meanwhile apparently spending hundreds of thousands of dollars studying Putin’s body language to gage his next moves. They should have looked at the body language in the official photographs of Putin sitting next to Obama at the last G8 summit at Lough Erne Resort in Northern Ireland. It would have told them everything.

The question now is if Putin will be satisfied.

Republican Senator John McCain visited Kiev in December. He has complained that the Ukrainian crisis is the “ultimate result of a feckless foreign policy where nobody believes in America’s strength anymore.” Putin would doubtless agree. 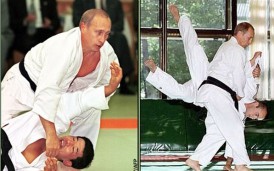 John Kerry, the US Secretary of State, in testimony on Capital Hill on Wednesday about the continuing crisis in the Ukraine said that the administration still hoped for a “reasonable outcome here.” But the real world remains a dangerous place.

Perceptions of weakness can bring heavy costs if it leads opponents to overreach, and risks forcing the leaders perceived to be weak to overreact as a consequence.

The resort of Yalta is a favored hotspot in tourist dependent Crimea. Joseph Stalin, Franklin Roosevelt and Winston Churchill meet at Yalta in February 1945: Not an encouraging memory, especially for Eastern Europe, which was condemned thereafter to decades of Soviet domination.

Putin might even invite Obama and Biden to spend their “spring breaks” in Yalta next year.