One Handshake Too Many: President Obama and Raul Castro?

I was shocked and dismayed to see President Obama extend a handshake to Cuban dictator Raul Castro while attending the Mandela funeral.

This shock came at two levels — first, that the President would use such a solemn occasion to engage in mere politics and would do so in a manner that distract public attention from the funeral itself; and second, that he would make the move in the first place.

It is not every day that we see an American President shake hands with a ruthless, cold-blooded dictator.

For me, however, that handshake takes on a special meaning, if a dark one.

As a former command pilot to Brothers to the Rescue (known as “Seagull Tango”), I recall very well the last time a Democrat President, Bill Clinton, extended a hand to the Castros, hoping to start a new, more positive relationship. 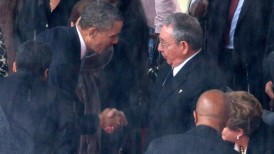 On February 24, 1996, they were shot down and murdered in cold blood by Castro’s MiG fighters.  The order to murder them was given by Fidel Castro himself, on a personal basis.  His brother, if memory serves, at the time having the role of the head of Cuba’s feared secret police, approved of the action.

At that time, the Clinton Administration had embarked on a steady and purposeful rapprochement with Cuba, hoping to finally “put things right” after so many years of poor relations.

What Clinton forgot, however, was that Fidel Castro and his brother, Raul Castro (the current leader in Cuba) were not going to change their stripes after so many decades of oppressive rule and international tricks always sought to embarrass and threaten the USA.

With blinders on, the White House sent a series of delegations to Havana, one famously lead by none other than Gov. Bill Richardson, who hailed his meetings with Castro to be a breakthrough.  After all, he had enjoyed a baseball game alongside Fidel in a private box in Havana while they sat together smoking Cuban cigars and the Cuban leader had seemed affable enough.

Fidel’s primary concern was the ongoing embarrassment to his country that came with thousands of Cuban refugees fleeing across the Straits of Florida in rafts — the well-known balseros.

In a first attempt to embarrass the US and Clinton, Castro had announced that any who wanted to row to freedom could leave, though they would have to do it on makeshift rafts rather than by safer means, such as by booking airline tickets!

While thousands waded into the open ocean and survived due to a massive US Coast and US Navy rescue effort (in which Brothers to the Rescue and others took part in a coordinated effort), perhaps another couple of thousand died in the attempt, putting yet more blood on the already deep red hands of the Castros.

When that maneuver didn’t get the full change in U.S. policy he desired, Castro set his sights on the group Brothers to the Rescue, which he dubbed a “terrorist organization”, though the U.S. Government itself confirmed that the group had done nothing illegal or “terrorist” at all — rather, it aspired to set a new example of non-violent resistance to Fidel Castro’s rule, an approach based on the teachings of Dr. Martin Luther King, Jr., and Gandhi.

It is well documented that the group’s worst “crimes” were saving the lives over 15,000 Cubans at sea.

Some months earlier one of the group’s planes had dropped a small packet of leaflets over Havana that quoted the UN’s human rights conventions, to which Cuba was already a signatory.  Interestingly, as Cuba’s own spies confirmed (later publicly!) that those “offensive” leaflets had been dropped from outside of Cuba’s 12-mile limit from high altitude.  They had floated into Cuba on the wind, by chance and against all odds falling into the streets of Havana itself.

From a US and Federal Aviation Administration standpoint, the leaflet drop had been entirely legal.

Another time, as a press stunt, another of the group’s plane had made a run over Havana itself and dropped a handful of Catholic religious medals and some bumper stickers that read, “Hermanos al Rescate”.  For that act of defiant non-violence, the pilot (the group’s own leader, Jose Basulto) was temporarily sanctioned by the FAA, though his flight certificates weren’t revoked.

In retrospect, these acts seem trivial, yet for Castro they amounted to the ultimate sins.

His carefully calculated response was to tell the Clinton Administration that he was interested in improving relations with the USA as well, all the while planning on shooting down the Brothers to the Rescue aircraft.  For the next few months, he steadily lined up the cards so that he could claim some political cover and justification.  Meanwhile, the Cuban Air Force was ordered to practice the shoot down of the planes and test various systems.  As part of Cuba’s response to the Clinton’s foreign policy intermediaries, Castro made it clear that Brothers to the Rescue had to be stopped.  That matter became a precondition to improving relations with the USA.

Finally, just a little more than a week before the murder, Fidel Castro went so far as to ask the Clinton Administration for permission to murder American citizens, a point that is well documented in sworn testimony, documents and official reports.

Stunningly, the Clinton Administration was so enamored with the idea of improving relations with Cuba that it failed to respond to the murder threat.

One Administration representative even went so far as to discuss the matter with Fidel himself as a public relations problem, rather than addressing it for what it was, cold-blooded killing of American citizens which could never be condoned or allowed.

For Fidel, the picture was clear — the Clintons were so interested in improving relations with Cuba that the ends might justify the means.

In the end, President Clinton’s attempt at improving relations with the famous dictator brothers of Cuba ended predictably with the deaths of four of my friends — two planes shot out of the skies by Cuban MiGs, both of which were well north of Cuban airspace and flying eastward at the time, parallel with Cuba’s coastline as they searched for balseros on the waves below.

The missiles fired by the Cuban Air Force MiG-29 at the two Cessnas were nearly as large as the Cessnas themselves — the four men killed were almost certainly killed instantly as the planes were literally blown out of the skies.

They were so far north of Cuba that a passenger on an American cruise ship, the Majesty of the Seas, filmed the aftermath of the attack.

Many others witnessed the murder.

I recount this history as a reminder to us all of just what Cuba is capable of doing.

Now, after 50 years of unrelenting hatred fomented by the Castros of all things American, it seems that President Obama has stepped forward to extend his friendly hand.

It feels like “deja vu all over again”, as Yogi Berra once famously said.

To me, this senseless act of shaking Raul Castro’s hand is the ultimate insult to history, to my friends who so needlessly were murdered, and to what America stands for.

It is no secret that I am a critic of the Obama Administration’s foreign policy, though to this point they have not attempted to make the mistake of engaging with Cuba hoping for improved relations as past White Houses have done.

Moreover, it seems clear already that the move shocked not just the media and the public (particularly those in Miami and the Florida Keys) but even the White House staff and the State Department.

In the end, we have to ask what type of country have we become that on a whim we shake the hands of dictators and murderers?  What did we get in return for this dramatic move?  What slim hope do we have that the Castros have changed?

Is this act today part of a coherent, well-thought out policy or just another example of blind hope by an ill-informed President?

It seems clear to me, Mr. President, that the Castro brothers haven’t changed their stripes — not now after 50 years and, it seems obvious, probably not ever.  Just as President Clinton found out in 1996, when you look into the abyss, the abyss will look into you.

Be careful what you do, Mr. President, or you too will be played a fool by the Castros.

Thomas Van Hare, known as Seagull Tango, was a command pilot and mission director with Brothers to the Rescue and flew extensively from 1992 to 1995, helping to save the lives of thousands of Cuban Balseros.

He is also a three time White House appointee and former member of the Executive Committee within the Office of the Secretary of Defense.  He has been involved in humanitarian assistance operations worldwide and more recently was deeply involved in the reconstruction programs for Iraq and Afghanistan.

Along with the well-known Florida Keys author, Matt Lawrence, Mr. Van Hare is co-author of the well-documented, deeply researched best-selling book on the Brothers to the Rescue shootdown called, “Betrayal: Clinton, Castro & the Cuban Five”, which may be found online at www.mattlawrencebooks.com and is available at all online bookstores.

Editor’s Note: For another historical look at the earlier events see the following: