Why I Support Chuck Hagel as Sec Def

By Craig A. Pirtle

I couldn’t be more pleased about the nomination of former Senator Chuck Hagel as U.S. Secretary of Defense.

Let me tell you from my perspective and experience why this is the case.

As Americans, we should feel honored to have such a dedicated and patriotic leader serving in the best interest of our military at the highest level. 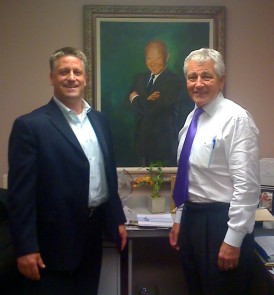 The author with Chuck Hagel. Credit: Craig A. Pirtle

I have had the pleasure of meeting Mr. Hagel on several occasions to specifically discuss veterans affairs.  Our common bond is that we both started our military service as enlisted Army soldiers, and though our journeys have greatly differed, we both took the best of what the military offers and have built rewarding careers from that foundation.

In addition, we share a passion and sensitivity for helping veterans and their families.

In my opinion, no one understands better than he the sacrifice and commitment of our military.

He has dedicated his life to distinguished service and is a true testament of how the enlisted ranks can lead to a successful career in both the public or private sector.

I appreciate the time Mr. Hagel took from his busy days  on more than one occasion to talk with me and even meet my family.

I connected with him as a fellow former enlisted soldier looking to help other veterans.  The military had a profound impact on my life and I valued my experience greatly.  I wanted give back for all that I had gained.

As a young man from Maine, I had signed up for the Army while in high school.  In my family, it was a tradition and moral duty to serve, and I felt honored to follow in the footsteps of my ancestors.  In the Army, I embraced the camaraderie of the men I served with and to this day remember the many role models that became my surrogate fathers and brothers.

Throughout my time in, I gained invaluable skills that I utilize to this day in my professional career:  leadership, integrity, agility, focus – just to name a few.

Ultimately, I became a tank commander serving on the Korean DMZ then used the Army G.I. Bill to attend college in New England where I studied political science.

I went on to establish a career in investment management.

While I take much pride in my military service as an enlisted soldier and have parlayed it to a career on Wall Street, my story is not exceptional like that of Mr. Hagel’s.

His extraordinary efforts in Vietnam which earned him two Purple Hearts demonstrates insurmountable leadership and courage.

He too leveraged the G.I. Bill to pursue higher education and ultimately higher office after establishing a successful business career.  It’s what we do with the tools we are given that make us all we can be, and he is a great example of that.

What I was most impressed with in my meetings Mr. Hagel in the past recent years was his genuine interest and commitment to veterans.

We’ve shared ideas how to help returning vets of the recent wars in Iraq and Afghanistan, particularly those injured in combat.  He is compassionate and has an intent desire to help those who sacrifice so much.  After all, he can relate.

Our conversations provided valuable insight as I have pursued fundraising efforts to support wounded veterans and their families.  There is great need, and we can all play a part in ensuring veterans are properly honored and empowered as they transition to civilian life.

I look forward seeing Mr. Hagel in this new role as Secretary of Defense as he continues his great journey.

We will all benefit from his leadership.

Editor’s Note: Craig  Pirtle  has put in words the great common bond veterans have for each other.  Chuck Hagel’s dedication to fellow warriors  is captured in Craig’s words of their common bond of proudly serving in  the US  Army.

That  service in our Nations History has empowered men and woman  to go forth  to help other veterans and also continue to make  strong contributions to America as a citizen-soldiers. This service goes  to the very basic fabric of our free society.