Senator McCain is talking tough on the Arab Spring.

Particularly in those parts of the Arab Spring countries where well, Spring is a tough call. 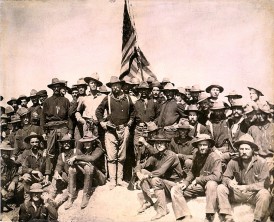 The TR Version of the Rough Riders. Credit:http://en.wikipedia.org/wiki/File:RoughRiders.jpeg

Although Syria has a leader whose wife is a true knock out, if you are a protestor it is not so pretty. Being a dissident in Syria seems to not be a prelude to a voting process, but suppression or worse.

No one living in the West would condone Assad’s actions.

But what to do about it?

We are hearing the usual bromides of “outrage” or a “call for UN action” or “aiding the rebels” or “robust support to the rebels.”

Remember those Russians who have been reset?  Well they seem to have not become effectively “civilized” by the Inside the Beltway bunch and are aiding not the rebels but Assad.  The Russians seem to believe that their interests are best served by Assad and not his opponents.  The black belt President of Russia seems more upset than reset.

Providing arms to Assad and re-enforcing the ability of the government to deal with the opponents of the regime, the Russians seem to be pursuing their interests as they see it, not the best interests of the Arab Spring.

But Inside the Beltway the voice of action stirs.

And one of the masters of the tough words and directed anger, Senator McCain is calling for “robust support to the rebels.”

U.S. senator John McCain has said that anti-Assad fighters are directly supplied with weapons from Arab Gulf states and wants Washington to follow that lead. McCain has called as well for the United States to immediately begin arming the Syrian rebels and establish a safe haven for them in the country.  He has even called for air strikes to support the Syrian rebels.

OK we get the instinct, the anger and the desire.

But intervene in a country backed by Russia and Iran and expecting the Russians to stand aside?  So where is the Plan to take on the Russians directly?  To use McCain’s own words, the Russians are behaving in a way that our least optimistic assessment of [Vladimir] Putin’s behavior … has been realized.” 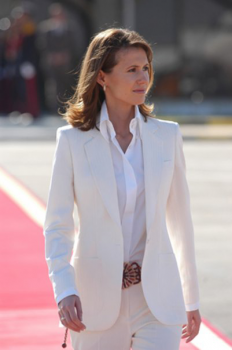 Take her credit cards away! http://www.inrumor.com/wp-content/uploads/2010/11/Asma-al-Assad-The-Most-Beautiful-First-Lady-1.png

We asked Boomer to sort out how to connect the Inside the Beltway words with real action?

How are we going to aid the Syrians without getting into a direct confrontation with the Syrian regime and the states that support them?

Boomer: “From my perspective as a Vietnam veteran, I see it differently than Johnny Mac.  We do not need to throw ourselves into an uncertain situation where the only certainty is that the Russians have clearly defined their side.  A direct confrontation with Russia over Syria after years in Iraq and Afghanistan is not going to be a widely supported action.”

But can we do nothing?

Boomer: “There is a private sector solution.  For those like Johnny Mac who feel strongly about intervention, they can do it themselves. There is a long and glorious tradition such as in the Spanish Civil War of volunteers going to Spain to fight against Fascism.  That eventually became part of a global war, but it was a glorious moment nonetheless.

Why not have Johnny Mac leave the Senate and form up a private special forces group which we could call McCain’s raiders or McCain’s rough riders and fly over the Syria and work with the Saudis and other fundamentalism Muslims seeking to oust Assad.  That way the confrontation with the Russians would be completely deniable by the White House.  And the Russians would be reset again by a tough talking Senator, now leader of the Raiders.”

The Raiders could perhaps do something bold like deny Assad’s wife the right to use her credit cards on a Western shopping spree, or visit the training centers in Saudi Arabia for supporting fighters abroad, or other such allied posts of support.

There is no end of actions possible to tighten the hold on Assad.

Only Inside the Beltway could one imagine intervening against the Russians directly and assuming away well, an on the ground confrontation.  By the way, who are we sending, and for what purpose exactly?

Oh that is right, I forget — the blossoming of the Arab Spring and all of those democrats running loose in the Middle East. A good thing is that they can not be Islamic fundamentalists of the sort who fly airplanes.

And the last time we engaged the Russians-Thank God judgement and insight won out over political posturing!

The incident attracted controversy, particularly in the United States, and earned Jackson the nickname “Macho Jacko” in the British tabloid press.

“I made it clear to Clark that I was fed up with taking orders from Washington, from people who seemed to have no appreciation of the problems on the ground.

“Mike, these aren’t Washington’s orders, they’re coming from me.”

“By my authority, as SACEUR.”

“You don’t have that authority.”

“I do have that authority. I have the authority of the Secretary-General behind me on this.”

“Sir, I’m not going to start World War Three for you.” Again Clark stated what he wanted done. I said to him: “Sir, I’m a three-star general, you can’t give me orders like this. I have my own judgment of the situation and I believe that this order is outside our mandate.”

“Mike, I’m a four-star general, and I can tell you these things.”

It strongly denied U.S. media reports claiming that a Black Sea Fleet warship had already headed for Tartous. “All the ships are staying in Sevastopol but the Cesar Kunikov large landing ship. Either the U.S. intelligence service works poorly or they have a poor knowledge of geography,” the source said.  The U.S. media said that Russia had sent a small group of servicemen to Syria for protecting the Tartous base.

NBC said with the reference to a U.S. official that the servicemen were going to Tartous aboard a warship. The State Department spokesperson said she could not confirm the NBC report.  A group of Russian warships led by the Admiral Kuznetsov heavy aircraft carrying cruiser visited Tartous in January. The group visited the port for replenishing reserves and giving maintenance to ship systems.  Tartous is the only Russian naval base outside of the former Soviet territory – this is the logistics center serving Russian ships on missions in the Mediterranean Sea. The base opened in 1971 under an agreement with the Syrian government.