What is a NATO summit?

The West and East (these days in any case) are coming to Chicago this month to have a NATO summit. This of course raises two questions: What is a NATO summit and how well does Chicago do in having big events?

The second is critically important given the current President, his politics, his background and his “Chicago” style.

We started our conversation with Boomer really with the second question.

What does Chicago mean to you Boomer?

Boomer: “I will always remember 1968 and the solid support our troops got from the Chicago hosted Democratic National Convention. I will always remember images of the delegates beating each other up inside the convention hall and the battle for Michigan Avenue. If we could have only brought that fighting spirit from Chicago to Vietnam, oh well?”

But Boomer that was a long time ago? Chicago is different now surely?

Boomer: “You’d hope. Although the only constant seems the performance of the Chicago Cubs. But we hear Inside the Beltway that the Secret Service (after they came back from fun and games outside the US) are working to shut down the city to protect the various NATO dignitaries from the violent Chicagoans. And we hear that many protestors are coming to Chicago to express their feelings about NATO or whatever. They key to coming to Chicago seems that it is great place to get out your feelings of negativity and to be seen to be on the right side of history.”

We decided to “FACT FIND” (an important function when operating in journalistic mode) to see if what Boomer suggested was true. Fact finding is easy now, you just load up your browser and find an “original” source.

Thousands of police officers — including reinforcements from Philadelphia, Milwaukee and Charlotte — will be deployed; a no-fly zone will be enforced; and some commuter trains will be canceled. Businesses are boarding up windows; Lake Shore Drive and the Art Institute will close, and the Postal Service warns of delivery delays.

Hosting the North Atlantic Treaty Organization, a 28-country military alliance, is a coup for President Obama’s adopted hometown. The city also was to host a Group of Eight meeting of the world’s largest economies this weekend, but it was moved to Maryland’s Camp David. Obama arrives here Saturday.

The Chicago NATO Host Committee spent $65 million and says the meeting will generate $128 million in spending. “This is a tremendous opportunity for Chicago to really promote itself on the national stage,” Executive Director Lori Healey says.

It’s also a risk, says Allen Sanderson, a University of Chicago economist. “I just look at this as a perfect storm,” he says. “The protests become the story.” He also questions projected economic benefits. “If it goes well, we get a small positive bounce. If it goes poorly, we get a huge negative,” he says.

A dozen arrests already have been made, but Occupy Chicago and the Coalition Against NATO/G8 War & Poverty Agenda say their rallies and marches will be peaceful. “We believe that when there’s an injustice, it’s the duty of humanity to take action and speak out,” says coalition activist Joe Iosbaker.

Ok it seems our original source confirmed what Boomer was saying so now we deep dived on the weighty foreign policy issues of the day. 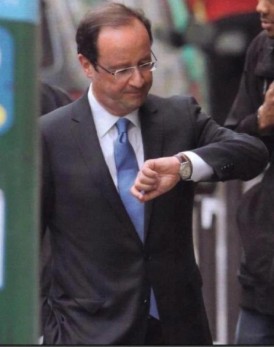 President Hollande will come to the NATO summit to provide a new impulse for change inside the Alliance.

What is a NATO summit from an inside the Beltway perspective?

Boomer: “NATO summits are VERY important to Inside the Beltway business. Every word tank has a seminar and meeting on the FUTURE of NATO or the FAILINGS of NATO. The bad news would be if NATO went away because then you would have to actually look at military and security options and operations, which is a lot of work.

NATO summits are important to sitting presidents because they get to show their wizardry in managing global affairs. So President Obama who used to be a community organizer is now a man who has three years of EXPERIENCE behind him as opposed to the UNTESTED challenger he will face in November.

And NATO summits are great places for NEW leaders to come and to provide new energy for the Alliance in managing the world.”

So NATO summits are important stages for well, STAGING?

Boomer: “NATO summits are crucial PHOTO opportunities. And as you expand the organization, the key challenge is to bring a wider angle lens to capture the growing number of LEADERS OF THE FREE WORLD.” 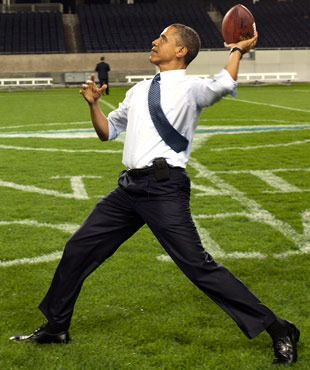 Leadership is always important for the Alliance. Here President Obama gets ready for his day job. Credit Photo: NFL.Com

Of course, NATO summits are a great place to have found and to do tourism as well.

This is how leaders become GLOBAL leaders, you need to get some frequent flyer miles before your next election to show that you understand the challenge of globalization. And going to Chicago for non-Americans is certainly a way to punch your ticket to prove your globalization mettle.