The breadth of the Air Force’s expanding missions is revealed in a startling statistic: Even if the service retired its entire fighter, bomber, and ICBM inventories, USAF spending would decline by only about 25 percent. The bulk of Air Force spending today goes to air mobility, space operations, enablers of joint forces, and intelligence-surveillance-reconnaissance capabilities. 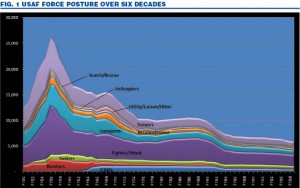 As shown in Fig. 1, the Air Force began a period of significant growth in 1950, with the confluence of the outbreak of the Korean War, the growing Soviet threat, and the Eisenhower Administration’s adoption of nuclear deterrent strategy. The service reached a peak of more than 26,000 aircraft in 1956. A masterful advocacy campaign by USAF illustrated airpower’s value to the new strategy, and resulted in nearly 50 percent of the military budget belonging to the Air Force…..

Defense spending increased following the terrorist attacks in the US on Sept. 11, 2001, but little actual procurement of new systems took place, while operational demands grew…..

Aircraft designed with multiple missions in mind from the outset tend to have the space, weight, power, and cooling capacity necessary to easily adapt them to emerging missions. ….

For mobility aircraft, the Air Force was able to increase its airlift capabilities while operating a smaller fleet by acquiring more capable aircraft and making organizational improvements. 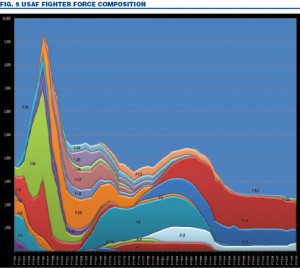 From: Arsenal of Airpower