Will the Helsinki Summit Reduce Tensions: The Case of Reducing Threats to Air Combat Crews

When American military lives are at risk the world media should focus on the words spoken in Helsenki with some hope.

A very ugly US Vs USSR “Cold War” incident that cost the lives of three USAF Officers bears witness to paying close attention to the promise of better relations announced by both Presidents.

The 1964 T-39 shootdown incident occurred on 28 January 1964, when an unarmed United States Air Force T-39 Sabreliner on a training mission was shot down over Erfurt, East Germany by a Soviet Mikoyan-Gurevich MiG-19 fighter aircraft.[1][2][3] The occupants of the aircraft were Lieutenant Colonel Gerald K. Hannaford, Captain Donald Grant Millard and Captain John F. Lorraine. All three died,[4]becoming some of the few US confirmed direct casualties of the Cold War in Europe.

Residents from the nearby town of Vogelsberg in Thuringia erected a memorial to the three downed pilots, in 1998, once the “Iron Curtain” had been lifted.

The Helsinki meeting between Putin and Trump can be measured as a success in part against progress on a key issues, namely the attenuation of such a threat occurring again.

And with the Russians regularly threatening US and allied pilots by close encounters but not of the extraterrestrial type, it is about time to sort through this challenge. 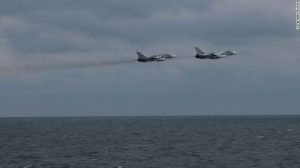 President Putin clearly promised to do so.

The Cold War is a thing of past. The era of acute ideological confrontation of the two countries is a thing of the remote past — it’s a vestige of the past.

Let me remind you that both Russian and American military have acquired a useful experience of coordination of their action, established the operational channels of communication, which permitted [us] to avoid dangerous incidents and unintentional collisions in the air and on the ground.

And President Trump has launched a policy process to engage the Russians on this and other key issues as well.

We also agreed that representatives from our national security councils will meet to follow-up on all of the issues we addressed today and to continue the progress we have started right here in Helsinki.

Make no mistake as a Marine Fighter pilot who scrambled against Russian fighters coming out of Cuba at the height of the Cold War, I have no false illusions but a real hope for a safer world for all combat aviators.

In an Air Power Summit in Copenhagen Denmark in 2015, with Russians invited I stopped my presentation beginning at the 6:39 time hack to interject a very strong signal to Russia to “knock it off” with their fighter pilots flying dangerously close  our non-ejection seat Intelligence aircraft.

I am also sure they got my point when I quoted the late great American “warrior princess” Joan Rivers that when faced with incredible stupidity she simply said “Oh grow up.”

Consequently, a very significant point is being overlooked, in the over the top hot house rhetoric by many in the media,  and even with “not so” friendly fire from Republican’s who should know better.

True dynamic progress was made that can now continue by having Russian and US National Security teams engage as expressed by President Trump.

If President Trump had not gone to Helsinki to meet President Putin the world would be a more dangerous place, especially for our serving military.

As the history of “Cold-Hot War” in the air shows it was a constantly evolving process of human factors integrated into technology.

The Cold War ended well for humanity and a lot of courageous pilots, bold leaders, and smart technologists deserve a lot of credit for this great victory.

The U.S. would be wise to remember the lessons learned and along the way the loss of very good men in the air who paid in their blood for America today to have the best technology available flown by best Air Force, Navy, and Marine aviators this country can produce.

So please all stop the political posturing, harvest the best and leave the rest, to recognize the world has just become a much safer place because of President Trump’s political courage.

If the Russian Air Force continues to “buzz” American military ships and planes then President Putin on this issue cannot be trusted.

That World Cup ball is now firmly still in his court going forward.

A version of this article was first published by American Thinker on July 18, 2018.