The Beer Hall and Chancellor Merkel: A Memorial Day Remembrance?

What God awful timing from German elected leaders that they picked Memorial Day to make belittling remarks against the American way of selecting leaders, who whatever their faults always try to be a force for good in the world.

In making such remarks, in Bavaria no less, doesn’t the Chancellor of Germany have any grasp of American history and how important it is that we honor Memorial Day? 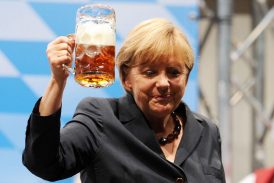 Her Vice Chancellor could not resist adding a directed insult that U.S. citizens in voting in a President to “Make America Great Again” has somehow made the West weaker.

“And Vice Chancellor and Foreign Minister Sigmar Gabriel, also a Social Democrat, said Monday that if the Trump administration “finds pushing through national interests more important than an international order… then I say that the West has become smaller – it has at least become weaker.”

Always good to know that Germany does not follow its national interests, which Chancellor Merkel seems to be stridently pursuing in her election bid as she not only takes out her axe against the U.S. but Britain as well. Or put another way, she is leveraging the election of Trump and the British vote in favor of Brexit to assert that Germany is now leading the West.

And that is hardly self-serving is it?

Only President Trump in this 21st Century epic war has the same Reganesque formula for ISIS –“We win-they Lose.”

Is that direct and simple enough?

And the “simplistic” message which Reagan delivered allowed Merkel to eventually become a German rather than an East German citizen.

But I guess it is best to grasp which simplicities you favor and those that you don’t?

Make no mistake, the President and American people are united against ISIS and sadly some of our warriors have made the greatest sacrifice to stop pure evil that directly threatens Europe and the world.

And Merkel’s own contribution of letting in the greatest influx of migrants in recent European history seems to be her contribution to date.

In branding ISIS as losers President Trump makes the same type of very simple and direct branding that President Reagan did with Evil Empire and his moment in history—“Tear Down This Wall!”

As a generation of American warriors continue to pass on to have their names added to a roll call in heaven standing tall with their fellow warriors, a giant in American history was with President Trump at the Arlington Cemetory Memorial.

Madam Chancellor and your Vice Chancellor meet the Honorable Bob Dole, formerly 2nd Lieutenant Dole United States Army, who was present and accounted for when President Trump made his very poignant speech at Arlington Cemetery.

Robert Joseph Dole was born on July 22, 1923 in Russell, Kansas, a small plains town. He grew up with his mother and father, two sisters and a brother in a small frame house. His father ran a cream-and-egg stand and his mother sold sewing machines. During the Depression, the Dole family pulled together in the most difficult of financial times. The Doles moved into the basement of their home and rented out the rest of the house. As Elizabeth Dole recounts of her husband, while the Doles “were poor, perhaps, in material things, they were rich in values – values like honesty, decency, respect; values like personal responsibility, hard work, love of God, love of family, and patriotism.

When a boy, Bob worked at the local Russell drug store, Dawson’s Drugs, as a soda jerk where he learned the power of having a good joke at hand for just the right customer, as well as learning to serve a diverse public. Dole also worked as a newspaper boy. As a young man, Dole enjoyed and excelled in athletic endeavors including football, basketball and track. 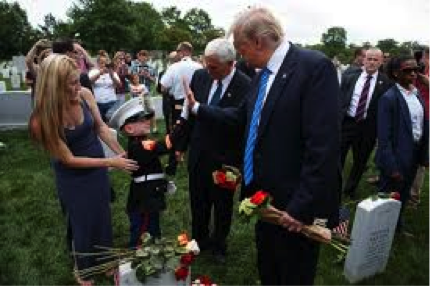 He became a second lieutenant in the Army’s 10th Mountain Division, and in the spring of 1943, found himself in the hills of Italy fighting the Nazi Germans.

Under a heavy shelling attack, Dole saw the Army radioman go down.

He crawled out of his foxhole to try to rescue the wounded soldier, but was instead hit by gunfire himself. After the battle, the medics thought Dole would die, however Dole did survive with a shattered right shoulder, fractured vertebrae in his neck and spine, paralysis from the neck down, metal shrapnel throughout his body and a damaged kidney.

The doctors did not think that Dole would ever walk again. Dole was decorated twice.

The story is that to this day, Dole still has the cigar box with receipts of donations of the monies collected for his hospital bills by Dawson’s Drug Store and the people of Russell, Kansas.

He keeps this as a reminder of their generosity and love.

So, how about a little respect and humility on the parts of the Chancellor and Vice Chancellor of Germany, a country united in freedom due in no small part to America.

Picking Memorial Day to score domestic political points is hardly demonstrating what the Chancellor clearly thinks she is, namely a global leader.

And it is clear that ISIS, the Peoples Liberation Army, North Korea and Russia hardly see President Trump leadership of America and any Allies in support as somehow making the global order “weaker.”

Complexity in support of inaction is hardly a leadership principle but denigration of the American electoral process is hardly one either.

As the new Casey Stengel, Dusty Baker, the manager of the Washington Nationals, put it after watching his prize hitter, Bryce Harper, being thrown at by the opposing pitcher on Memorial Day in San Francisco:

“We’re not here to brawl.

“But we’re not here to take any stuff either.

Like I said, most teams I’ve had we don’t start anything, but we don’t take nothing.”