Immigration Controls and A Commitment to the Four Freedoms

Judge James Robart, who was appointed by former President George Bush in 2003, ruled the executive order would be stopped nationwide, effective immediately.”

This is the type of Judge President Jeb Bush would have appointed to the Supreme Court.

The Main Stream Media has become an echo chamber attacking the Trump decision which was a core plank upon which he ran for President.

Many Democratic leaders are in total denial because the Media are nothing more than their enablers for the most part using willful blindness to literally ignore not just in the room but “The Elephant walking into the State House.”

Consequently, while they all take a Pyrrhic  “victory lap” long term confidence in President Trump’s judicial appointments will become  a real issue in his favor.

Rasmussen Reports filtered out media hysteria and asked likely voters: “The federal government has banned refugees from all countries from entering the United States for the next four months until there is a better system in place to keep out individuals who are terrorist threats. Do you favor or oppose such a ban?” A majority, 52 percent, favored the move, while 43 percent opposed it, and six percent were unsure.

Men strongly approved of the temporary ban, with 61 percent supporting it and 34 percent opposing it. Only 43 percent of women support it, while 51 percent oppose it.

Younger voters are far more in favor of the moratorium than older ones: Of those aged 18 to 39, 57 percent favored the ban. Meanwhile, 49 percent of voters aged 40 and older approved of the ban.

When it came down by political affiliation, 82 percent of Republicans approved of the refugee freeze while 15 percent disapproved. Over a fifth (22 percent) of Democrats approved, while 71 percent opposed it. Of voters not affiliated with either of the two major parties, 54 percent approved and 40 percent disapproved.

A similar Reuters poll conducted from Jan. 30 to Jan. 31 found those strongly supporting Trump’s move to halt refugee resettlement outnumbered those that strongly opposed it three-to-one.

Moreover, a majority of all voters want a dramatic reduction—or as Trump once put it, “a total and complete shutdown”—of immigration into the U.S. A non-partisan poll taken before Election Day found 54 percent of voters would like to see immigration levels halved or reduced to zero, with 58 percent agreeing illegal aliens should not be allowed to stay in the U.S. at all.

Tragically let us hope not, but just one domestic attack with a killer screaming allahu akbar is all it takes, especially with Democrat Senators slow rolling appointments, because the Democrats and Media now 100% own the issue of weakening America security.

Watch for the former acting AG Yates to become a hero for a few days.

But where is Congress?

NOW that is a real Sheriff Will Kane High Noon Moment. 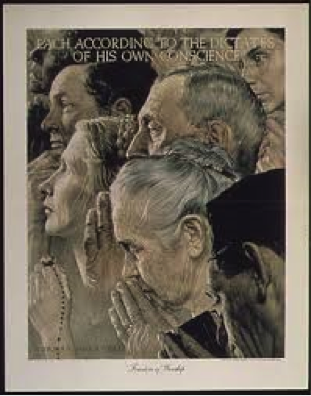 All those legally coming to America to become citizens need to commit to President Roosevelt’s Four Freedoms.

Christians, Jews and atheists most certainly do.

If followers of Islam can sincerely and honestly set aside this type of guidance in following the Quran:

Quran (3:28) – This verse tells Muslims not to take those outside the faith as friends, unless it is to “guard themselves” against danger, meaning that there are times when a Muslim should appear friendly to non-Muslims, even though they should not feel that way..

And then if they honestly and sincerely tell truth that they will not kill those who do not worship Allah and quest for Sharia Law in America, then one of the bed rock principles of America will stand—Freedom of Religion and are welcome.

Quran (8:38-39) – “Say to those who have disbelieved, if they cease (from disbelief) their past will be forgiven… And fight them until there is no more Fitnah (disbelief and polytheism: i.e. worshipping others besides Allah) and the religion (worship) will all be for Allah Alone [in the whole of the world ]. But if they cease (worshipping others besides Allah), then certainly, Allah is All-Seer of what they do.

It is not about being excluded on religions grounds; it is about tolerance of others and embracing the four freedoms as a precondition for becoming a new citizen.

It is about strengthening democracy; it is not about allowing anyone who wants to become an American into the country.

In a democratic system, the citizens must support the rule of law and the tolerance of other citizens.

They are not obligated simply to expand the work pool for IT firms or to let in those who are simply knocking on the door.

It is about a real cultural commitment to the Four Freedoms and to American democracy.

This need not be a partisan issue; it is about the right of the country to shape its own destiny and to reaffirm its values.

It is not about simply being a target landing place for the hidden hand of globalization.