Trump Raised the Question about the Future of Extended Deterrence: The Chinese Challenge

During President Obama’s meeting with President Elect Donald Trump, a “big problem for the country” was discussed.

North Korea and its nuclear ballistic missile program was identified in September as the first problem for the Trump Administration.

President Elect Trump will be briefed by the priesthood of China / North Asia experts on the issue, and will hear their pitch for the continuation of multilateral diplomacy based approaches to solving the problem — the approach that repeatedly failed for decades and got us to where we are.

Except that today, or by 2020, the NORK problem have turned from a nuclear ballistic missile threat to allies like Japan and South Korea, and perhaps US bases like Guam, to a problem that directly threaten every major U.S. population center including those of happy go lucky free riding allies like Canada.

U.S. Co-operation with the Beijing regime, administered by the “China Expert” priesthood, produced a direct threat to the United States by one of the most irresponsible, unpredictable, irresponsible, and dangerous powers in the world. 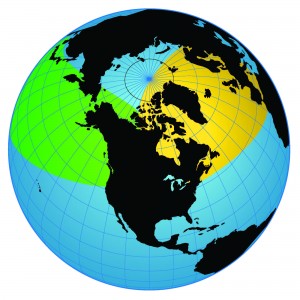 This is a notional rendering of the 10 and 2 O’Clock challenge discussed in Admiral Gortney’s interview. It is credited to Second Line of Defense and not in any way an official rendering by any agency of the US government. It is meant for illustration purposes only.

Yet, the priesthood maintain that their approach is the only way even as PRC’s intransience appeared to have risen to a new level with arguments that THAAD based in South Korea threaten the allegedly small nuclear force controlled by Beijing, and Beijing’s insistence on no deployment as a precondition for increasing sanctions on North Korea.

The Beijing Regime alleged that THAAD 10 extra minutes of warning of missile launches from China.

PRC diplomats claim THAAD threatens the “terminal” and “mid-course” phases of their intermediate range and ICBMs.

One perspective is to take Beijing’s statements as technical errors by diplomats poorly trained in the technical details of arms control.

From this, it follows that Beijing’s allegations and opposition to THAAD are technically unsound based on any plausible assessment of THAAD capabilities and the flight path of PRC’s nuclear ballistic missiles.

The actual numbers of launchers deployed have sharply risen.

However, if it is the case that the PRC regime in fact have substantially more nuclear weapons deployed than they claimed, particularly on intermediate and short range missiles aimed at Japan, S. Korea, and US bases, it will lead to a very different conclusion.

An increase in warning time of 8 to 10 minutes may not make much of a difference for an ICBM attack on the US.   Nor will it make much difference for a retaliatory strike against US allies aimed at population centers consistent with the “No First Use” policy declared by the PRC Regime.

However, reducing the warning time will have substantial impact on the ability of Japan, S. Korea, and US bases like Okinawa, Guam, etc. to activate defense systems like Patriots that defend relatively small footprints like military bases.

Extant anti-ballistic missiles like Patriots and sea based Standard Missiles are only “moved out” on alert, with only a small percentage of the systems held at high levels of readiness.

PRC use of “terminal” and “mid-course” terms, rather than being technical errors, it is exactly the right term to describe the course of ballistic missile attacks on Japan and major US bases like Okinawa.    PRC knows that early warning and cueing data from THAAD can be flowed to Patriots and Aegis in an integrated ABM system.

If the PRC’s intent is to be able to launch a nuclear first strike at installations protected by Patriots and Aegis systems, then their objection to THAAD is technically sound.

Rather than being threatened by a handful of THAAD interceptors, Beijing’s plans for a nuclear missile attack on Japan would be frustrated by far more numerous Patriot and Aegis interceptors.

If they are given sufficient warning to be deployed.

It is well known that PRC have substantial inventories of medium and short range ballistic missiles.

A nuclear ballistic missile first strike offers the opportunity to destroy the conventional arms capability of US and allies in the region in a lighting first strike.

If the PRC actually have thousands of warheads as opposed to 250 alleged by a number of arms control advocates, a nuclear first strike aimed at allied military installations makes sense.

The PRC’s nuclear arsenal is not subject to any arms control agreements, or any credible verification.

Perhaps Beijing is not as toothless or benign as they want the world to believe.

Editor’s Note: With the election of President Trump, there is the possibility to relink at key security questions with a fresh eye.

Clearly, one of these involves China’s support for North Korea and their nuclear policy and its impact on the region and the United States.

Trump raised the issue of extended deterrence during the campaign, and it is a real challenge, not easily dismissed by pursuing past policies.

There is clearly a need for a fresh approach.

We have done so on an earlier Second Line of Defense Forum on the Second Nuclear Age, and the recent work of Paul Bracken, who generated the process of a strategic rethink would be a good launch point for reworking U.S. policy in the region with regard to nuclear weapons.

And for a graphic characterization of the evolving “Pentapolar Nuclear Order” in the 2020s as seen by Bracken (graphic credited to Bracken):