Reshaping the War Against Isis: The Coming of the USS America and the Role of Insertion Forces

Donald Trump as candidate has often raised the issue of changing the approach to fighting ISIS.

“I want to be unpredictable.

I don’t want to tell ISIS what I’m going to do to knock the hell out of them.”

“I think we have to be unpredictable,” Trump told CBS News’ John Dickerson in January.

On the one hand, he wants to hit Isis much harder.

The approach suggested by the retired Lt. General Deptula, to have a real air campaign against ISIS is certainly a way which force against the adversary could be ramped up and calibrated.

We need to begin with an aggressive air campaign — where airpower is applied like a thunderstorm, not a drizzle; 24/7 constant over-watch, with force used against every move of IS forces and personnel.

We’ve done this before — Desert Storm where the opening 24 hours witnessed over 2.500 aircraft missions focused on a simultaneous attack across the breadth and depth of the entire country of Iraq—an attack from which Saddam Hussein’s forces never recovered.

IS won’t require that level of effort.

On the other hand, it is not airpower versus boots on the ground.  It is about changing the nature of the ground forces used and how air-ground integration to kill the enemy is conducted.

It is not about putting bases on the ground that ISIS can strike as they can.

The recent attack on Bagram reminds us of the inevitable problem of the land base in contested territory.

Four Americans were killed in an apparent suicide bomb attack early Saturday at Bagram Airfield, the largest US base in Afghanistan, US Defense Secretary Ash Carter said.

Two of those killed were service members, and two were contractors, he said, adding he was “deeply saddened” by the news.

The explosion also wounded 16 other US service members and one Polish soldier participating in the NATO mission, Carter said in a statement.

The Taliban claimed responsibility in a tweet praising the “strong attack” on Bagram Airfield.

This kill and tweet approach of our terrorist opponents becomes a lot more difficult if you can not find the Americans until they descend upon you with intent to kill.

Forces can be moved around the point of attack to enhance unpredictability while reducing the vulnerability of needed ground forces by relying on insertion forces, leveraging the sea base.

As Ed Timperlake and myself wrote in 2014, the new capabilities which the amphibious task forces coupled with large deck carriers provides a variable attack force which can insert ground forces against areas of interest and then withdraw back to the sea base.

ISIS is a rapidly moving target and needs a response that is not measured in the months and years of a return of the US Army to Iraq to re-start training an Iraqi Army which the Obama Administration has already clearly recognized as part of the problem not the solution. The total collapse of the Iraq Army after a decade of US investment is a testimony to failure, regardless of who is at fault in US planning and execution of Iraq Nation Building.

For defenders of COIN, it would have to be explained why time and continued effort would overcome what are clearly deeply rooted fissures within the political texture of Iraq: namely the Sunni-Shite cleavage, the role of Iran and the use of the military by Prime Minister Malki for his own political purposes?

In effect, Maliki has used his Shia-dominated military in ways similar to how Saddam Hussein used his Sunni-dominated military, namely to prop himself up in power and to shape domestic political outcomes to his benefit. Simply changing the name of the leader is not likely to change power realities.

And when the ISIS were able to aggregate forces, the absence of an air enabled ground force, demonstrated a fundamental fact often forgotten: it is not about airpower versus boots on the ground….

If the ISIS forces loses their maneuver ability and their crew-served weapons and armored vehicles, especially tanks, to seize terrain and key choke points, they will be forced back into the cities or be forced hide in small units in the countryside.

If US forces can see them outside of cities they can kill them. City fights should be left to what is remaining of the Iraq Army.

ISIS was well on the way to fielding an Army when the US finally engaged.

Focusing upon what is needed to pulverize military capabilities of ISIS to move rapidly and lethally, can buy some strategic maneuver space to sort out what kind of aid the Kurds might really need to protect their augmented territory within a fragmenting Iraq.

Because the US has the option of leveraging our seabase in conjunction with whatever force capabilities might be shaped to support the Kurds, the US is NOT forced to have agreements with a collapsing regime to influence events. The sea-based force can function as the foundation for a force able to operate without the need for specific territorial agreements on basing with fractious factions of Baghdad.

And when they depart, they do not have to leave their equipment behind which can become later seized by hostile forces and used against the United States and its allies.

As Ed Timperlake highlighted in an article published in 2010, operating from sea bases can allow you both to do power projection and to withdraw when the mission is accomplished.  It is about setting objectives and then implementing them with flexible sea base insertion forces.

And such a force allows alignment with evolving strategic objectives.

Bottom line:  what can go in from the Sea with a Navy/Marine AF team can also be withdrawn. Allies to whom we owe a debt can be evacuated or protected from the sea.

These possibilities remain important for our current global commitments and operations.  And with the 21st century con-ops provided by the MV-22, the Harrier and then the F-35B, the Marines can engage in providing capabilities for such situations.

Off the shores of San Diego right now a new powerful capability is being worked which can augment the insertion force and give it a whole new punch, pack and ability to insert and withdraw force.

The USS America with F-35Bs and Ospreys can provide for force insertion and provide the kind of unpredictability in approach but success in operations, which President-elect Trump has highlighted as a key part of the tool box to defeat ISIS.

The USS America is the largest amphibious ship ever built by the United States.

The ship has been built at the Huntington Ingalls shipyard in Pascagoula, Mississippi and departed mid-July 2014 for its trip to its initial home part at San Diego, California and then was commissioned in San Francisco in mid-October 2014. It is now undergoing its final trials and preparing to enter the fleet.

The USMC is the only tiltrotar-enabled assault force in the world.

The USS America has been built to facilitate this capability and will be augmented as the F-35B is added to the Ospreys, and helicopters already operating from the ship and as unmanned vehicles become a regular operational element as well.

The Osprey has obviously been a game changer, where today, the basic three ship formation used by the Amphibious Ready Group-Marine Expeditionary Unit can “disaggregate” and operate over a three-ship distributed 1,000-mile operational area. Having the communications and ISR to operate over a greater area, and to have sustainment for a disaggregated fleet is a major challenge facing the future of the USN-USMC team.

With the coming of the F-35B to the USS America, the tiltrotar-enabled force adds significant capability. This can work a couple of different ways.

The ship can hold more than 20 F-35Bs, but more likely when F-35Bs are being featured would have a 16 F-35B flying with 4 Osprey combinations. The Ospreys would be used to carry fuel and or weapons, so that the F-35B can move to the mission and operate in a distributed base. This is what the Marines refer to as shaping distributed STOVL ops for the F-35B within which a sea base is a key lily pad from which the plane could operate or could move from. 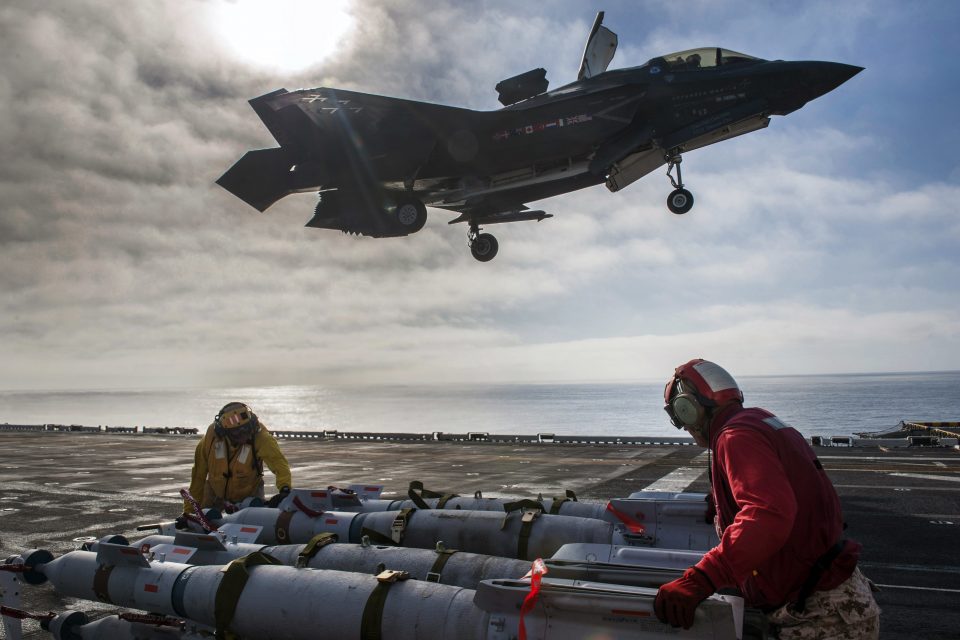 The F-35B aboard the USS America with a ship optimized for ground force insertion support.
This training is going on right now off of San Diego. Credit: USN

Alternatively, the F-35B could operate as the ISR, C2 and strike asset to work with the rest of the assault force. The beauty of the F-35B for the Marines is that it allows them to operate off of an amphibious ship with a plane which can do C2 or provide forward leaning ISR.

In other words, the F-35 working with an Osprey-enabled insertion force operating off of the USS American could well re-define the meaning of Close Air Support (CAS).

Ed Timperlake and myself  highlighted an opportunity not taken by the current Administration when it came to the possibility of saving the Christians from ISIS.

The USMC can easily setup a TEMPORARY FOB for 22nd MEU with their MV-22s somewhere in Kurdistan to conduct missions into Iraq proper to rescue Christians and eliminate any ISIS fanatics in the way in the process and then leave.

The French in Mali underscored the point that it was not about COIN; it was about eliminating concentrated forces of the adversary, purusing as possible and then leaving.

This is not about long term occupation and training; this is about the only tiltrotar enabled assault force coming to the aid of the Kurds and Christians, setting up a forward operating base that can influence events in the Nineveh plain, helping move threatened minorities to Kurdish protection, working with those SOF in country, and returning aboard ship.

The U.S. has insertion forces able to engage and withdraw, rather than setting up long-term facilities and providing advisers as targets.

Put bluntly, the new President has means to change how the battle is fought which need not repeat the mistakes of the last decade of land wars.

Insertion forces are a key tool set and with the changes in how amphibious task forces operate and with the coming of a whole new capability associated with the USS America, the sea base is adding to its capability for the insertion of force into a vector of assault, destroy and withdraw.

Changing the nature of the force being used against ISIS and reshaping the operational compass against a mobile force which likes to pop up across the region can meet its match – there is no place you can hide that we can not come and find you and kill you.

The new President clearly has the intent; and with some creative rethinking and combat innovation has the means.