Hamilton, Pence and the Return to Core Values

As an undergraduate, I studied under a noted scholar of the Constitutional period of the United States and wrote my undergraduate thesis on a key topic in the period of building the new nation. We spent a great deal of time studying Hamilton for this was one of the key founders that my professor had focused upon in his studies.

Then as a graduate student I went to the same university as did Alexander Hamilton.

Among the earliest students and trustees of King’s College were John Jay, the first chief justice of the United States; Alexander Hamilton, the first secretary of the treasury; Gouverneur Morris, the author of the final draft of the U.S. Constitution; and Robert R. Livingston, a member of the five-man committee that drafted the Declaration of Independence.

The college reopened in 1784 with a new name—Columbia—that embodied the patriotic fervor that had inspired the nation’s quest for independence.

The founding fathers were a querulous lot but deeply dedicated to one mission—the birth of a new nation.

The election of Donald Trump recalls the heady days of the debates about the new nation and its strategic direction – in fact, focusing on what the core values going forward to a country, which has been saddled with political correctness, and the church litany of the current generation of enforced values is clearly a positive outcome of his election.

What we don’t need is booing replacing debate; and pontificating assertions by an actor of his personal values for universal ones.

But that is what we got recently in of all places Broadway.

I went to school on Broadway but further North.

And I often went to plays to get out of the university life of contested debates and values being shaped in the post 1968 world, but a period which which was very invigorating.

America had not yet settled into the political correct, global commons, globalization and apologia world of Barrack Obama.

I am sure the Vice-President elect, Mike Pence, went to see a Broadway play in the same spirit in which I did so during my graduate school years.

But his right to enjoy a play as a theatergoer turned into spotlight on him and the concerns, which the cast of Broadway apparently have.

Not only was the Vice President elect booed by some members of the audience but cast member Brandon Dixon took it on himself to lecture the newly elected official in these terms:

“We sir, we are the diverse America who are alarmed and anxious that your new administration will not protect us, our planet, our children, our parents or defend us and uphold our inalienable rights, sir.”

Some audience members took to twitter to report that the show was paused several times as the crowd booed Pence at certain lines of the show.

Cast member Brandon Dixon delivered the statement on behalf of the cast encouraging the audience to tweet and record the message.

Dixon added, “We truly hope this show has inspired you to uphold our American values and work on behalf of all of us.”

Dixon continued to say the show was “told by a diverse group of men, women of different colors, creeds and orientations.”

The remarks were met with cheers from the audience in response.

Dixon’s curtain-call speech ended with a plea to donate to Broadway Cares/Equity Fights AIDS.Lead producer Jeffrey Seller said he hopes Pence would share the show’s message of empathy saying, “I hope that maybe it inspires him to feel for those not like him.”

Dixon I would point out that you are not the diverse America; you are part of America in which many people simply do not agree with you.  You do not embody the will of the people, something Hamilton understood all to well about the political processs.

You can act in a play; but in no way do you understand Alexander Hamilton nor the values he represented.

I would faint if this cast knows anything about Pence and his values.

But let us put this into perspective.

Can you imagine Vice President Biden attending the show and Brandon Dixon saying something like:

“We are deeply concerned about the weakness of America and the many people who are out of work.

We are concerned with how the Midwest has become an industrial wasteland.

We are concerned with peace and security in the Middle East and the weakness being shown at home.

We are concerned with what illegal immigrant criminals are doing to sully the reputation of hard working Americans.

We are concerned with the repeated lying which members of your Administration have done and the failure to close the gap between those who work and those who take in America.”

To write such words is to simply make the point.

What this boils down to is that Brandon Dixon has an interpretation of what he thinks are American values.

But he then believes that those are universal values which are being threatened by a new Administration which is only now preparing to take power and to put in place its key officials.

What he has presented is an intellectual selfie!

Leaving aside the inappropriateness of behavior, Brandon Dixon does not represent America.

I am not a fan of either Biden or Obama but if either were attending a play where I was also attending, I would NEVER boo them, but would applaud them out of response for their office and their service.

Apparently, my core values are out of date to many in the audience, but we can always work to bring those values back into power.

Oh we did and we about to see a new day in Washington.

the play does not in any way reflect really Hamilton’ values or beliefs and substitutes these like it was a Disney story for the projected values of the rainbow liberals.

Sorry that the real world is intruding Brandon!

One can get a sense of the gap in values here from a review published on June 10, 2016 in The New York Times.

In Hamilton’s tumultuous life, Mr. Miranda saw the drive and promise of the immigrant story of America. Already in 1782 the French immigrant Crèvecoeur had defined “the American, this new man” as one who moved to a land in which the “idle may be employed, the useless become useful, and the poor become rich.”

Hamilton announces this entrepreneurial ambition early in the show: “Hey, yo, I’m just like my country/I’m young, scrappy and hungry.”

The night’s biggest applause line, “Immigrants: We get the job done!,” proclaims that, contra Donald J. Trump, immigrants are the source of America’s greatness and renewal, not its decline.

Mr. Miranda’s depiction of Hamilton as resourceful immigrant and talented self-made man captures an important aspect of his character.

But the musical avoids an equally pronounced feature of Hamilton’s beliefs: his deeply ingrained elitism, his disdain for the lower classes and his fear of democratic politics.

The musical’s misleading portrayal of Hamilton as a “scrappy and hungry” man of the people obscures his loathing of the egalitarian tendencies of the revolutionary era in which he lived.

Hamilton mistrusted the political capacities of the common people and insisted on deference to elites. In a speech delivered at the Constitutional Convention, Hamilton praised the hierarchical principles of the British political system.

He argued, for example, that the new American president and senators should serve for life. Many of the Convention participants feared the “excess of democracy,” but Hamilton went much further.

He wanted to bring an elective monarchy and restore non-titled aristocracy to America. “The people are turbulent and changing,” he declared.

hey must be ruled by “landholders, merchants and men of the learned professions,” whose experience and wisdom “travel beyond the circle” of their neighbors.

For America to become an enduring republic, Hamilton argued, it had to insulate rulers and the economy as much as possible from the jealous multitude.

But not to worry — with the magic of Broadway, Hamilton is an immigrant supporting the rainbow coalition!

Editor’s Note: A persistent myth being generated by the left is that extremists were behind the election of the new President.

While the global media focuses on the protestors, the emergence of new approach validated by the US voters is not.

Recently, Eric Bolling of Fox News provided a history lesson to Geraldo Rivera on the nature of the demographic vote for Trump versus Romney in 2012. 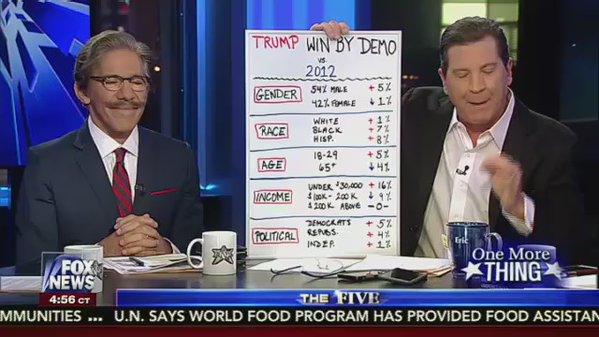 He pointed out that on gender, Trump was up with the males by 5 percent but only down with women by 1 percent.

On race, Trump was up with whites by 1 percent, but his increase among the black community was up a whopping 7 percent. The Hispanic community also showed a significant rise in voters, with an increase of 8 percent.

With voters 18 to 29 years old Trump saw a 5 percent increase from the Republican tally in 2012. The number of voters 65 and older who voted for Trump was actually down from previous Republican numbers.