Why an Ostrich Policy Won’t Work: It is More Than Just Trump

Lieutenant-General Robert Baden-Powell (1857-1941), the founder of the “Boys Scouts” movement, was a British army officer who had served in India and was a veteran of the second Boar War, one of the less glorious, though ultimately successful, imperial interventions by the British in South Africa.

The young Winston Churchill enhanced his reputation as a result of his imprisonment and escape and miscellaneous adventures during that colonial conflict. Robert Baden-Powell become famous for his defence of Mafeking during a 217 day siege.

He had employed subterfuge he had learnt in India and in Africa against an enemy where the British were outnumbered by seven to one. He became a British national hero as a result.

In 1910 he retired from the army and formed the Boy Scouts association.

He adopted for the boy scouts the motto: “Be Prepared.”

I was a “cub” scout  many years ago. I learnt all sorts of (fairly useless) skills, like the ability to tie various types of knots, how to go “tracking” in the “outback” (there was in fact no “outback” where I grew up), and how to go about pitching tents (which I did when I saved up my pocket money and bought a very small tent for myself which l pitched during the summer months on the front lawn of my parents house.)

But it was all great fun. I enjoyed it all immensely.

Baden-Powell ‘s motto “be prepared” stuck with me.

The international foreign policy elites, who have so unanimously and contemptuously dismissed the thought of a Trump presidency, however, should begin thinking seriously about what a Trump presidency might mean.

Since it could well happen after the November presidential election.

Even though they have, almost unanimously, rejected the thought.

The same “experts” of course also rejected the thought of Brexit, before the British voters decided otherwise. American voters may well also vote for Trump, despite (or in many cases because) of the advise of the “experts.”

In fact, Trump has said he regards the opposition of the foreign policy establishment to him as a “badge of honour.” 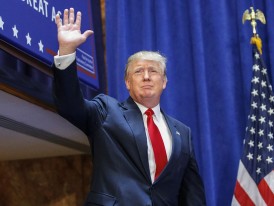 In Britain the more the “experts” warned against Brexit (and they included the British Treasury, the Bank of England, the IMF, and the OECD, as well as Janet Yellen, chair of the Federal Reserve, as well as President Obama), the stronger the support of Brexit became.

Which may well prove to be true as well in the USA about the dire warnings of assorted “experts” about the consequences of a Trump victory in November.

In fact it is high time Baden-Powell’s scout motto was taken seriously again, and some serious thought was given to the real dilemmas a President Trump would face in 2017 and to recognize that several key questions he has raised are clearly part of the period of historical transition which we face, with or without President Trump.

Firstly: It is evident that the world is at a moment undergoing a profound shift of the tectonic plates of the past seventy years, not only Post-WW2, but also post-Cold War.

It is not yet at all clear where, or how, the new world order (or disorder) will crystallise.

But what is clear is that profound shifts are underway, and that many of the the old formulae for dealing with these challenges are in urgent need of reevaluation, especially for the USA, as well as for the “west” more generally.

Russia has shown that a combination of the use of raw hard power ( in Syria and in the Crimea), combined with a skilful use of clandestine, unconventional, indirect “soft-power” and cyber-power, can promote Russian national interests.

China has expanded its ambitions in the South China Sea. North Korea continues with its nuclear ambitions regardless of international condemnation.

The US ambitions to “nation build”  in Iraq and in Afghanistan have both produced dubious results and at very great cost.

Not to mention the continuing disastrous situations in Syria where the US faltered in its red line policy and in Libya where the US “led from behind” letting France and the UK take the lead in removing colonel Gaddafi, but then doing virtually nothing to deal with the consequences of producing a failed state, and a open gateway for tens of thousands of migrants to attempt to cross the Mediterranean into Europe.

Secondly: The consensus which has dominated financial and commercial policy is under challenge, particularly over the merits of free trade and protectionism.

The anti-Nafta and pro-Brexit voters, post-industrialised, previously unionised  industrial workers, who have seen their factories closed, and moved from the old rust belt cities of the upper midwest to  Mexico, while they see undocumented immigrants flood in to the country.

And in the UK similar patterns have taken place over the last two decades in the north and northeast of England and in Scotland where many rightly or wrongly blame uncontrolled European immigration for their problems.

The consequences have been the almost total collapse of the Labour Party in Scotland where deindustrialization has devastated old Labour Party bailiwicks, and seen the  rise of the Scottish nationalists (SNP), and in England the rise of the United Kingdom Independence Party (UKIP) and of Nigel Farage.

In France similar impacts of globalisation and deindustrialization has seen the rise of support for the National Front, and in Germany of the right wing Alternative for Germany party (AfD) and the deep opposition within the CDU and its sister Bavarian CSU to chancellor Angela Merkel’s open door immigration policy.

But the costs for the credibility of the world financial and trade system are now becoming evident.

For the first time since the network of international trade tariff agreements were made on 1948, though the treaty of Rome in 1956, through the establishment of the World Trade Organisation in 1984-94, though the North America free trade area agreement of 1994, there is now major opposition to the US-EU trade deal, as well as to the Transpacific partnership been to US, Japan and 10 other pacific nations, which is opposed by both Trump and (now) by Hilary Clinton.

Fourth: domestic tranquility is now seen as under threat by substantial segments of the population, and this treat is linked to the question of immigration and to citizenship to disenchanted voters throughout the west.

But it has been enhanced since the threat Islamic terrorism has been manifested on the streets of Paris, Nice, and in Belgium and in Germany.

It is true that Europe there have long been complaints about the “democratic deficit” of EU institutions.

People were bemoaning the “democratic deficit” as long ago as a meeting I attended on Berlin two months before the Berlin Wall came down, and long before the EU expanded to incorporate what was then communist dominated nations of Eastern Europe.

The concern at the time was to incorporate post dictatorship Spain, Portugal and Greece into the European community.

But the problems have only become worse since.

It is never a good idea to underestimate your opponents.

Much less to insult them.

But this is precisely what the Labour Party did in Scotland in the run up to the independence referendum where although the unionists won the day, the voter turn out was one of highest on British electoral history.

And the three leaders of the Westminster political parties who signed a pledge to give Scotland more powers (Cameron, Clegg, Miliband) in the run up to the vote have all been deposed since.

The referendum on Brexit also produced a similar high level of voter participation. And the result also cofounded the experts, even those who had campaigned for exit from the European Union, who had not prepared at all for the success of the exit result.

Even Nigel Farage, who had campaigned for over 20 years for Britain to leave the EU, was surprised by the result.  It was in fact “a very British coup” which brought Theresa May in as prime minister (although she bad been an anti-brexiter), and three leading bexiters (Boris Johnson, Liam Fox and David Davies, but not Michael Gove who had attempted to stab his old friend Boris on the back during his own leadership attempt and had been defenestrated when he failed) into the cabinet charged with making “Brexit” work.

The problem with Brexit was those you led the campaign to exit the European community never planned for what a victory would actually mean.

But what is already abundantly clear is that the “under decided” had decided to vote.

And that these alienated, but now mobilised and galvanised, “disreputables,” made their views very clear indeed on the day.

The old political and economic establishments are at loss to explain the rise of Trump.

They bemoan how he “refuses to be educated.”

But he may well know the key problems to address for the new strategic environment; he may not want to be educated on how to repeat the past.

In any case, it is hard to be a strategic elite guiding the future of your society with your Ostrich head in the sand.

How would they deal with the widespread discontent and disconnection between the political elites and the population?

The America presidential election may well confirm the trend.

It is high time, as Baden-Powell advised, to “be prepared.”

Dr. Kenneth Maxwell is a regular contributor to Second Line of Defense and now has returned to live in the United Kingdom after living and working for many years in the United States.

Kenneth Maxwell was the founding Director of the Brazil Studies Program at Harvard University’s David Rockefeller Center for Latin American Studies (DRCLAS) (2006-2008) and a Visiting Professor in Harvard’s Department of History (2004-2008).

From 1989 to 2004 he was Director of the Latin America Program at the Council on Foreign Relations, and in 1995 became the first holder of the Nelson and David Rockefeller Chair in Inter-American Studies. He served as Vice President and Director of Studies of the Council in 1996. Maxwell previously taught at Yale, Princeton, Columbia, and the University of Kansas.

He founded and was Director of the Camões Center for the Portuguese-speaking World at Columbia and was the Program Director of the Tinker Foundation, Inc. From 1993 to 2004, he was the Western Hemisphere book reviewer for Foreign Affairs. He has been a regular contributor to the New York Review of Books and is a weekly columnist since 2007 for Folha de São Paulo.

Maxwell was the Herodotus Fellow at the Institute for Advanced Study, Princeton, and a Guggenheim Fellow. He served on the Board of Directors of The Tinker Foundation, Inc., and the Consultative Council of the Luso-American Foundation. He is also a member of the Advisory Boards of the Brazil Foundation and Human Rights Watch/Americas. Maxwell received his B.A. and M.A. from St. John’s College, Cambridge University, and his M.A. and Ph.D. from Princeton University.

This is the latests in our series on the Second Line of Defense Forum, which is looking at the coming Administration, its approach and its impact.