Disrupters, Stratos Elites, and the Fate of the Republic: The 68 Generation and the Presidential Election

America is now marking the 50th Anniversary of one of the most beloved and enduring series ever created, Star Trek.

It is only fair to say to the Gen Xrs and Millennials that Star Trek knowledge and minutia is one of the central motifs in the hugely popular TV show “The Big Bang Theory.”

Personally, being at the US Naval Academy when the show premiered, it was pleasant to see that the Navy would rule space.

After all it is the Star Ship Enterprise, and Captain Kirk, and First Office Spock, a rank that is more a tribute to Royal Navy, who reported to Admirals running Fleet Command.

We all thought that was about right.

The launch of Star Trek was balancing out, because one of the greatest science fiction writers in history, named “The Dean of Science Fiction Writers, ” was Robert Heinlein, USNA Class of 1929, and he created “Star Ship Troopers” definitely an Army term. 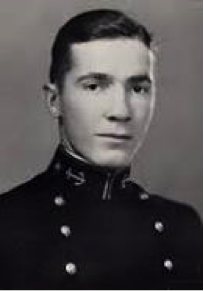 It was a real complement to the Sea Services that the creator of Star Trek was Gene Roddenberry a highly decorated US Army Air Corps WWII combat pilot in the 394th Bombardment Squadron who was awarded a Distinguished Flying Cross.

However, his complement to the Sea Service did not begin with Star Trek.

Gene Roddenberry created a TV series called “The Lieutenant ” about a Marine Infantry Platoon Commander, which went off air in April of 1964.

It would take many years to see the honor of a Marine Officer being celebrated again on TV as the great “Boomer” generational rift was just beginning over Vietnam. 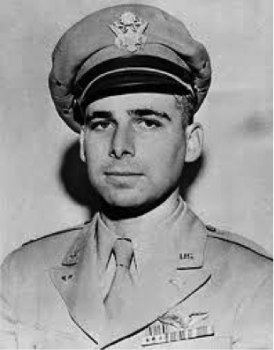 And sadly less than one third are alive today.

It was during this time that the peer smugness and moral superiority of those not serving began to capture the public debate.

Their morally superior hollow platitudes were greatly aided by many in the main stream media.

Blaming the warrior for the war and painting all in uniform as “Baby Killers” was very real and very ugly.

It was no wonder that it took a Science Fiction series — Star Trek — to capture issues of individuals in uniform being brave and true and the plots were very welcome during some very dark generational years.

To be fair, most of the actual disdain and generational hatred came from the left; but there was the odd case of Mitt Romney.

He comes to mind as perhaps one of the strangest students to come of age during the Sixties. Romney, took a religious exemption to avoid being drafted by going to France as a Mormon Missionary all the while strongly supporting the war in public.

Gee thanks a lot Willard!

We really appreciated your having our back.

But in today’s Political Season which is the last hurrah of the Boomers, is one episode of Star Trek resonating down from almost five decades ago.

The episode is current today and could have been “Ripped From The Headlines” right now, it is the Star Trek Episode called “The Cloud Minders”: 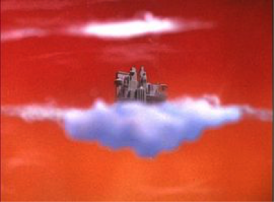 The floating city of Stratos where the elite city-dwellers live.

Once on the floating city, Kirk and Spock are entertained as guests until the zenite can be procured from the mines.

They learn that the people of Ardana are divided between the labor-class Troglytes, who work hard in the dangerous mines, while the elite city-dwellers reap all the profits and live in luxury.

A group of Troglytes, termed Disruptors by the Stratos dwellers, are rebelling against the elites.

This episode has some important points for the 2016 Election.

First, there are very elite city dwellers who live in a 21st Century version of Stratos, whether it be the $ 10 Million dollar Apartment like the one owned by her daughter that Secretary Clinton ran to hide out in after her collapse, or in the Hamptons where she goes to raise money or Beverly Hills and Aspin, Jackson Hole or Silicon Valley the Cloud Minders in America have it very good.

Before the reader says —  wait a minute Donald Trump lives in Stratos — it can be pointed out he that actually very successfully mixed it up in the building/development trades, in NYC of all places, to build many Stratos and good on him.

It is what the residents do and say in Stratos that is the issue.

Second, and very thoughtlessly the current people of Ardena make a direct attack, on Americans that they see as today’s Troglytes.

“We’re going to put a lot of coal miners and coal companies out of business.” Hillary Rodham Clinton.

Do not forget President Obama’s, the current surrogate candidate for the ill Secretary, very nasty words:

“You go into these small towns in Pennsylvania and, like a lot of small towns in the Midwest, the jobs have been gone now for 25 years and nothing’s replaced them.

And it’s not surprising then they get bitter, they cling to guns or religion or antipathy toward people who aren’t like them or anti-immigrant sentiment or anti-trade sentiment as a way to explain their frustration.”

Finally, like the moral posturing of the very nasty left in the sixties the direct attack has begun again by another rapidly aging boomer Hillary Rodham Clinton:

“I know there are only 60 days left to make our case — and don’t get complacent, don’t see the latest outrageous, offensive, inappropriate comment and think well he’s done this time.

We are living in a volatile political environment.”

“You know, to just be grossly generalistic, you could put half of Trump’s supporters into what I call the basket of deplorables. Right? [Laughter/applause]. The racist, sexist, homophobic, xenophobic, Islamophobic — you name it. And unfortunately there are people like that. And he has lifted them up.

“He has given voice to their websites that used to only have 11,000 people, now have 11 million. He tweets and retweets offensive, hateful, mean-spirited rhetoric. Now some of those folks, they are irredeemable, but thankfully they are not America.

Right on cue a Cloud Dweller Jeff Bezos, who literally made his multi-billions on the cloud, echo chambers Clinton’s very nasty words through a writer in a blog he bought with balance sheet “round-off” that was a paper once known as The Washington Post:

Well bucko, they are not racists they are “disruptors.”

I was not a Baby Killer in the sixties and will not fall into the trap of saying “I am not..” that kind of protest gives credibility to what you have said.

Rather it is fair to say you sir are the raciest by the headline alone.

As far as “Baby Killing” before I got very sick very early in my tour, I was an F-4 pilot in a Marine Task Force bombing the Khmer Rouge, who actually were horrific baby killers.

My only regret is I did not do enough to stop the Killing Fields and I actually applauded the Vietnamese Army for finally destroying the Khmer Rouge and was happy to help assist in rebuilding Elementary Schools in Vietnam in honor of my friend the late Lewis Puller Jr:

Now seeing the exact same pattern and practice in words used by Hillary Clinton because she and Bill were leaders in the sixties using words to tear apart very decent Vietnam Warriors, and right on cue her media sycophants echo-chamber her nasty accusations.

It is time to go to the source and say enough is enough.

No sense blaming Milbank he is just another blogger in the Cloud employed by Jeff Bezos who is truly the personification of a leading citizen of Stratos.

So Jeff have a sense of historical decency—if I use the magic word Please would it help?

Ronald Reagan said “The Future Does not belong to the faint hearted.”

After acknowledging the great Robert Heinlein USNA 29 in my  article, the very next day it is announced that Jeff Bezos gets an award named after him.

It is worthy to dream and put one’s own money up for a vision and  it actually looks like he is building a space transportation system to actually build and live in “Stratos.”

One bit of advice “Starman:”

Make sure your ejection seat works for it  may save your life when things don’t work out!

“I think NASA should work on a space-rated nuclear reactor.

If you had a nuclear reactor in space– especially if you want to go anywhere beyond Mars, you really need nuclear power.”

Before you develop the “Chernobyl” or “Three Mile Island” launch vehicle, a little history is in order.

When a nuclear reactor was proposed to power space vehicles in the fifties people got a little worried about spreading radioactive material around the globe in the event of an accident.

Global Warming would pale in comparison to global nuclear pollution in a reactor incident on launch.

Maybe  converting The Washington Post into a personal blog, and not launching highly radioactive  material over our heads is a better idea. 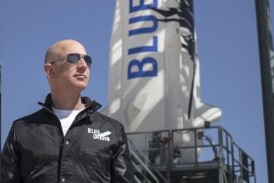 Although your  posed visionary picture is a perfect symbolic merging of controlling the Wash Post and your image.

Turning the WashPost into a Blog is  actually safer to America because the recent Gallop Poll tells us that no one, or 7 out of 10 to be fair, believes the Press.

All that is missing is a link to a press pack for the marketing of Blue Origin!

For his achievements, Bezos, the founder of amazon.com and the owner of The Washington Post, was awarded the prestigious Heinlein Prize Wednesday evening at an event at the Smithsonian National Air and Space Museum.

Editor’s Note: We initially raised our concerns about the Post as a blog when the Post Editorial Board  “interviewed” Trump last March.

We simply listed the questions they asked and posed the challenge: Is this a great national newspaper or an assertional blog?

“One does not even have to like Trump to understand the importance of something akin the recovery of real journalism as crucial to the future.

For that I can go to church.”

One response to “Disrupters, Stratos Elites, and the Fate of the Republic: The 68 Generation and the Presidential Election”