Global Reactions to Russia in Syria

By The SLD Team

We argued in setting up the Forum on The Gathering Storm, that the interactivity of crises is a key dynamic facing the democracies.

In writing about Syria, an initial reaction has come from Vietnam, a country not directly involved in Syria but which can sense the global reverberations.

Information War and the gathering storm are now interconnected and operating at light speed.

At 1100 on Friday October 17, 2015 Breaking Defense published our fact based insights on the Russian role in Syria.

It was 1900 Moscow time and the new Russian global public global information site Sputnik International immediately advanced the story from their perspective.

What was very interesting is the Peoples Republic of Vietnam within a few more hours came out with their insights.

It looks like the issue of U.S. arbitrary declaration of “no fly zones” without any consideration of international law is of significant concern for the precedents being set. What if the Peoples Liberation Air Force declared a combat enforced “no-fly zone” over Vietnam or Taiwan?

Or put in other terms, our piece on “how to deal with the Chinese island building campaign” is linked in the Vietnamese mind with our piece on Russia in Syria.

Also more than a few very smart global airpower leaders will begin to embrace and react to point made many years ago the Forum on June 10, 2011:

In an additional piece published by the Vietnamese on the Russia in Syria piece, the photo used actually was that of an F-35!

Some of the points raised in this second Vietnamese piece (as translated with the aid of Google translate):

US strategy has proven to be fragmented, confusing, opaque and inefficient . Two analysts Robbin Laird and Ed Timperlake wrote : ” Compared with Russia’s strategy in Syria , the US strategy is not clear and the use of US military strategy to support discrete fragmentation has revealed many disadvantages . There are obvious limitations in the use of UAV technology….

Laird and Timperlake also pointed out that the West had violated the UN Charter: “(President) Putin is supporting an existing government, the government of Assad. Everyone should remember that priority in the UN Charter is to support the legitimate government and that Russia considered the West’s air strikes in Syria as illegal under the UN Charter….

And lest we forget how well the Obama Administration reset with Russia is working and as the architect of that policy is the Democratic front-runner: 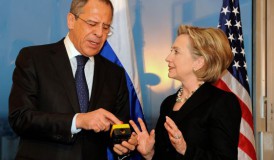 Russian Foreign Minister Sergey Lavrov wants people to stop asking him about the failed “reset” with Russia because he says “it was the invention of Hillary Clinton and Obama administration.”

Mrs. Clinton presented Mr. Lavrov with a “reset” button in 2009 that erroneously had the word “overcharged” written on it. The gesture was meant to symbolize a new day of diplomacy between the new nations.

Since the introduction of the “reset” button, Russia has gone on to annex Crimea, helped foment unrest in eastern Ukraine, and challenged NATO member states with provocative military actions. On May 30, for instance, a Russian Su-24 aircraft streaked by the guided-missile destroyer USS Ross in the Black Sea. The jet was roughly 1,600 feet from the side of U.S. Navy destroyer at an altitude of 600 feet.