Friendship the PRC Way: My Ultimatum is in Your Strategic Interest

Rarely do you see a foreign policy statement from a major power so clearly show its underlying thinking than the recent warning sent by the PRC to Australia.

When Australia objected to the PRC’s unilateral out of the air Air Defense Identification Zone, the Aussies were warned that such an action was a threat to their own interests as unilaterally asserted by Beijing. 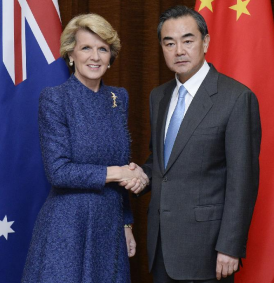 The recent remarks made by the Australian side on the East China Sea ADIZ undermined the mutual trust and cast shadow on the healthy development of the bilateral ties, said Foreign Minister Wang Yi, who co-chaired the first China-Australia diplomatic and strategic dialogue with visiting Australian Foreign Minister Julie Bishop.

China was strongly dissatisfied with the remarks, said Wang, adding that both China and Australia would not like to see the current situation.

Wang said the most important experience accumulated in the past several decades on the China-Australia ties is to respect and accommodate each other’s core interests and major concerns and nurture mutual trust.

“This is the basis of bilateral strategic partnership, and the prerequisite of cooperation in various sectors, “he said.

Bishop expressed concern over China’s establishment of ADIZ in a statement on Tuesday, questioning “the timing and the manner of China’s announcement” in light of current regional tensions.

Stressing that China-Australia relations “are in the key period,” Wang said China hopes the Australian side can properly handle sensitive issues from a strategic and long-term perspective.

He urged the Australian side to increase mutual trust and expand substantial cooperation so as to ensure the right direction of the China-Australia strategic partnership.

In other words, it would be a better idea of Bishop would clear her comments on PRC actions with Beijing before making them.

That would ensure that she was “going in the right direction.”