In the next step in the PRC working to bring more closer together the interests of the two greatest maritime powers of the 20th century, the PRC has unilaterally announced an expansion of the air defense zone.

According to a Japan Times article:

The (Japanese) government branded as “very dangerous” China’s announcement Saturday that it has set up an East China Sea air defense identification zone that includes the Japan-held Senkaku Islands. 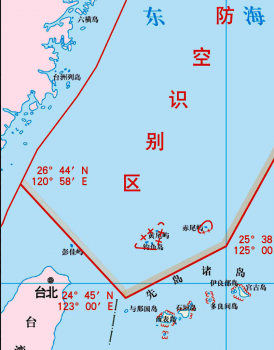 Map released by the Chinese press outlining the new air defense zone being asserted by the PRC. Credit: Xinhua

The Chinese Defence Ministry said the zone was created to “guard against potential air threats,” but the move will only inflame a bitter sovereignty row over the islets, which China claims as Diaoyu.

(The new zone) covers a wide area of the East China Sea between South Korea and Taiwan, and includes the Senkaku islets…..

Along with the new zone, the Chinese ministry released a set of aircraft identification rules that it says must be followed by all aircraft entering the area, under penalty of intervention by China’s military.

Aircraft are now expected to provide their flight path, clearly mark their nationality and maintain two-way radio communication in order to “respond in a timely and accurate manner to identification inquiries” from Chinese authorities….