Syria, Chemical Weapons and the Collapse of Deterrence

President Obama has declared the Syrian preparation for possible use of chemical weapons a “red line” and the NATO alliance has responded also along these lines.

A “red line” should mean something when it has been crossed and if you declare a “red line” to someone you better have a clear view of what your options are to change the situation when the “red line” is crossed.

Having spent many years looking at chemical weapons in the context of the East-West military confrontation, I really doubt whether NATO officials and the US have many good options.

The French for one still exercise with chemical weapons in mind but how about other NATO militaries? 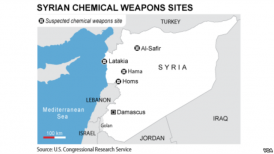 Are our politicians ready for the persistence necessary to deal with the consequences of chemical weapons use?

And if the “red line: is simply ignored, which is highly likely, the impact on the region is immediate and significant.  Without restoring deterrence, for that is what would have to be done to deal with the Syrians and chemical use, Iran will be emboldened and any negotiations with Iran are really only with ourselves.

In the Middle East, with the Benghazi attacks, the Iranian progress towards nuclear weapons, the proliferation of missiles in Gaza and recent Israeli actions, what constitutes deterrence is a highly interactive process.  It also needs to be closely correlated with realistic and definite military actions, which could be taken to deter Syrian use of chemical weapons.

Can the US restore deterrence of WMD in the Middle East, once Syria uses chemical weapons either internally or externally?

This matters in two ways.  If chemical strikes were to be generated from Syrian territory against Turkey or Israel it is certainly plausible to talk about defensive options.  NATO is deploying Patriots to Turkey to deter the effects of a strike and Israel would without hesitation strike Syria with various assets.

But what actions could the US military take to restore deterrence?

Once chemical weapons have been used a threshold is crossed, and the credibility of the words of American and Western leaders challenged.

It is then a question of the restoration of deterrence particularly with the Iranians and others looking on?

“We think it is important to prepare for all scenarios,” Mr. Carney, the White House press spokesman has said. “Contingency planning is the responsible thing to do.”

Interesting choice of words, but what options does the US and Western powers have available?

The challenge is that when chemical weapons are used, notably in any effective operations against Syrian rebels, the only real option may be to invade and overthrow the regime.  As the operation in Libya has shown, loose manpads simply moved out of the country with the absence of ground forces.  Clearly, the same could be the case with regard to Syrian chemical weapons.

In an article by Elaine Grossman published in The National Journal, the author surveyed opinion on what the options might be.

What is clear, though, is that a verified chemical attack by Assad’s forces against rebel fighters, the Syrian people, or neighboring nations could draw Washington into the conflict after months of largely remaining on the sidelines.

The United States has provided humanitarian aid for Syrian opposition forces and displaced civilians, and more recently has begun advising and providing defensive support to neighboring nations Jordan and Turkey.

“The world is watching,” Obama said in a warning to Assad during a Monday speech at National Defense University. “The use of chemical weapons is and would be totally unacceptable. And if you make the tragic mistake of using these weapons, there will be consequences, and you will be held accountable.”

The question remains whether there are any real options short of invading the country to respond to a WMD threat.

President Obama certainly did not like the Bush Administration action towards Iraq but if the same problem pops up in Syria is there a better alternative?