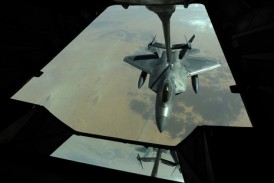 A U.S. Air Force F-22 Raptor is refueled by a 908th Expeditionary Air Refueling Squadron KC-10A Extender, Dec. 6, 2009. The F-22 fighters and crews are deployed from the 27th Fighter Squadron at Langley Air Force Base, Va., and in the Air Forces Central area of responsibility for the first time as part of a multinational exercise where aircrews from France, Jordan, Pakistan, the U.A.E., the U.K., and the U.S. trained together in fighting a large-scale air war. (U.S. Air Force photo by Staff Sgt. Michael B. Keller) (Released)