The BAC1-11 Anticipates the Future: An Interview with General “Dog” Davis

On March 5, 2012, I had a chance to sit down and to discuss Bold Alligator 2012 with the Commanding General of 2nd Marine Air Wing.  The General had organized meetings the Friday before with several of the key actors in the exercise from 2nd MAW.  In later postings, the insights of these Marines will be available to our readers.  We thank the General for making his Wing available and for his time in explaining what he learned from riding on the BAC1-11 on February 6th (D-Day of the exercise) and watching the performance of the F-35 combat systems.

SLD: As you know, last Friday I had a chance to meet with some of your Marines involved in Bold Alligator 2012.  When one goes back to the last big Amphibious exercise in 1996, there was no Osprey.  In this exercise, the Osprey demonstrated (following combat in Iraq, Afghanistan off of the shores of Tripoli) that it clearly has not only stretched the ARG-MEU, but is the critical lynchpin for an ESG-MEB operation.  Col. Boniface, your Osprey commander in the exercise, said that in his view the demonstrated performance of the Osprey along with the coming F-35B, was a virtual tsunami coming to thinking about operations. 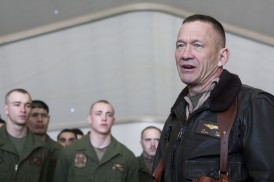 General Davis:  With the Osprey in Bold Alligator, we were able to demonstrate that we could operate at the range and depth of a MEB-sized ESG.  We were able to deploy and basically project power deep in the enemy’s battlespace.  We operated much deeper than we ever did before and this opens up a lot of options for us as far as deep strike capability.  And I think Colonel Boniface has that exactly right.  It is a tsunami of capability.

He is referring not only to the range or the ability to project deep but to do it very quickly.  We are able to come for the sea base and to fly forces deep into the enemy’s battlespace.  And we can do that at 250 or 260 miles per hour.  And we can do that from a sea base that extends out 600-800 miles un-refueled.  This is a fantastic capability.

I think we have just started to scratch the surface.  And the Libyan TRAP mission is a reminder of where we will be able to go operationally.  I think that rescuing that F-15 pilot in Libya, at the speed we did it, the time compression for the decision and the ability to move from that sea base deep into an enemy battle space, pick a guy up and bring him back out is impressive.  We were able to do something no other airplane could do.

SLD: You were on the BAC1-11 where you saw the F-35 combat systems in operation.  The platform is not an integrated sensor suite, but you could see the AESA radar function and the DAS system among others.  How would describe the migration from the Harriers to the F-35s in terms of what these systems can do and will do?

General Davis:  Currently, we put up 16 Harriers off of the USS Kearsarge during the exercise.  You have sensors on each plane with a range of 40-50 miles of scan capability, limited to using one sensor at a time.   And you are not connected to the link (no Link-16).  You function as a node and pass information back via voice or Rover (video down-link).

What I saw on the BAC1-11, I have exponentially greater ability to scan and “see” the battlespace with exponentially greater fidelity than ever before, locating and positively identifying everything from air to sea targets.  I can look at the battlespace with the radar, the DAS, a host of other sensors and basically can bring all that information together into one data system, fuse that information — which makes it a flying sensor.

The V-22 changed things physically with regard to projecting power from a sea base.  With the F-35 we will change things physically again, but on another level we will bring in another huge leap forward in capability from it sensors and its ability to see and share information – from our sea base.

I just witnessed tremendous potential on the BAC1-11 to bring in high fidelity data, not only to know what is out there but also to be able to able to target at a much higher degree of accuracy than I have ever been able to do before.  I almost felt like I was in an E2D, able so see that much battle space.  What was missing for me was there was not another BAC1-11 out there to tie into and to share the sensor data, as we will do with the operational F-35s.

But even as a single platform, it was exponentially better than anything that I have seen in any platform.  And I fly both the F-18s and Harriers now.

SLD: When thinking of the potential of the ESG-MEB operating off of a distributed sea base, the F-35 appears to provide a key match to managing the distributed three dimensional air and surface space within which the ESG-MEB will operate.

General Davis:  It does.  The F-35 community of users – sea based and land based — will be able to create a pretty tight air grid over the top of the distributed battle space so we can share information very freely out there.

To me, the key is to have these airplanes networked overtop, where they’re able to see deep into the enemy battle space, or the objective area, but also sharing that information. I want not just the airplanes to share their information, but the ships as well to be able basically pass that information back and forth freely.

To me that is the next big step we need to take.  We need to take the information, which these planes are bringing to us and sharing them with the ships and other combat elements in the operation.

With regard to the evolution of the ESG-MEB with the introduction of the F-35B, you can disaggregate your forces because you can bring them under an umbrella that has the kind of protection currently only available with the Prowlers or the Growlers off of the large deck carrier.  Now I will have my own organic capability that I can protect these assets.  Now I can spread out, like that tsunami that Colonel Boniface talked about.  I can actually move my forces out and I can protect them.  They can be separated from the ESG, or from the land based assets in our expeditionary Forward operating bases our MWSSs (Marine Wing Support Squadrons) build and sustain.