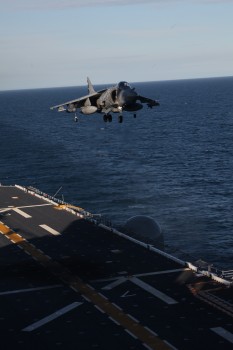 A Marine AV-8B Harrier from Marine Attack Squadron 231 utilizes its vertical landing capability to land aboard the USS Kearsarge Feb. 1 for Exercise Bold Alligator 2012. The Harrier is capable of vertical/short takeoff and landings which are important aboard amphibious assault ships due to the small flight deck and expands the seabasing advantages of the Navy and Marine Corps team.