01/16/2012 We have been working on the re-crafting of the US approach to partnership and security and defense capabilities.  This culminated in our recent Pacific Strategy report.

Now the Chinese have weighed in and are looking at our approach.

The article discusses our analyses of the F-35 purchase by Japan and the focus the Japanese have on combat integration with Aegis weapon systems. The article goes on to say that

The “Aegis” system with a combination of the F-35 will bring a broad prospect, because the F-35 all three types will have this capability. As a result, F-35 fighter jets could be cutting edge combat systems.  Likely, F-35 fighter and the “Aegis” system will be armed with U.S. strategic quadrilateral – South Korea (F-35A to participate in the tender), Singapore (want to buy F-35B), Australia (F-35A) and Japan (F -35A). This not only enables the arsenals drastically allies standardization, but also reduce the risk of U.S. forward forces. America’s allies in the Pacific using the F-35 fighter in the Western alliance can greatly increase the strength of the region.

We might also note that Vietnam has also recognized that America and Allies are building a new warfight vision with emerging technology, especially linking the Aegis and F-35.

And for those who can read Chinese here you go: 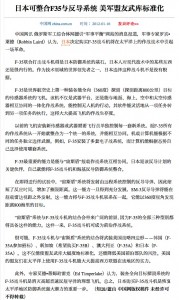