No Sense of Urgency in the U.S. Approach to the Future of Airpower

Later this month we are sponsoring on our Forum a debate about the future of Airpower. We will debate the question  “What does the next 15 years of 21st Century Air Power look like?”

We feel this an urgent question, but to watch the U.S. political class, there seems no real sense of urgency associated with the future of U.S. airpower or of power projection capability as well.  When one sees a serious suggestion that we should keep USN capital ships operating for more than 70 years, you know somebody is smoking something!

Secretary Gates typified this approach by arguing that the U.S. has no peer competitors in the air and that the U.S. would build many 5th generation aircraft before any such animal entered the global arena.

And the evolution of robotic air elements have assured many that the future of airpower is with the unmanned systems and we can watch with equanimity the very slow roll out of 5th generation aircraft.

For these folks, the slowness of the aircraft, and their vulnerability to destruction from the ground and the air are not a real concern.  And even more stunning, the cyber threats were are pouring billions of dollars into coping with, apparently are not a serious problem for UAVs.  In fact, UAVs are a flying cyber target.

But the sense of complacency should be called into question by events too obvious to mention other than these events seem to have no impact on the insular “debate” inside the beltway.

And for the inside the Beltway folks, we are going to be slowly disengaging from Afghanistan at our own pace, the Pakistanis will have to work with us, and we go through debt restructuring by grabbing significant money from the defense budget, because global threats are going to be reduce to what we imagine we can cope with on any given day. 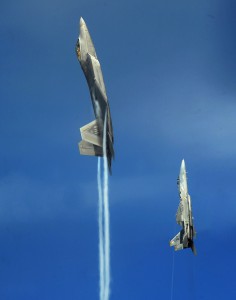 The first wake up call should be the loss by 4th generation U.S. aircraft to more advanced French and European aircraft.  It is very clear from discussions with Indians that the European aircraft were clear winners.

And the reports from the Raptor community of what the F-22 does in killing 4th generation aircraft is not exactly a testament for others to buy them.

Nonetheless, the USAF and USN persist in wishing to buy or upgrade the aircraft that the Indians don’t want.

And even more amazing, the Indian decision is simply not politically relevant in the world of the “US is a superpower” no matter how little capability we draw from investment in the future of power projection.

The second are developments in the Middle East.  President Obama and his mates are celebrating the Arab Spring, and the rise of values based strategy versus old-fashioned realism.  The Arab street is going to bring democracy to the Middle East and over time a real breakthrough in human history.  And we even learned from meetings in Poland that the Arab Spring sprang from the same heritage as the fall of the Berlin Wall.  Doing history whilst tweeting is not recommended.

Whilst this celebration of the human spirit is going on, however, one might note some rather hard headed (please don’t accuse me of realism) challenges are on the table.  Dictators remain; the tweeting and facebook tools allow for the emergence of chaos but have not demonstrated any real ability to create order; and the Iranians are clearly benefiting from developments in the region.

But this second fact for airpower is not the Arab Spring, it is the rise of Arab airpower.  The Arabs have more planes than do the Europeans; the Arabs have modern U.S. and Western aircraft, not old Soviet-style equipment.  And the UAE has better F-16s than does either the US or Israel.  The Egyptians and Pakistanis have F-16s.  And the Administration is in the throes of selling advanced F-15s to the Saudis.

Now let us puzzle over this last development.  Watching President Obama and his presentation of his desires and aspirations would tend to cast a question of how committed he is to the more conservative Arab states, who ironically are his key military allies and key military customers.  This anomaly should be addressed.

But for the Israelis, air superiority is no longer assured.  As a very senior Israeli defense official told me recently in Tel Aviv, “We need 5th generation aircraft now to deal with the growing imbalance and to assure our ability to convince those Arab states which might be tempted towards adventurism, that this would not be a good idea.”

It is clear that the only way this could be done RIGHT now, would be to transfer 20 F-22s to the Israelis as part of deterrence in the region.  Fortunately, the tools and dyes have been preserved so that the U.S. could re-open the line and replace any aircraft, which allies see as necessary.

The Israelis clearly wish the F-35 to be the bedrock of the future fleet, but the Administration’s micro managing of the program is leading to needless delays.

In light of a deterrence gap opened up by the Arab Spring, F-15 and F-16 and Eurofighter sales in the region, the Administration has no choice but to provide F-22s now to the Israelis to forestall any adventurism by Iran and/or any states which end up with Western equipment but not supportive of peace in the region.

Words are not the only way to ensure security in the Middle East.  But surely having NO sense of urgency about the role of airpower in providing for deterrence in the Middle East or elsewhere is not the most sensible policy.