That should get your attention!

Now let us put the argument together.

When President Trump announced that the United States was withdrawing the U.S. from the Paris climate change accord, he did so by reminding folks of those to whom he was responsible:

“I was elected to represent the citizens of Pittsburgh, not Paris.”

“It is time to put Youngstown, Ohio, Detroit, Michigan, and Pittsburgh, Pennsylvania, along with many, many other locations within our great country before Paris, France,” Trump said.

“It is time to make America great again.”

Many Congressman in our nation’s history have served in senior executive Department positions.

But a Congressman and then a DAS at DVA with the nickname “Vinegar Bend” was a most definitely a cut above.

Wilmer David “Vinegar Bend” Mizell, was nicknamed for his place of birth near Vinegar Bend, Alabama, and he was a legionary Major League Pitcher.

Immortalized in Baseball History as a member on the 1960 World Champions Pirates pitching rotation in the season that they made their epic run to the World Series Championship winning against the New York Yankees.

That series culminated with one of the most memorial moments in World History: “The Greatest Homerun Ever: Bill Mazeroski 1960 Walkoff Homerun”

Serving in the Bush Administration with “Vineger Bend” was a very humbling experience.

He was proud to be at the VA because like Ted Williams service in the Marines at the height of his career, Vinegar Bend early in his very successful professional athletic career was called to serve in the United State Army for two years during the Korean War.

Although he did not fight in Korea he often mentioned his Army service experience as a very proud defining moment in his life.

Setting aside the Mayor of Pittsburg’s comments attacking President Trump, all American’s can note that a New York born and raised President reached out to recognize his responsibilities to all Americans and he picked Pittsburg to make his point.

I think Vinegar Bend would have been be very proud for such a recognition.

Of course in Baseball there is also the rest of the story. 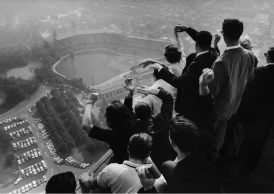 University of Pittsburgh students cheer wildly from atop the school’s Cathedral of Learning as they watch the Pittsburgh Pirates win their first World Series.

The Pirates traded Vinegar Bend to the NY Mets where he finished his career pitching for NY fans who actually liked the Mets over the Yankees.

The trade was not well received among Pirates fans, who appreciated Mizell’s efforts in the run to the 1960 championship, and by his teammates, among whom he was popular because of his good nature and strong religious beliefs.

Ed Timperlake was raised on Staten Island, NY never forgave the Brooklyn Dodgers cheered on the Yankees until most important he switched 1000% to the Washington Nationals.

Contrary to the belief that he was born in Vinegar Bend, Wilmer was born in neighboring Leakesville, Mississippi, and graduated from high school there in 1949, but the little town of fewer than 200 people on the other side of the state line offered a better moniker.1

The town of Vinegar Bend got its name when a train passing through the area careened off the tracks and spilled its load of vinegar there. Mizell was born on August 13, 1930, to Walter David and Addie Turner Mizell, and routinely received his mail in the Washington County, Alabama, town his nickname made famous.

Walter Mizell died when Wilmer was only 2 years old and his mother became sick shortly thereafter, so he was raised by his grandmother and uncle.

Young Wilmer’s throwing motion was so wild that his older brother couldn’t play catch with him. He improved his control by throwing at a knothole in the side of the family’s smokehouse until he knocked the door down. He further refined his skills throwing rocks while hunting squirrels.

The family earned their living as subsistence farmers raising cattle and hogs as well as growing fruits and vegetables. Wilmer also earned money tapping pine trees for turpentine, logging, and hauling hardwood from the swamps along the Escatawpa and Chickasawhay Rivers.

One response to “Baseball and Climate Change?”