From ADIZ to Military Moon Base? Putting a Mushroom Cloud Over Europe?

In a posting by John Aziz, he asks the valid question:

Why does China’s Moon Rover exhibit show a nuclear mushroom cloud over Europe? 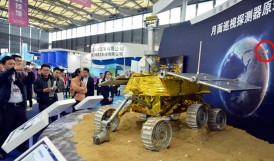 China has made a major diplomatic faux pas by illustrating its Moon Rover exhibit with a stock image of a nuclear mushroom cloud over Europe.

While it’s probably just an embarrassing error, it’s still an unsettling image given the Chinese government’s recent statements concerning plans to build a missile base on the Moon.

On December 3, The Beijing Times reported that Chinese experts are discussing whether the People’s Liberation Army could establish a missile base on the Moon. Per the Taiwan-based, English-language site Want China Times:

An expert from the China National Space Administration’s Lunar Exploration Programme Center told the [Beijing Times]that China plans to send its first astronaut to the moon by 2030. By 2050, the moon could become a base from which to send the country’s manned spacecraft to explore deep space, the source said. [Want China Times]

Innocent enough, right? But the source added that the Moon could be transformed into a deadly weapon. Like the Death Star in Star Wars, the Moon could be used as a military battle station, bristling with ballistic missiles that could be launched against any military target on Earth.

And to recap: first, an ADIZ into the Pacific; then sending peacekeepers for the first time abroad, in this case Mali; and then landing on the Moon and subtly making the point that this is part of an overall strategy towards the other powers.

Not by accident, one would surmise.

Rick Fisher, with the International Assessment and Strategy Center, has worked for many years on the analysis of PRC military trends, has included the possible use of the moon within an overall Chinese approach to 21st century military power.

In one of his briefings on the evolution of the PRC approach he has included this provocative but insightful slide: 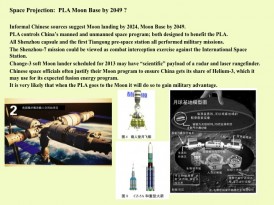 For a look at Fisher’s overall approach to analyzing the PRC and its military evolution see the following: