In fact, Boomer and his Vietnam buddies appreciated John Wayne, who never served, as they went on their great “Asian vacation.”

But they knew the difference between movies and real life, something that is not always the case Inside the Beltway!

The unofficial saying during infantry training getting ready to go to Vietnam was-“don’t pull a John Wayne. “This was shorthand for pulling a glory driven stunt that could get a lot of peopled killed.

But Boomer totally respected that the Duke’s heart was in the right place as opposed to Jane Fonda, whose butt was in the wrong place sitting on an NVA anti-aircraft gun during the war.

But just when Boomer was puzzling over the reaction to Clint Eastwood and his appearance at the Republican National Convention, life seemed to get even more bizarre.  Senator Tom Harken was going to be the Democratic National Committee’s   “response” to Clint Eastwood.

“We’ve got our work cut out for us this week, folks, following the Republican convention,” Harkin told the delegates. “I mean, how are we ever going to match Clint Eastwood? I got to thinking he is the perfect icon for today’s Republican tea party: an old angry white man spewing incoherent nonsense.”

If we go to one of Boomer’s favorite books, Stolen Valor : How the Vietnam Generation Was Robbed of Its Heroes and Its History, you get a solid answer. 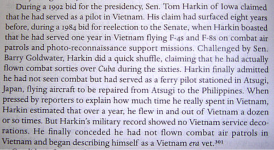 It looks like the only angry white man spewing “incoherent nonsense” is Senator Harkin  who must truly appreciate the recent Supreme Court verdict saying he hadn’t committed any crime in his lying about combat.

Senator Harkin (D-Iowa) meet Senator Blumenthal D-Connecticut-you two have so much in common.

Boomer really likes Clint Eastwood movies; there was an underlying authenticity that just rang so true when he was in a military uniform. Doing some research he found out that Clint Eastwood had served in the US Army during the Korean War.

The luck of the draw had put him in a training unit but the military always has a way of bringing near death experience to all who serve.

“Drafted into the Army during the war in Korea, Eastwood was sent to Ft. Ord in California for basic training. He lucked into a job as a swimming instructor and remained at Ft. Ord. He worked nights and weekends as a bouncer at the NCO club.

On a trip home to Seattle to visit his parents and girlfriend, Eastwood caught a ride aboard a Navy plane at Moffett Field. On the ride back aboard a Navy torpedo bomber, the plane developed engine trouble and was forced to make a water landing off San Francisco. Eastwood was forced to swim over a mile through the tide to shore.”

Anyone fighting for their life in the cold pacific must have developed a firm appreciation that they have ben given the great gift to march to their own drum forever more. So when he addressed the RNC it was very evident he was his own man, and it was the Greatest Piece of Performance Art in American Political History.

Boomer appreciated Lucianne Goldberg and her great web site for hammering home that it was performance art, not the musings of an “old angry white man spewing incoherent nonsense.”

And Boomer appreciates the picture which captured the reality of “leadership from behind.”

Of course, Boomer could not resist adding his own caption: 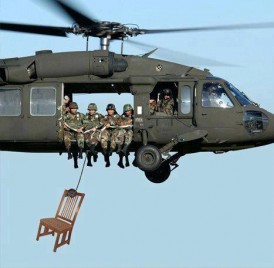 President goes in with SEAL Team 6 on their raid

” In this age of ubiquitous social media — especially YouTube — every observation and attack segment that Clint Eastwood articulated will be proliferated nationwide by his countless fans.  His performance was, at times, filled with nuance and droll asides, but always combined with the underlying principle a direct no BS statement of what it means to be an American citizen.”

Boomer added: “Of course, special thanks goes to former President Bill Clinton for highlighting the RISKS which President Obama took in sending the Seal Team into capture the Bin Laden. Fortunately, one mother of a fallen SEAL corrected the record and reminded Bill Clinton that is different to sit Inside the Beltway than to be in actual combat.”