How to support the USCG in today’s troubled financial environment?

The problem is a classic one Inside the Beltway: the government expands the commitments and reduces the resources. This way politicians can both show their fiscal wizardry but MAKE AMERICA SAFE! Overpromising and underdelivering is a way of life Inside the Beltway. 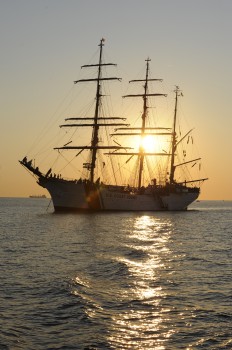 The Office of Management and Budget is an especially keen spot to make sure that the USCG does more with less. OMB is well known to oppose buying TOO many of the new national security cutters and trying like HELL to make sure that those bad boys, the Offshore Patrol Cutters do not get funded at all.

Now one could ask: Can the USCG walk on water? They might have to learn how in order to patrol American shores.

But in an exclusive interview which Boomer has had with an OMB insider, Boomer has discovered the Administration’s secret plan.

Boomer: Where are the Cutters?

OMB Official: These new cutters are simply too expensive to buy and maintain. We have looked carefully at the life cycle costs for the new OPCs and consider these to be cost prohibitive and not in the interests of the Administration or sorry, the American taxpayer.

Boomer: But the USCG has not selected an OPC model yet. How do you do lifecycle costs on a ship not yet selected?

OMB Official: That is part of the change you can believe in. During the Bush Administration, money was spent on too many TROUBLED programs. \

In the Obama Administration, our focus is expanding significantly the oversight bureaucracy on programs, reducing those programs and expanded the per capita number of bureaucrats for procured assets.

We have come up with a much effective management tool: the number of overseers for deployed asset. The NODS gives us a much better handle on getting rid of TROUBLED programs.

Boomer: When they sound general quarters on the NSC at sea, how do they make sure that the NODS are getting ready to secure America?

OMB Official: The overseers are increasingly important to deal with TROUBLED programs. This is the biggest threat to national security.

And we have come up with a plan to buy new cutters at a fraction of the price and we have very good historical life cycle cost data to support our calculations.

Boomer: But this is a old sail ship?

OMB Official: Yes but it will terrify pirates as well who will think it is a ghost ship.