Up in Smoke Inside the Beltway?

The shift from President Clinton to President Obama is dramatic in many ways.  And it could not be clearer than when it comes to smoking.  The current President smokes or used to smoke or his wife says he doesn’t smoke but in any case he likes or liked to hide the fact.  President Clinton boldly smoked cigars and was very proud about it.  And during his Presidency even some of his Generals felt free to smoke Cuban cigars and this led to one famous comment: “I am destroying the enemy’s crops, one cigar at a time.” 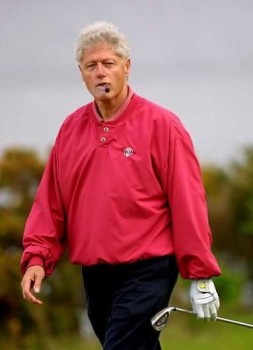 There is an important caveat when thinking about Clinton and cigars however.

Former President Clinton has been forever linked to cigars due to that unfortunate White House incident that had nothing to do with smoking.

A side note: Because the White House was designated as a non-smoking area during the Clinton Administration, the President would more often chew a cigar than smoke one. He still chews cigars when playing golf.

Cigar smokers are mad as hell, and they aren’t going to take it anymore. Faced with an unprecedented assault on their guilty pleasure from President Barack Obama’s Food and Drug Administration, aficionados and industry insiders told The Daily Caller that they’re picking up their torch lighters and revolting.

Usually divided by their preferences for mild, medium and full-bodied smokes, they’re uniting against regulations that threaten to make cigars prohibitively expensive, shut down scores of small cigar shops, jeopardize tens of thousands of jobs and erase the traditionally bright line between Camels and Cohibas.

“Only a couple weeks remain,” one apocalyptic online pitch warns, “to stop the FDA from ruining cigars.” If that seems like a stretch, don’t bother telling Famous Smoke Shop. The e-tailer has sent 1.7 million emails to customers on its mailing lists, asking them to encourage their representatives in Congress to co-sponsor legislation designed to tie the FDA’s hands.

Cigar industry representatives told The DC that efforts like this have already generated more than 113,000 messages to Congress.

It’s no surprise, then, that 125 House members and four senators are on board. They include 26 Democrats, along with six of Congress’ 20 physicians and two of its seven nurses — all strange bedfellows for a pro-tobacco law in the making.

Sen. Mary Landrieu, a Louisiana Democrat, announced Wednesday that she will join them. Landrieu chairs the Senate Committee on Small Business & Entrepreneurship, a crucial position from which to influence an issue that affects mostly mom-and-pop retailers.

And most recently, the “special interests” are in revolt.

Cigar Rights of America (CRA) and the International Premium Cigar & Pipe Retailers Association (IPCPR) have filed a an official petition with The White House asking the Obama Administration to contact the U.S. Food & Drug Administration in support of protecting premium cigars from regulation.

The petition reads as follows:

The FDA is considering the creation of regulations for the premium cigar industry. These regulations will jeopardize over 85,000 American jobs, destroy America’s “mom & pop” premium cigar retailers & manufacturers, and risk over 250,000 jobs in Latin American that produce cigars, impacting the economic/political stability in the region.

We hope you will stand up for small businesses that dot Main Street America & recognize that premium cigars are enjoyed by adults, are not addictive and therefore do not conform to the Congressional intent of the Family Smoking Prevention & Tobacco Control Act.

Tell the FDA to leave our premium cigars alone. With this nation’s more pressing issues, harming my simple ability to enjoy a cigar should not be a priority of the government.

We consulted Boomer to try to understand the “up in smoke” threat to the Obama Administration.

Boomer, in the interests of full disclosure, do you smoke cigars?

“I smoked many things during my time during the Great Asian Vacation, but enjoyed Cigars the most.  My hero was General US Grant and loved the idea that he and Abe would smoke cigars in the White House and in the Willard Bar.  I used to smoke cigars there as well but now you can’t and the only place you can smoke a cigar is a bar frequented by the Secret Service.  And I am damned worried that the problems the Secret Service is having will be used by the FDA to shut that bar down as well.”

We had to pause and reflect.  With “full disclosure” rules you don’t want to interview anyone with experience in the subject they are talking about, because their view is biased by experience.  But I could not find an “interest” free think tank to answer the question so continued with Boomer.

Boomer could you explain why the powerful Cigar lobby or “special interest” is attacking a man above politics?

And in a democracy don’t folks have a right to be represented and their views brought before their Congressmen and other political leaders?

Don’t I have a right to smoke a cigar?

Boomer: “Now that we have health care reform, the answer is no.  Smoking is bad for you.  Because you are killing your body, that process will cost the GOVERNMENT money.  And that high cost of you hurting yourself is not allowable because the SOCIAL SECURITY system wants to reduce the payments out to support the growth of the numbers of folks working for the SOCIAL SECURITY ADMINISTRATION DETERMINING HOW TO reduce the payments going out to the people who overpayed in the first place.”