Remembering Reagan: How to Deter the Russians

As the United States faces a new Administration and with the resurgent Russians reshaping their place in the world, it will be crucial to shape a real policy towards deterrence of Russia.

We have gone way beyond the reset button; and face a significant deterioration not only in our relationship with the Russians, but in dealing with the Russian redesign of Middle Eastern and European security.

Put bluntly, coming to terms with Putin, and putting him in his place is a key requirement going forward.

When President Reagan came to office after the Carter Administration, the President felt that a significant shift in how to deal with Russia was required.

He started by being very clear that is was about rebuilding American power, engaging effectively in information war with the Russians and reworking relationships with key allies to ensure that Russian interests would not split the NATO Alliance and expand Russian power at the expense of the democracies.

He also set in motion what would become the eventual reunification of Germany by challenging the values of the Russian reform government, and challenged Gorbachev to “tear down this wall.”

There was no assumption of moral equivalence between Russian Communism and Western democracy.

He also did not have a vast National Security Council bureaucracy to confuse policy making. Senior policy makers – certainly after the shake out of the first two years – were in place who had the clear support of the President.

Over the course of his Administration a strategy was put in place to reshape the Western relationship with Russia and to create precisely the environment against which Putin has shaped his revenge.

In a piece which I wrote for the French team which addressed the question of the causes of the collapse of the Soviet Empire, I was asked to write a piece on the military factor in that collapse. In that piece, I highlighted that the Russians were faced with a resurgent U.S. military under Reagan but one which was shaping a new approach to concepts of operations, air-land battle, and that the shift being shaped and populated with new technology, simply made their plans for threatening Western Europe with a World War II style of invasion, simply not credible.

But the strategy, which emerged under Reagan, was complex combination of military modernization and a much broader political strategy.

Contemporary analysts rarely recognize this combination, but such a combination is needed now as well to shape a way ahead to deal with Putin. And while the cry has gone out to find Russian scholars to understand Putin and his challenge, a little history is in order, especially because this is EXACTLY the history to which Putin, who has shaped by that history, is responding.

There were several elements to the effort.

First, the Administration sought to highlight a weapons program cancelled under the previous Administration to refund to make a strategic point – the U.S. was going to strengthen the military.

The weapon chosen was the B-1 bomber, and in the first term, the program was brought back and served as a symbol of a new way ahead.

Second, the Soviet military buildup was highlighted as a direct threat against the United States and its allies and information war was initiated to focus directly on the Soviet threat.

Third, new systems were funded and brought into existence along with shaping a new deterrent strategy in Europe.

Fourth, the Euro-Missile crisis was joined, in which the Russians clearly sought to split the NATO Alliance along the lines of nuclear deterrence by introducing new missiles explicitly targeting Europe but not the United States.

I spent much time in the early 1980s visiting Western Europe and engaging in debates in the West about the Euro-missile crisis and the importance of a clear response in terms of weapons and doctrine to the Russian challenge. And I wrote several books on the same as well.

Fifth, there was reconciliation between Reagan and President Mitterrand of France, an odd couple of there ever was one.

But the pair worked together to shape a coherent response to the Russians. We published an essay in French and English, which addressed how the Russians would attack France in case of war.

We leveraged some key Russian General Staff work which made it very clear to the President of the Republic, that the Russians were going to go after the French nuclear deterrent at the outset of any war. Rather than providing a sanctuary, French nuclear weapons made France a key priority target of any military campaign against Europe.

President Mitterrand personally responded to our work with a clear recognition of what this meant for France and was an input to his rethink and in 1983 made a famous speech in the German parliament in which he called for support to the Reagan missile deployment plan in Europe.

Less known was the Reagan-Mitterrand efforts in what would become known later as the Farwell Affair. Here Mitterrand informed Reagan of the extensive Russian technological espionage program in the West, whereby the Russians were able to steal technology in the United States with the collusion of a number of U.S. political, intelligence and industrial officials.

Mitterrand decided to share with President Reagan unique intelligence information, which the French had gathered which should how the Soviets were stealing the US and the West blind on defense industrial information.

The information showed significant Soviet penetrations into the US intelligence and other communities.  The CIA leadership was less than enthusiastic about working with a “socialist” President with “communists” in his government. 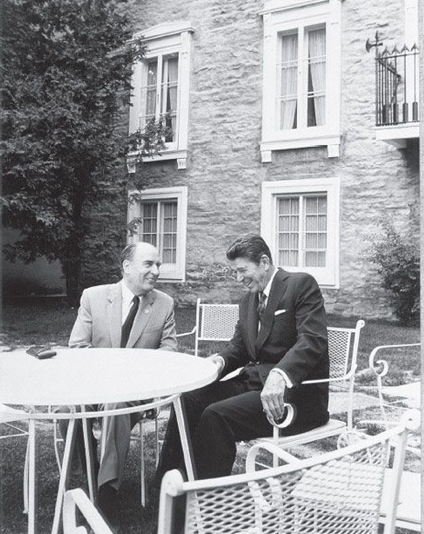 Fortunately, Mitterrand provided the leadership to engage Reagan, and Reagan remembered that as President it was his responsibility to provide for US national security, not the intelligence community.

Eventually, the Russian espionage network was broken and Reagan launched the Star Wars program in part because he sensed that the Russians could not technologically respond, and the impact upon the thinking of the Russian leadership about their inability to respond would have strategic consequences. It did and was part of the military factor in the collapse of the Soviet Union.

Another strategic dynamic was the Spanish debate about the entrance into NATO.

Here the new Spanish Administration in the 1980s, faced a significant debate about whether the US involvement with Franco meant that Spain needed to attenuate its relationship with the United States and go its own way, and to NOT join NATO.

The Russians were well aware that if the new Spain joined NATO and shaped a modern democratic military, this meant that they faced a two flank defense in depth Alliance. This meant as well that the priority on the North Atlantic would be compromised as the United States and the NATO allies could counter North Atlantic military pressures with counter pressures from the South.

With my colleague Professor Kenneth Maxwell, I engaged in debate in Spain about the importance of democratic Spain in NATO. We held a conference in Toledo Spain in 1984 which was part of the public debate, and Susan Clark and I produced a counterpart paper on the Soviet approach to Spain in military terms which made it clear whatever Spain thought about its neutrality, in case of war, the Russians had no intention of honoring it.

Eventually, the Reagan challenge to tear down the wall would be met by the reunification efforts to create the new Germany. While at the Institute of Defense analysis in the mid 1980s, I set up a working group with members of the government to address how one might prepare for the opportunity for German reunification. But it was clear that without the overall Reagan strategy, such an option for the West was simply not on the table.

In short, after Obama, the next President will need a comprehensive strategy built on military strength but combined with an active and practical allied working agenda.

Putin lived through the Reagan strategy and it is against this which he working in the absence of a Reagan.

I will return to this question in a later article.