The Russians Are Coming: How the Syrian Intervention Alters the Conflict

Russian intervention in Syria has introduced a way of war both politically and militarily that is having significant tactical and strategic effects on the entire Middle East and Europe.

Russia has used a small but decisive air and naval force to side with Assad to protect his regime and specifically Damascus. So far the introduction of a relatively small number of combat aircraft in comparison to U.S. and Allied airpower has operationally secured a new air base –Hemeimeem — and equally important bolstered their ability to expand the Syrian naval port of Tartus in the Eastern Mediterranean.

In doing so, they have used airpower decisively in a way the U.S. has not, and have expanded their ability to influence outcomes in the region.

A significantly under appreciated Russian diplomatic and political initiative is a new agreement with Israel. Putin invited the Obama-shunned Israeli leader Prime Minister Netanyahu to Moscow in September to forge a deconfliction agreement between Israel and the Russians. The Israeli diplomatic mission to Moscow included senior Israeli military officials. Consequently, both political and military issues were on the table from the start and the agreement has provided the basis for Israel expanding its capability to defend its interests in Lebanon.

Since then Jordan, America’s closest ally behind Israel has also signed such an agreement. And during this Russian Israel strategic and military process President Obama pulled Secretary Kerry and Ambassador Power out of the UN Speech being given by Prime Minister Netanyahu. It appears that the legacy of President Kennedy is long gone “Let us never negotiate out of fear. But let us never fear to negotiate.” 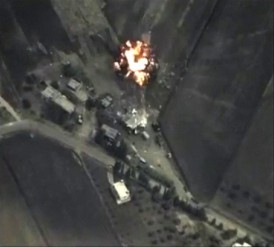 In other words, decisive Russian military actions is more in line with 21st century insertion forces then the ever evolving Counter-Insurgency (COIN) nation building military mantra. Since the Powell characterization of the “if you break it you fix it doctrine,” the U.S. military has been on the path of operations on the ground to reshape political and economic systems, regardless of the inability of an outside power to do so.

In contrast, regardless of the size it is the intangible of combat decisiveness that forms the basis for the Russians expanding their diplomatic role in the region. Russia is being recognized by the key players in the region as a force to contend with.

This historic shift in power relationships is occurring while the U.S. is continuing its slow motion approach to fighting ISIS. The Russians have reset the war by inserting themselves into a key position.

In contrast, U.S. counter-insurgency efforts and nation building in Iraq ended with the U.S. unable to negotiate a status of forces agreement or any real working relationship with Iraq.

And then ISIS arrives. If COIN was so successful in winning the “hearts and minds,” why do we see a very different Russian approach meeting their relatively limited objectives?

As one Iraqi military leader was quoted as saying about the desire to bring the Russians into the Iraqi fight:

The US-led rules, which enforces verification of targets, regularly give IS militants time to save their supplies, equipment and fighters, they said.

“This is an exceptional war and our enemy has no rules,” one of the officers said.

“How [can] you ask me to stick to the rules while my enemy is brutally killing my people every day, enslaving my sisters and destroy my towns and cities?

“Russians have no red lines, no complicated and restricted rules, so it would be easy for us to deal with them,” he said.

Unfortunately, inside the Beltway is still under the influence of slow-motion war COIN advocates. Putin clearly has looked at the limited air campaign in Libya, the no-reaction to the Benghazi strikes, and our slow motion air campaign against ISIS and has concluded that a much shorter, decisive and brutal air campaign will get the kind of political diplomatic results he wants.

Put in other terms, while the Obama Administration and the neo-cons remain wedded to the COIN and slow motion air campaign approaches of the past, the Russians are breaking out a new approach to achieve diplomatic power to reassert Russia’s role in the region.

To understand how the region is changing under the impact of the Russian intervention in Syria we discussed the evolving situation with the leading Israeli expert on Iraq and Syria, Dr. Amatzia Baram, a professor of Middle East History and Director of the Center for Iraq Studies at the University of Haifa.

In effect, the interview with Baram highlighted that the Russians were using their military intervention to achieve a key objective, namely to expand their naval and air presence in the Mediterranean.

And having inserted their force rapidly and with effect, with little concern for collateral damage, the Russians have made a forceful entry, but are not providing an open checkbook for Assad.

The Russians are supporting Assad in keeping the corridor between Damascus and the beach and the shore of the Aluwite Mountains. The Iranians are now controlling most of Assad’s controlled area.

Assad is very worried about it because he feels that even if he stays as a president, the Iranians are taking more and more of Syria. He has enlisted the aid of the Russians to protect his interests. This a secondary Russian objective but an important one to Assad.

And the insertion of force by the Russians has opened up their diplomatic range of maneuver including reaching an agreement with Israel.

Putin met with the Israeli PM in Moscow and senior Israeli and Russian military officers met for a few hours to talk about coordination. There is now a “red” phone line between the head of the Russians Operations Center and the Israeli Air Force.

Maybe it is blue-and-white on one side and red on the other but it’s a direct link.

And this agreement allows Israel and Russia to deal with other issues, such as Lebanon.

I think Israel can reach an agreement with Russia in terms of: You don’t support Hezbollah, you don’t stop us when we want to attack a convoy. We attack a convoy; we shall let you know perhaps 10 minutes before the operation when it will be too late for information to leak. The message will be: Just keep your air planes away.

Baram highlighted the European interest in the Russian actions helping to stabilize Syria and to stop the flow of migrants from the region. But he felt that the best chance for Europe was to cut a deal with Turkey for the Turks to deal with the refugees in exchange for money.

And as for Iranians, they are not really an ally for Russia, but Russia sees both economic and diplomatic opportunities from Iranian engagement in the region. They can leverage what Iran is doing, rather than directing or being responsible in anyway for Iranian objectives.

Russia has the opportunity to expand its influence in Iraq, but is perhaps wary to do so, given the interests of the Iraqi government as well to limit a Russian role. But Russians actions have caught the interest of key players in Iraq who see decisiveness in Russian actions missing in Washington.

And coming to terms with Russia will have to be part of an agreement involving Syria.

The Russians would wish to be a broker for any agreement in which Assad is taken off of the table and the key players behind Assad become part of any future agreement. The paradox here is: because the Russians are more massively invested now in western Syria, they also are more interested in reaching some agreement…..

I see a lot of fatigue on the Iranian and Hezbollah fronts, and that, to my mind, is an opportunity. If I were in Obama’s place, I would start talking to the Russians seriously about some political solution that will recognize Russian interests….

If the US and the Russians together tell the Iranians, “That’s how it’s going to be,” I doubt that the Iranians are going to risk everything in order to explode this agreement. In my view, this is the way to go.

The Russian intervention in Syria creates a strategic threshold.

The Russians are backing a sovereign government, with that government’s approval.

This means that U.S. actions prior to the Russian engagement, whereby aiding “rebels” and inserting special forces was part of the effort takes on a new meaning.

In other words, the Russians are in a military partnership with Syria their joint forces  have every legal right to direct combat action against all enemies including the U.S. military.

And now President Obama has decided to up the ante and invade Syria.

The U.S. will send a small number of U.S. special operations forces into Syria as part of a shift in its strategy against ISIS, White House officials announced Friday.

President Barack Obama has authorized a contingent of fewer than 50 commandos to deploy into northern Syria and work with moderate opposition forces who are fighting the militants.

While the White House has consistently said it would not put U.S. boots on the ground, White House spokesman Josh Earnest insisted that they will be there in a “train, advise and assist mission” — and not in a combat role.

“It will not be their responsibility to lead the charge up the hill,” he said.

But he acknowledged they will be in a perilous situation: “There is no denying the amount of risk they are taking on here.”

Thanks to the White House spokesmen who clarified that “they,” otherwise known as the troops are taking a risk here.

Indeed, what about the safety and security of our troops which seems to be not part of the “strategic calculus?”

President Obama has taken the decision to send forces to Syria.

Not only is it risky but the U.S. is invading a sovereign nation without any legal right to do so.

The U.S. Commander in Chief is putting our ground forces at significant risk of attack by Syrian forces, being bombed by Russian airpower, or for that matter the Iranians who are operating in the area as well.

The President’s actions is putting  U.S, forces directly in military conflict with, Syria, Russia and  Iran, just after the “breakthrough” nuclear agreement with Iran which was supposed to herald a “new day” in the relationship.

And a final question: what about the impact of the President’s decision on the allies?

Were they consulted as well?

In short, a strategic threshold has been crossed, but not just by the Russians.

For earlier articles, see the following: